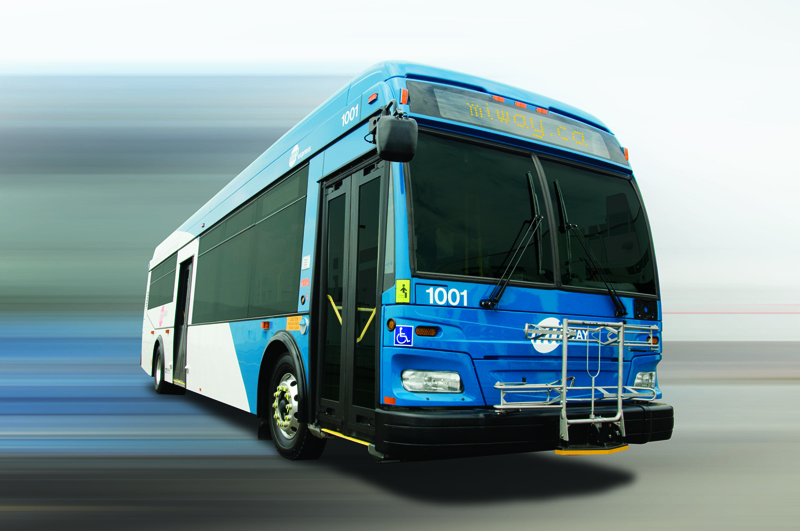 On Wednesday, September 8, UTM saw the arrival of the new Mississauga Transit bus, now named MiWay. The new bus was parked outside the Student Centre, along with Patricia Runzer, a marketing representative for the Transportation and Works Department of the City of Mississauga.

“We’re here to show off our new buses and to show students our new name,” said Runzer.

Students passing by were able to enter the bus, ask questions, and see new changes for themselves. The new buses include features such as more comfortable seating, bigger windows, wider aisles, reading lights, and outlets for laptops and cell phones.

“I think people are most excited about the plugs.  Students can now use their laptops while riding the bus, or read on their way home with the help of the reading lights,” said Runzer.

Students travelling to school on the 110 University Express or the 101 Oakville Express will be able to experience the new MiWay buses starting October 4 when 10 new hybrid-electric buses will begin running on regular routes.

The new buses are part of the Bus Rapid Transit project for the city of Mississauga in partnership with GO Transit, and will ease commuting throughout the GTA.  The BRT, a bus corridor that will run alongside highway 403, will allow for faster travel between Oakville, Mississauga, and Toronto. The project, costing an estimated $249 million, is currently underway and is expected to be completed by 2013.

“This transit project is unprecedented and the largest the City has undertaken in its history,” said Mayor Hazel McCallion in a press release to the city of Mississauga. “It represents the future of Mississauga and our Council’s commitment to develop transit. The BRT will give people more and better transit options and help support continued growth.”

Two types of service will be available through MiWay: MiExpress (blue buses for express travel) and MiLocal (orange buses for local travel).

More information about MiWay, new bus features, and service changes can be found at www.miway.ca. A mobile site is
coming soon and will be available on Blackberry Smart Phones and iPhones. An iPhone app is also in the works to be released in the near future.