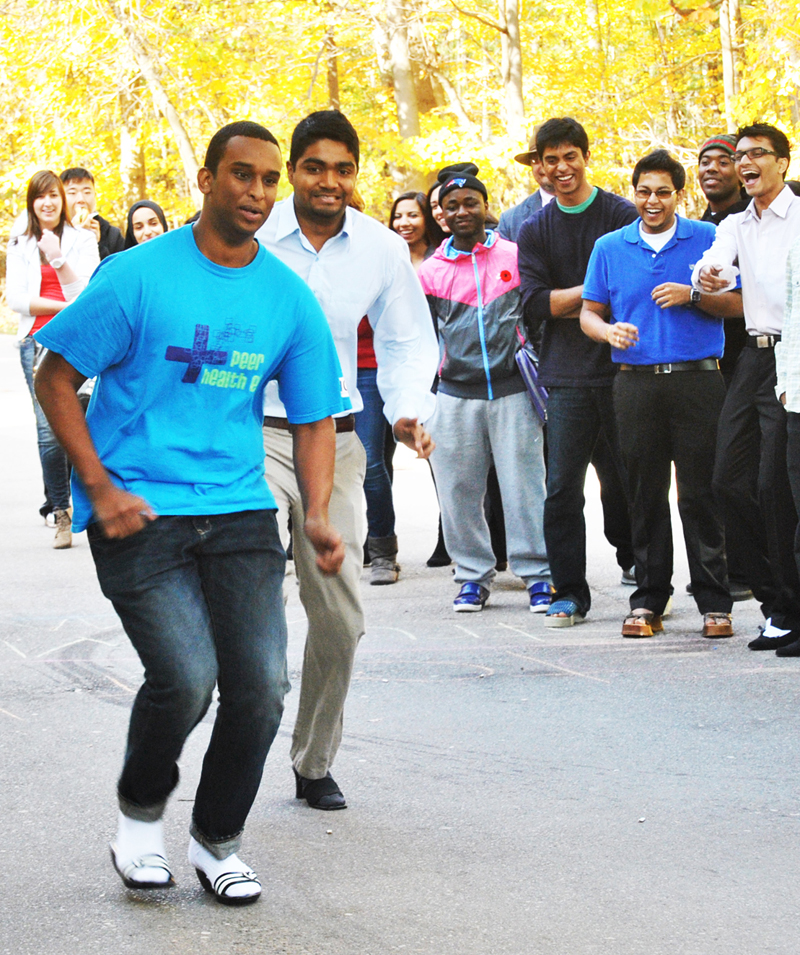 The UTM Women’s Centre held the Walk Five Minutes in Her Shoes event at the Student Centre last Wednesday to raise money and awareness of violence against women. From 1 to 2 p.m., male pledges navigated an obstacle course, catwalked, and posed in heels.

“We hope the event makes people aware that the issue of violence towards women is still going,” said Synthia Truong, the advertisement and promotions coordinator at the UTM Women’s Centre. All proceeds will go to Interim Place, a women’s shelter in Mississauga, said Truong.

After the obstacle course, the pledges lined up again for the catwalk challenge. Pledges, alone or in groups of two or three, walked along a chalk catwalk and posed at the end.

The audience voted, in the form of applause, for their favourite.

“Make it sexy,” said Antara Ashr, the volunteer coordinator at the UTMWC.

Chad Jankowski, who wore a size-12 pair of three-inch pointy-toe pumps, was an audience favourite and won the catwalk challenge.

“It’s very difficult. I’m a runner normally,” said Biasutti. “But I didn’t even come close. I give [women] credit for being able to walk in heels.”

The Women’s Centre also drew the raffle for a gift basket. The basket contained over $100 worth in gift cards and chocolate and was won by Nicole Di’Orio.

After the event, pledges, volunteers, and donors celebrated with pizza, supplied by the Women’s Centre.

“Volunteers did an excellent job,” said Ashra. “It was a group effort.”

In total, the pledges, donations, and raffle tickets raised more than $500 for Interim Place, a shelter for abused women and their children in the Peel Region. Every year Interim Place gives shelter, food, counselling, and advocacy to women in need.

“I hope the event continues next year,” said Nicole Ferreira, a fourth-year psychology student. “Each year more people participate and the event gets bigger and bigger.”

Students interested in joining the Women’s Centre can visit their office at NB131D or email them at utmwc@utoronto.ca. Both men and women are welcome.