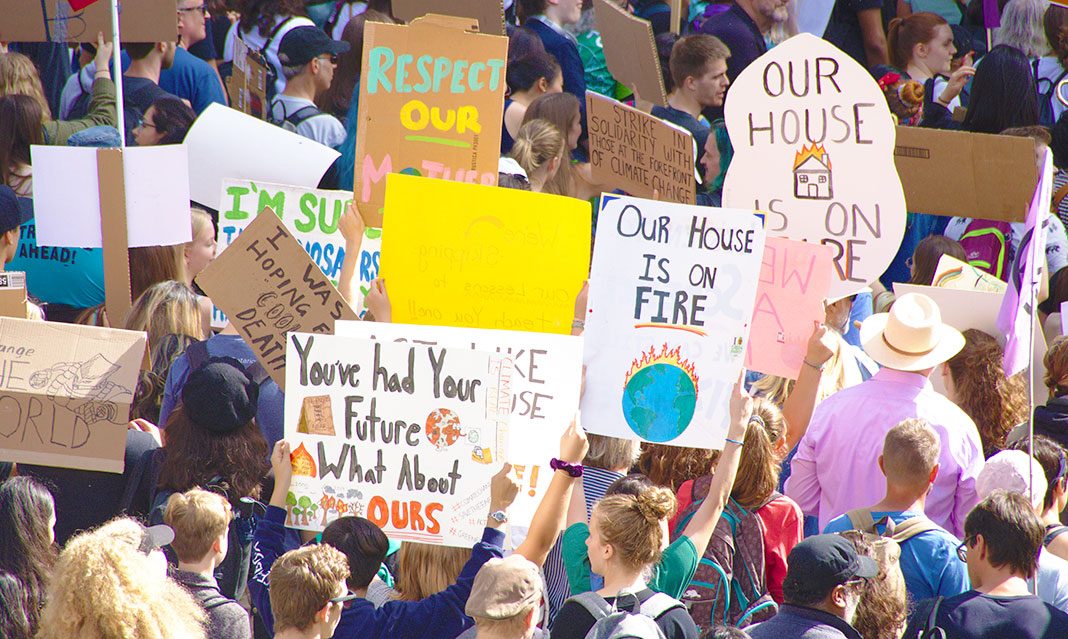 Fridays for Future, the global climate movement inspired by youth activist Greta Thunberg, organized strikes downtown for September 20 and September 27 to align with the UN emergency Global Climate Summit held on September 23. People of all ages and backgrounds gathered at Hart House circle to advocate for climate action, demand an end to fossil fuels, raise awareness, and become informed about ways to tackle the climate crisis.

The event began with live music and performances by co-host Sharrae Lyon, guitarist Shane Free, and beat-boxer and poet The Realije.

Ally, one of the coordinators of Fridays for Future Toronto, read a list of demands for action from the Ontario government put together by Climate Justice Toronto, No One is Illegal, Fight for Fifteen and Fairness, Greenpeace, and many other climate action organizations.

The list includes: the demand for Indigenous rights and sovereignty; for governments to act on the Missing and Murdered Indigenous Women’s report; and for the legal protection of land, water, and life.

The last demand asks for a 65 per cent reduction of greenhouse gases by 2030 and net zero emissions by 2040 in Canada. It demands a low carbon economy and an end to subsidizing fossil fuels, as well as divestment from pipelines. The demand also calls for a price on pollution, for community-owned and governed resources, and infrastructure that is affordable and accessible so that everyone in Canada can lead a sustainable life.

The list of demands also includes a demand for labour rights, migrant rights, and the implementation of universal healthcare and education.

The main portion of the climate rally was the teach-in, developed by co-host Roxy Cohen, where attendees broke into groups run by organizers who each led a discussion on how to talk about the climate crisis with others.

These discussions fell into three categories: talking about the climate crisis with parents, with teachers, and with politicians.

There were also groups that led discussions on how to communicate climate science, mainly to climate deniers, as well as a listening circle where people could let out their feelings and vent about the climate crisis in a positive and safe space.

Many attendees felt that they were “scared” and “beginning to panic,” but that fear did not turn into hopelessness. Many strike-goers, though anxious about the climate crisis, were hopeful.

Valerie, a student attending the rally, said that she felt “optimistic seeing people [and] about seeing this movement.”

Linden, a student volunteer, said “The science is here, the facts are real, [we’re] trying to make it so that everyone knows about it and knows about this movement. There is hope and there are people who care and are trying to make a difference.”

Feeling empowered by the informative teach-in on how to take action and talk about the climate crisis, Hannah, a York University student, said “being here, and attending these certain events, it does give me hope.”

Attendees of the climate rally were of all ages. Polly O’Keefe Priebe held a sign reading “Grandmas for climate action.” Priebe gave praise to youth climate activist Greta Thunberg, and said she attended the rally to fight for the future of children.

“I have a grandchild, and I care about the children of the future. This is the issue of our time. We must act now. Greta’s right,” said Priebe.

After a performance by the children of Oak class from the da Vinci Alternative School, who sang, “young people marching, they’re marching for our lives,” co-host Lyon called for people to come up onto the stage and share anything they’d like with the crowd.

What followed was a collection of some of the youngest attendees at the rally, who took turns talking about climate change to the rest of the crowd.

Children as young as five years old urged rally-goers to “take charge,” “make a difference,” and “write a letter to your MP.”

Some people held up their climate action signs or showed off their various funky animal costumes. A pair of kids led the crowd in a sixty second countdown before proceeding to say, “forty football fields of rainforest disappeared in that minute.”

As the event came to an end, a formal die-in was enacted where all attendees and organizers lay down on the ground to let “Mother Earth hold us,” as co-host Lyon said.

After a short silence, a traditional Jewish Ram Horn was blown.

The horn, says Lyon, was “a call to action, a sound to break into our hearts, to stir our emotions, to blow through the fog, to allow us to see reality, and to recognize that our house is burning and that we are all on the same boat, and that there are no limitations to global warming. Global warming is, in fact, global.”

A final performance to end the event was given by Shessi Sandu, who sang a song of hope in the face of this crisis, singing to the crowd, “we gotta hold it together.”

As the event finished, people left feeling more informed about the climate crisis. They felt better empowered on how to talk about it, found a strong sense of hope in the light of this crisis, and had their courage revived, so that they can take on all the politicians and corporations standing in the way of climate solutions, and fight for their futures and the rights for all people on this Earth to live an accessible, affordable, and sustainable life.