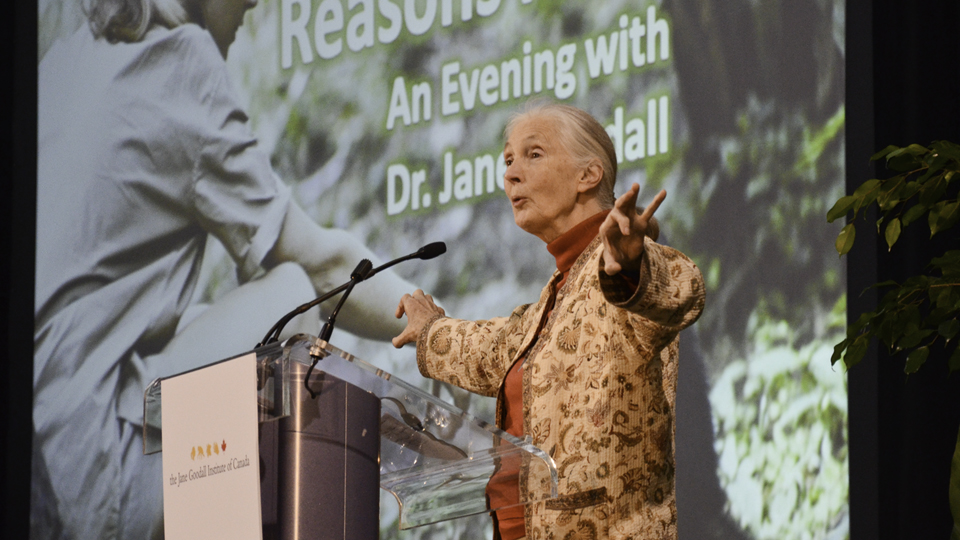 Jane Goodall lectured about her research and environmental initiatives as part of the Snider Lecture series at UTM last Tuesday.

The lecture, entitled “Reasons for Hope”, was held at the RAWC gym, which was filled to capacity. Goodall—a British primatologist, anthropologist, environmentalist, and UN Messenger of Peace—credited her mother with fostering her curiosity and her love for animals in her childhood. She began her research on chimpanzee behaviour at Gombe Stream National Park in Tanzania in 1960.

“She said to me, ‘If you really want something, and you work hard and you take advantage of opportunities and you never give up, you will find a way,’ ”
said Goodall.  “And that’s the message I take to every young person wherever I am in the world today.”

Goodall talked about her experience as a server at a hotel in London at the age of 23, a job she took to save money to go to Africa. A friend had invited her to Kenya to stay at their farm, and she was eventually met and hired by British archaeologist Louis Leakey.

“I try to think of every single day as an adventure, because, honestly, it is. For all of us. We don’t exactly know when we wake up who we’re going to meet, what might happen, how something we love changes the way we think. We may meet somebody who is important to us who may change our lives. We don’t know,” said Goodall. “So, in a way, everything is an adventure.”

Goodall talked about the similarities between chimpanzees and humans, including her breakthrough observation of a chimpanzee using a piece of straw to take termites out of a termite mound (to eat) and stripping off leaves from a twig. Modifying a natural object, she says, makes it a tool.

“Back then we were defined as ‘man the toolmaker’. It was supposed to make us different from the rest of the animals and make us unique,” said Goodall.

She told Leakey about the observation. “And he sent back a telegram saying, ‘Now we must redefine man, redefine tool, or accept chimpanzees as humans.’ ”

Goodall mentioned that she travels 300 days a year to raise awareness and educate people about environmental and animal issues. Goodall founded the Jane Goodall Institute in 1977. JGI’s mission is to “improve global understanding of great apes through research”, “contribute to preservation of great apes and their habitats”, and “create a worldwide network of young people who have learned to care deeply for their human community”.

Goodall also started Roots and Shoots in 1991 as JGI’s global environmental and humanitarian youth program. The program engages more than 150,000 youth from preschool to university in more than 120 countries.

“Think of a tree you love. It starts to grow with little roots and a little shoot. And at that stage you can think how this little thing is going to be a huge tree one day. And it seems so weak and so frail, and yet there is a life-force, a power, a magic in that seed that is so strong that those little roots will reach the water and go through the rocks, and that little shoot will reach the sun and go through the cracks,” said Goodall. “Roots and Shoots is hope. Hundreds of thousands of young people around the world can break through and can make this work. And it is my greatest reason for hope.”

After the lecture, Goodall signed copies of her books and took photographs with attendees. Books were available for sale at the event, including Goodall’s latest book Hope for Animals and Their World: How Endangered Species Are Being Rescued from the Brink.