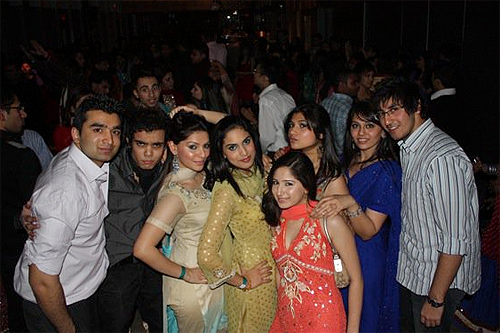 On February 12, over 200 students dressed in traditional clothing attended Kismat Konnection, a Valentine’s Day-themed semi-formal organized by the Hindu Student Council and hosted at the Blind Duck.

According to event planner Maryam Masood, the word “kismat” means fate and destiny. The name Kismat Konnection thus entails “meeting someone and celebrating and cherishing that person, or people who are a part of your destiny,” said Masood.

“We here at HSC feel like it was our destiny to be together and we love each other like a family. Hence, we not only wanted loved ones to celebrate but we also wanted to show our gratitide for the HSC ‘konnection’ which was in our kismat.”
In light of the romantic theme, the Council had offered discounted tickets for couples.

Masood also expressed her hopes of bringing people of different ethnicities together on campus to enjoy in the culture celebrated by the HSC.
“UTM is one of the most diverse campuses in Canada. The Hindu Student Council showed this off with the richness in food diversity and the spectacular dance performances,” said UTMSU VP external Henry Ssali.

The evening of festivities kicked off with kathak and Bollywood dances performed on stage by UTM students Nikhita Paluri and Radhika Batra. Attendees indulged in a South Asian vegetarian dinner that included gulab jamun for dessert.

After the meal, local band Sukon took to the stage and performed original songs from their upcoming album. The band, made up of four musicians, included second-year political science student Shery Amir and third-year commerce student Ibrahim Chohan.

Next, UTM students Saad Tauseef and Ashan Bin Arif took the stage for the main musical event of the night. The duo performed “Billy Jean” by David Cook, “Aarmaan” by Seige and Yeh Jawani from the Bollywood movie Jawani Deewani and other requests.

“The performances were a lot of fun, especially Saad and Ashan. They received a great response from the crowd,” said second-year Nabeel Jafri.
Attendees danced the rest of the evening to music played by DJs from SoundEscape. Prior to the event, students had the opportunity to request songs on their Facebook event page.

Not everything, however, was of a romantic or fun nature: the Council also made sure to include a booth for donations to Haiti.
Students can look forward to HSC’s upcoming event Antakshari (battle of songs) on March 19.