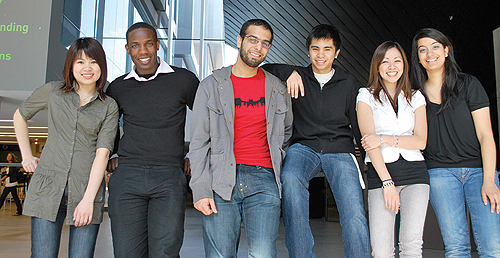 For the last two months, the UTMSU has held caucus meetings during which select student club presidents and UTMSU executives discussed who should run for the UTMSU election that will take place two weeks from today. After the last meeting on February 9, VP Equity Vickita Bhatt was chosen as the unofficial candidate for the presidency, said three participants of the meeting. Bhatt neither confirmed nor denied this, saying only that she had met with individuals regardless of their position at UTM.

During the meetings, UTMSU executives encouraged select club presidents to ask questions and vote on who they believed should run for president of the UTMSU. But according to Henry Ssali, current VP External and now an independent candidate for the presidency, the vote was “already skewed  to [VP Equity] Vickita Bhatt.”

Current UTMSU executive Maria Pilar Galvez joined Bhatt and Ssali in seeking out support from UTMSU and club executives during these meetings, which were held in the South Building Antechamber on three separate occasions: January 27, February 4 and February 9.
The group ruled out Pilar Galvez as presidential candidate during the second meeting on February 4, said attendants of the meeting. A tie vote between Ssali and Bhatt led the group to call a third meeting on February 9 to hear from these two candidates again.

Finally, a majority of the caucus group, which was primarily made up of club presidents, cast its vote in Bhatt’s favour.

HSC president Garima Bhatt, who was part of the “caucus” group, admitted that she was “surprised when asked to be part of it by UTMSU.” As to why the group decided to support the current UTMSU VP Equity, the HSC president said that there had been “deliberation” as well as “speeches and discussion.” Moreover, she maintained that the HSC has not officially endorsed a candidate despite the caucus’s decision.

MSA president Fahad Tariq claims he was asked to be part of the caucus group by UTMSU executives because “our club is large. We were helping in the decision-making process. We just voted on who the UTMSU executives [who are not running] should endorse.” With roughly 1,000 members, the MSA is one of the largest clubs on campus.

According to Tariq, the MSA has not officially selected a candidate to endorse. The president claims that the club remains open to meeting all candidates and will officially endorse a presidential candidate once they meet with everyone during the campaign period.

When a campus student club endorses a candidate, executive members communicate their endorsement through Facebook messages and emails to all its members indicating who they should vote for. Large clubs may thus have a considerable say in who wins the election.

According to VP External Henry Ssali, any student “who feels comfortable and qualified to run for any position should run and let [other] students decide who they want their representatives to be, instead of one that’s hand-picked by 6/10 people.”

Asked why he had come to the meetings if he disagreed with them so much, Ssali said, “I learned about this caucus group through the President’s text message, which indicated that I was required to attend a caucus meeting in the Ante Room at 7 p.m. As VP External, part of my mandate is to attend all meetings organized by the President and as such I attended to fulfill my duty.”

UTMSU President Joey Santiago could not be reached for comment.

VP Internal and Services Carole Au Yeung was one of several UTMSU executives who took part in the caucus meetings. Au Yeun sits on the Elections and Referendum committee and oversees the conduct and supervision of the Elections and Referenda of the UTMSU. Moreover, in her position as VP Internal and Services, Au Yeung participated in the hiring of the elections administrators, the Chief Returning Officer and the Deputy Returning Officer, both of which monitor the election, enforces the election and procedures codes to ensure a fair process.

As of press time, Au Yeu had still not answered emailed questions about whether she thought she could remain impartial during the election period after helping select which candidate the caucus should support.