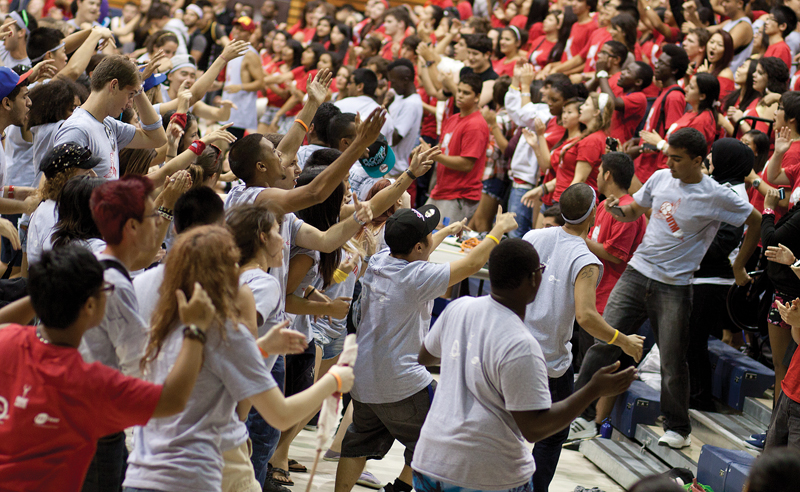 The 1,250 white drawstring bags piled high inside UTM’s Student Centre marked the beginning of a tradition that many first-year post-secondary students look forward to and many upper-year students recall fondly. On Tuesday, August 30, over 1,000 incoming students set foot on the UTM campus for UTMSU’s “Rise Above” Orientation Week.

The first day of Frosh Week gave students a chance to receive cheer training and socialize.

“There are two focuses of the cheers,” said Chris Thompson, VP Campus Life. “Some of the cheers are to pep up the Froshies, who are usually nervous coming in. The other cheers are the competitive cheers, which come out of a long line of friendly competition between the campuses.”

Following the cheer training, students headed to the Mist Theatre to watch the “Dissolve Play”, a skit focusing on harassment. The play was hosted in collaboration with the Campus Police. In the evening, the CCT atrium was transformed into a lavish setting based on the film Avatar to celebrate the themes for the week: social justice, student power, and sustainability and environment.

“As Frosh Leaders, we have the chance to share our experiences with the new students and teach them what UTM spirit is all about,” said Aaron Tupaz, a fourth-year student and Frosh Leader. “Orientation Week will allow them to enter the school year with excitement and more confidence.”

The second day of Orientation Week included events like a free academic orientation, a carnival, and a talent show. The carnival, which was open to all UTM students and free to attend, featured a 50-foot Ferris wheel, a bouncy castle, rock climbing, and a dunk tank. CFRE radio organized a free music event with performances by Shad, Born Ruffians, Lucie Tic, and Gushee.

After the carnival, the talent show was held in the RAWC Gym. After the student performances, a hypnotist took the stage and selected students from the audience to hypnotize. Some people in the audience fell under the hypnotist’s charm. The hypnotist asked mesmerized students to pretend he was invisible, to pretend they were famous dancers, and to speak fluent Japanese.

On Thursday, students were greeted with a packed schedule. In the morning, UTMSU held a workshop to familiarize students with its services. The UTM Athletic Council organized games such as tug-of-war, dodgeball, and potato sack races.

In the afternoon, 26 teams competed in a cheer off for the grand prize: VIP tickets to see Shawn Desman at the pub event later that night. The only questionable incident during the cheer competition was when a female Froshie bent down on her hands and knees while one male member knelt down in front of her and another knelt from behind. At the end of the cheer, the male member kneeling in front of the female sprayed whipped cream into her mouth and on her face.

When asked about equity guidelines at Orientation Week, Ruba El-Kadri, VP Equity of UTMSU, explained that all cheers taught to participants on the first day were screened by an open committee in order to meet strict equity standards. Since teams created original cheers for the competition, the cheers and choreography were not screened beforehand.

“I want to make sure the cheers are screened by me before they’re presented in front of the whole group, which is something that should have been done,” said El- Kadri. “Because of time constraints and because we had warned them beforehand, we were expecting the Frosh Leaders to follow the instructions. But it happens. Everyone has their own idea of equity.”

UTMSU partnered with the Sexual Education Centre and Campus Police to provide leaders with extensive training, which involved three separate training sessions that discussed orientation issues such as equitable conduct and leadership.

After the cheer competition, froshies headed to the pub for the afterparty. One of the opening acts was Iconiq Muzik, who was well-received by the crowd.

When special guest Shawn Desman arrived on stage, Froshies erupted into enormous applause. Desman kept the Froshies intrigued with costume changes, a studded leather jacket that lit up when he sang “Electric”, and an encore performance with his younger brother, Danny Fernandes.

On Friday, students traveled downtown to participate in an Amazing Race and enjoy dinner at Medieval Times.

“The main thing we want to do is foster a relationship between incoming and upper-year students. What I hope [new students] get out of this is connections with other new students so when they’re walking to class, they see people they recognize. It makes life a lot easier,” said Khusbu Patel, Orientation Coordinator. “I hope they also make connections with their Frosh Leaders, so during the year, when they have a question about school or a social event, they can turn to someone who’s already done it, and they’ll have an answer.”

On Friday, September 9, students from all three U of T campuses will parade around downtown Toronto and demonstrate their school spirit.