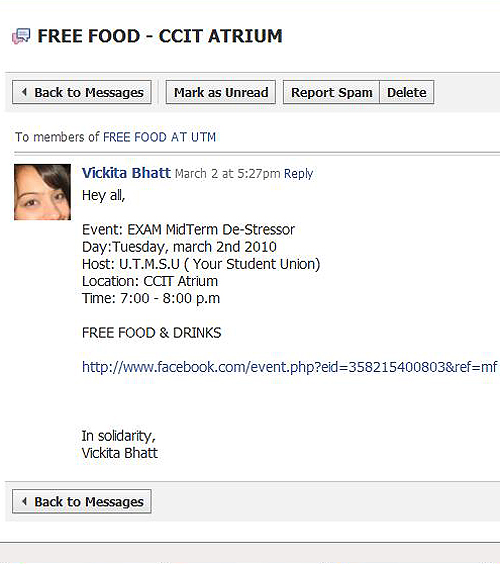 During an emergency UTMSU Board of Directors meeting that took place last Tuesday, several board members voiced concerns about the recent “midterm de-stressor” event, which was organized and carried out by UTMSU VP Equity and current presidential nominee Vickita Bhatt.
Questions were raised over the role of Bhatt in administrating the event, a role that should have fallen under the portfolio of VP Campus Life Andrew Lalla.
Moreover, the Board of Directors questioned the UTMSU executive committee over its decision to hold the event without obtaining funding approval from the Board of Directors or providing meeting minutes to confirm passing funding at the executive committee level. The timing of the event was also questioned as it coincided with Silent Week, when nominees are supposed not to campaign.
The official aim of the de-stressor event was to distribute food and coffee to students. To pay for it, UTMSU used the UTMSU-operated campus food bank. The cost amounted to $440.
The Chief Returning Officer of the elections, Kenny Lee, cited an “abuse of [current union] position” by Bhatt, which results in a penalty of 15 demerit points (Lee later lowered the penalty to 10 demerit points). Along with Bhatt, Grace Yuen, Gilbert Ceaser, Kumari Giles, Munib Sajjad and Marium Chowdhry, all of whom are members of Bhatt’s “Student United” team, were given five demerit points for “abusing union resources” due to their participation in food distribution at the de-stressor event.

After Marc Bressler, an ex-officio member of the board, asked why the invoice for food during the event was paid for by the food bank, executive director Mohammed Hashim replied that the food bank had a surplus of around $6,000 left in the budget after last spring’s referendum, when the food bank received funding of $10,000. Hashim also said the executive committee had held this event to promote the food bank.
The UTMSU, however, did not mention the food bank in any of the Facebook messages they sent to promote the event or in the posters they posted around campus. And in a Letter to the Editor that Bhatt sent to The Medium last week, she wrote that the UTMSU would host the event, making no mention of the food bank and adding that she would be there to speak to students and answer their questions, should her nomination for presidency be accepted.
Bhatt claimed that the food bank was not promoted at the de-stressor event due to the absence of VP Campus Life Andrew Lalla, who was bringing flyers for the food bank. Lalla subsequently cited technical problems with the printer as the reason why the flyers were not printed for the de-stressor event.
Although the CRO has ruled and given Bhatt a penalty for abuse
of position and has given each member of “Students United” demerit points, Bhatt said she will appeal his decision and remains confident in the
outcome.
Bhatt further stated that members from UTMRENEW, UTMSU board members and VP University Affairs Maria Pilar Galvez were also present at the event.
“It is sad that my team and I are being accused of abuse of position at this event,” said Bhatt.
VP External Henry Ssali said that he attended the event “as a volunteer who was kept in the dark regarding the facts pertaining to the event. I left after realizing that my help was not needed.”
Ssali further stated that he supported the idea of a de-stressor for students “but the dynamics in which it was organized were wrong and need to taken as such. The CRO has ruled
on the matter.”