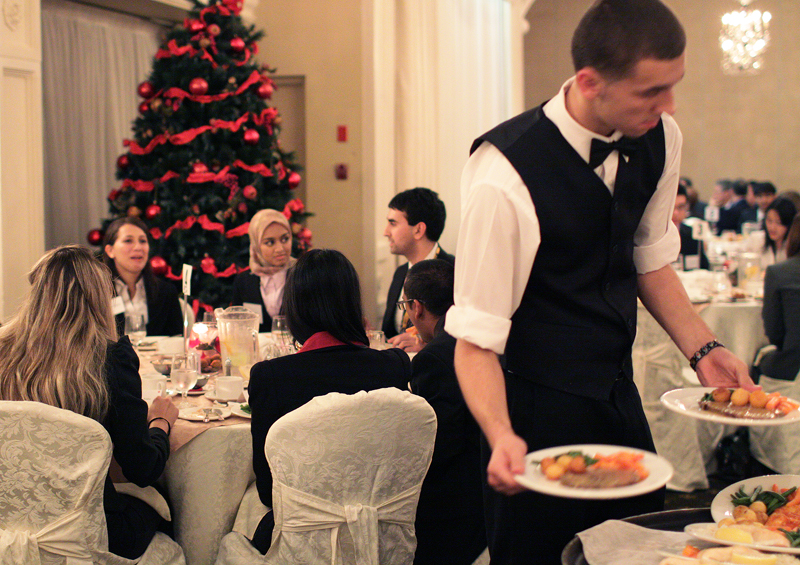 Last Thursday the Undergraduate Commerce Society prided itself in hosting the second annual Business Banquet, with this year’s theme being business dress etiquette. The event was held in Le Treport Convention Centre in Mississauga and catered to commerce and management students. With over 200 guests attending—mainly students, but also representatives from prominent business sponsors and members of the University of Toronto faculty—the event proved to be an exciting net-working opportunity.

“I love how this event is open to all students, professors of different departments, and key sponsors where one is able to actually network!” said Rajiv Dhawan, the president of the Undergraduate Commerce Society. “I am very grateful to the students, the faculty, and the sponsors who had a great role in making this event possible. This was a complete team effort and I owe it all to them.”

Dhawan and his team organized an event which was sponsored by key business firms, including KPMG, Ernst & Young, and Deloit.

“It is not about the suit, but rather how you feel when you put on the suit,” said Bill Thomas, an executive from KPMG, who was the guest speaker for the evening. His speech, which was rather witty at times, was inspirational for many who dream of becoming successful business executives.

“Why can’t we have both?” said Dhawan in response to whether or not one should place more importance on the product of one’s work or the use of fancy suits. He responded with an emphasis on hard work, but he also believes that it is equally important to maintain a professional appearance.

“Mark Zuckerberg, the CEO of Facebook, wears flip-flops even in his executive meetings most probably because of the environment of his business that is mainly a social business,” Dhawan further remarked, emphasizing that Zuckerberg does not have to worry much about his appearance because of the kind of place and business he works at. “It depends on the environment, though when you are dealing with clients it is important to maintain professionalism.”

“The role of fashion in the economy is always present, no matter the demographic,” said Dhawan. Though he had no comment in response to the current economic crisis in certain parts of the world, he maintained that appearance matters, irrespective of the economic conditions of the society.

“UCS is the largest society at UTM and I am grateful for being a member of its executive council,” commented Tina Karamchandani, a second-year commerce student and the professional development director of UCS. UCS encourages all students to become members and enjoy the opportunities the club offers.