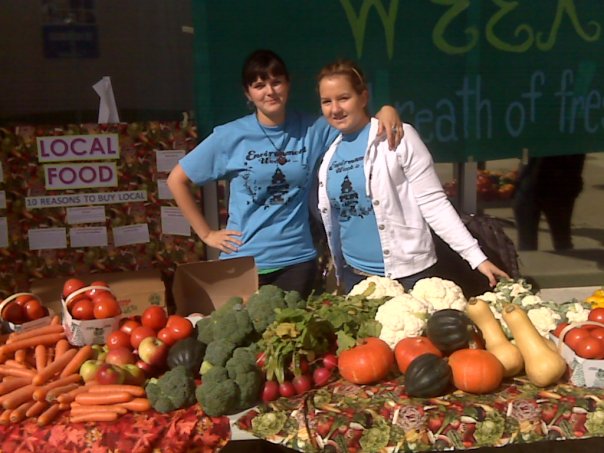 Later in the day, a farmers market was set up in front of the Student Centre. There was also a corn roast barbecue, which was especially popular among the students. In order to emphasize the local food campaign, all the food that was served was grown locally in Milton farms.

On Tuesday, the Ministry gave out free candy apples from Milton apple factories. The apples were organic, local grown fruits. The day finished with an anti-litter event, followed by cleaning up litter on campus.

A Lug-a-Mug event took place in the Student Centre on Wednesday. Starbucks donated coffee that came with the mugs. Approximately 50 students participated in a tree-planting event that was followed by a nature-walking session and more litter cleaning. Impressed by the success of the Lug-a-Mug event, the Ministry plans to hold another one in the future.

On Thursday, volunteers promoted alternative transportation ideas, such as riding a bicycle, taking public transportation or carpooling. Students who used one of such methods to commute to the campus received free breakfast at the Spiegel Hall between 8:30 and 11 a.m. and about 50 students took advantage of this offer. Later in the day, UTM BikeShare gave three bike tours around Mississauga and organized nature trails.

Throughout the Environment Week, UTMSU showed daily presentations and films on environment related subjects to further educate the public on current issues The Ministry of Environment seeks to raise environmental awareness among the UTM community. Their campaigns promote environmentally friendly transportation and encourage students to switch to multi-use bottles rather than single-use plastic water bottles. (A single bottle may take 20 years to decompose in nature and is not very suitable for recycling.) The Ministry of Environment is currently campaigning for the overall banning of plastic bottles throughout campus.

The Ministry also hopes to minimize trash on campus by means of sustainable and efficient waste management. It promotes locally grown food and raises awareness about the environment in order to decrease the human impact on nature and reduce further pollution. Public awareness of these issues, believe Ministry representatives, is the key to achieving the goal of environmental sustainability.