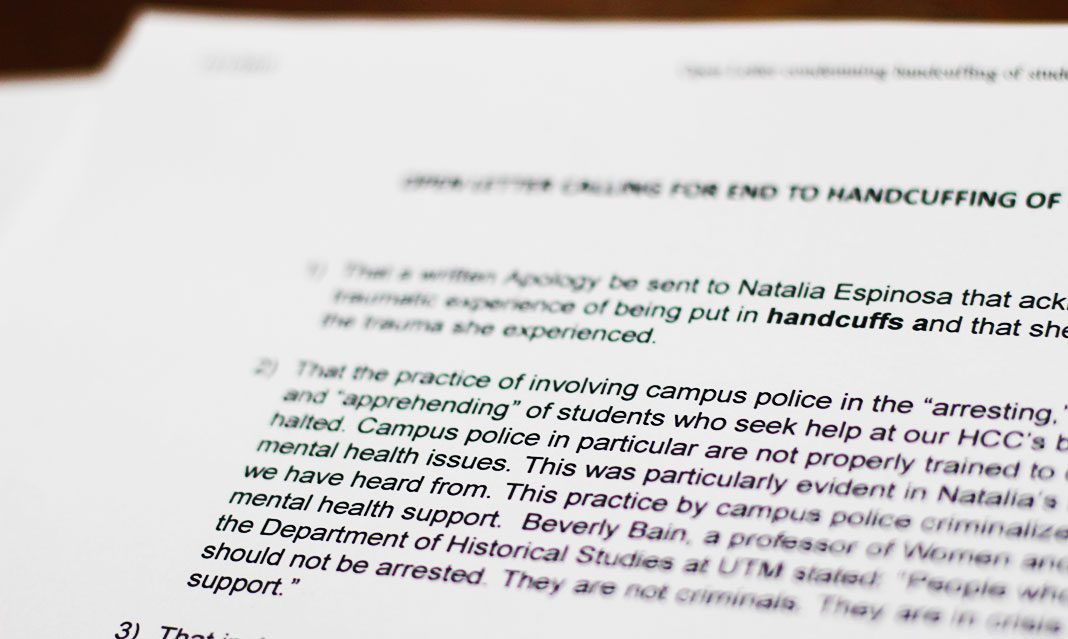 An open letter to the University of Toronto (U of T) administration on the handcuffing treatment of students asking for mental health support was circulated around campus last week.

The open letter, “calling for end to handcuffing of students,” was addressed to U of T president Meric Gertler, acting vice-president and principal Ian Orchard, and vice-principal Amrita Daniere by over 130 U of T faculty and staff. The letter was spearheaded by Beverly Bain, a professor of Women and Gender Studies at the Department of Historical studies, and Vannina Sztainbok and Rosalind Hampton, assistant professors at the Department of Social Justice Education.

The U of T professors called to attention the October 2 handcuffing of Natalia Espinosa, who was seeking mental health support at the Health and Counselling Centre (HCC) when the incident occurred.

“Egregiously, the staff at HCC were not in error, but were following university protocol,” the letter stated. “As faculty and staff who care about the well-being of our students, we write to demand an immediate apology and compensation for the student, that this protocol be immediately removed, and that the administration heed the demands of students to provide a supportive environment for all.”

The letter notes that the act of handcuffing is criminalizing and only serves to create more stigma around mental health in a time where more post-secondary students are experiencing “serious distress” and should be encouraged instead of discouraged to seek help.

“In the past two years alone, there have been at least four reported suicides on the University of Toronto campus,” continues the letter. “As faculty and staff, we are trained to refer students to services, including the HCC. Now, we have to seriously consider whether such a referral could lead to further harm. This leaves us, but more importantly students, bereft of options.”

The U of T professors are particularly concerned for “black students and students of colour who are female on all three of our campuses.” Following Espinosa’s decision to reveal her traumatic experience, many other students, “primarily women of colour,” have shared their experiences of “being handcuffed after seeking mental health support at U of T HCCs.”

The letter then went on to reference the July 2019 Volume 65 issue of the Journal of Canadian Family Physician where Shana Neilson, Andrea Chittle, and Juveria Zaheer of the University of Guelph’s Health and Wellness Centre published an article outlining their concern with campus police handcuffing students while transferring them to the hospital.

“These individuals usually are young, identify as female, are not agitated, are not intoxicated, are not holding weapons, and are cooperative,” states the University of Guelph’s HCC medical practitioners. “We believe that the routine use of handcuffs for the transfer of such patients not only negatively affects health in the present, but also reduces the likelihood that patients will seek medical attention in the future when they are in distress.

“Patients have articulated that the involvement of police, and the use of handcuffs specifically, cause embarrassment and shame, making them feel as if they are perceived as being violent, dangerous, or criminal,” they continued.

In their article, the practitioners detailed how they discovered that “Campus Community Police, as Special Constables of the Guelph Police Service, are compelled to follow the policies of the municipal force.”

“We were advised that the municipal police policy has been interpreted to mandate the use of handcuffs in all situations where police take an individual to custody, including all criminal arrests and all apprehensions under the Ontario Mental Health Act.”

In the letter, U of T faculty and staff stressed that “there is absolutely no need for the continued discourse by U of T administrations and practice by campus police that insist on handcuffing of students as a stipulation of the Ontario Mental Health Act.”

The letter had five demands to the U of T administration, including a written apology and compensation to Natalia Espinosa for her traumatic experience, the end to handcuffing of students seeking mental health support by campus police, the arrangement of private transportation to the hospital and an accompanying health professional should HCC refer a student to the hospital, the ending of the practice of training exam invigilators to call campus police when they encounter a “difficult” student, and for the U of T to comply with students’ demands to participate in university mental health policy discussions.

“The university must do a complete overhaul to provide a caring and supportive environment for all of our students,” concluded the open letter.