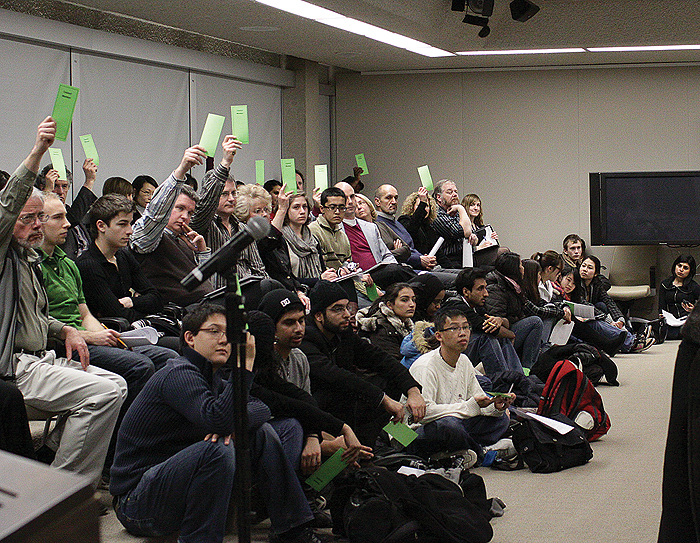 On January 29, voting members of the Erindale College Council approved increases in parking fees, residence fees and meal plan rates. The Council, UTMs highest decision-making body, met to approve the 2010-2011 ancillary budgets.
Parking fees were discussed first, with a proposed 3% fee increase on all parking passes and a dollar increase on the $12 maximum daily pay-and-display charge. Alex Maclsaac, manager of Parking and Transportation, reported that a parking deck, estimated to cost 6.5 million dollars, will be built in lot 8 and will provide about 290 more spaces. Construction is expected to be completed by September.

The profit projected for the coming year from the sale of parking passes is reportedly $93,000, $80,000 of which will be a result of the fee increase. Maclsaac said that the profit will go toward the 6.5 million dollar debt the parking deck will incur.

Instead of resorting to the 25-30% increase that was implemented to build the CCT parking garage a few years ago, the 3% increase should be sufficient to pay off the debt in time.

UTMSU president Joey Santiago pointed out that a large profit has been made in the last few years specifically from parking revenue, and asked where these profits are being allocated if not for the construction of a parking structure. Malsaac told attendees that the funds have been put toward improving other facilities on campus.

Defending the construction plan, Malsaac expressed his confusion with the concerns being raised. He pointed out that students are unhappy about a parking space shortage but complain about the cost of expanding, which needs to be covered by an increase in fees.

Santiago responded by saying students cant afford to pay greater costs to replenish services that were taken away.
Next, Director of Hospitality and Food Services Bill McFadden discussed the direction of food services on campus and why a meal plan rate needed to be increased. Citing various reasons such as natural disasters overseas that affect food production and an upcoming increase in minimum wage, McFadden said Chartwells will have to increase food prices. As a result, the University will raise the cost of residence meal plans by 4.1%.

To improve food services as the campus grows, the new instructional centre will include a cafeteria, and Administration is in the process of approving a self-serve Tim Hortons.

The discussion period on this particular motion caused a heated debate. Santiago inquired about the left-over funds on student meal plans that cannot be rolled over to the next year. McFadden responded that the value students get compared to what they dont use is monitored closely and the department finds it to be a suitable balance.

Following McFaddens statement, UTMSU VP equity Vickita Bhatt spoke against the motion but was ruled out of order twice by the chair as she questioned the purpose and fairness of mandatory meal plans.

VP external Henry Ssali asked the reason that flex dollars are not accepted at different times at certain locations on campus. The chair said that none of these issues were relevant to the budget; however, a question on food diversity was accepted.

Despite the statements from UTMSU against the fee increases, the motion passed.

The last motion introduced for a fee increase was residence fees. Last year, undergraduate residence fees were raised 5.5%; this year, an additional 5.2% increase passed. Fifty cents on every dollar goes toward paying off a large mortgage debt incurred by the University to expand residence services. Residence students will get improved furniture, repaired walkways and other necessities.

Representatives from both the UTM Association of Graduate Students and the Student Advisory Committee supported the increases, stating that they had worked closely with the Undergraduate Residence Council and Director of Residence Dale Mullings.

Granted speaking rights, a representative from the Student Advisory Committee said that the budget is fiscally responsible, and will prevent future students from having to make larger sacrifices than those of the students of today.

Residence Council President Marc Bressler also received speaking rights for the purpose of announcing information. Bressler expressed his disagreement with the residence fee increase and insisted that students cannot afford greater costs. When Bressler mentioned the Service Ancillaries Review Group, the chair ruled Bressler out of order as the item was not on the agenda.

Former VP external Dhanajai Kohli complained about Bressler being ruled out of order, claiming that previous speakers had not been ruled out when they gave their personal opinions about participation in the decision because they had supported the Councils motion, to which the chair responded that Bressler had diverted from relevant information.

Santiago proposed that the motion be postponed until the next meeting to clarify details and for members to make a better informed decision.

You are voting on something that is not being endorsed by those who it affects the most, said the UTMSU president.

Maclsaac informed members that the ancillary budget needed to be passed before the next SARG meeting in February and could not be postponed until the next ECC meeting in March. `

Mullings also clarified that three undergraduate residence council members, including Bressler, were consulted, and they had all previously voted in favour of the increase.