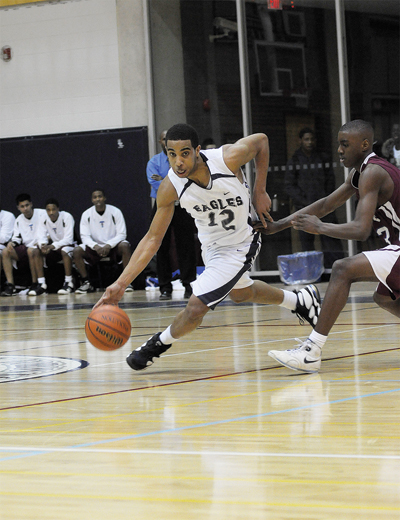 The last time the UTM Eagles and UTSC Maroons played each other, UTM won by three points. That was during the regular season when the stakes werent so high. UTM has defeated UTSC four times in the last five years. Clearly, this year, during the mens division-one basketball championship game, UTSC was determined for things to work out a little differently.

But the Eagles made sure they were prepared for anything UTSC were going to throw their way, working hard and long the night before the Finals. The Eagles delghted UTM on wednesday night as they edged out UTSC in the championship final. Photos/Matthew Filipowich

The Eagles focused on working in the paint, their shots, defense, and all the little holes and weaknesses evident in their past UTSC games. The last time we played them, we played well but a little inconsistently. So we worked on all those inconsistencies in practice, said Annish Bhalla, UTMs assistant coach.

The RAWC gym buzzed with school spirit just before the championship game tipped off. UTM fans, rowdy and ready for action, packed one side of the bleachers from top to bottom. Chants of UTM, UTM echoed from the crowd, sparking some interesting tension with the UTSC fans in attendance. Meanwhile, UTMAC female representatives strutted around the gym in belly tops with UTM painted across their bellies, handing out raffle tickets. This was March Madness.

The first half was tight with both teams playing off several turnovers. UTSC had three steals within the first minute and flustered the Eagles with a full court press that seemed unbreakable. Fed up with all the turnovers, UTM star forward Alan Carty broke through the press single-handedly with his crafty dribbling and strong finish to the hoop.

But the Maroons balled with more guts. They looked hungrier and for the first ten minutes played like they wanted it more. They also played with a lot of urgency and concentration, hitting 63 per cent from the line and converting on twelve of nineteen. UTM produced a dismal 40 per cent from the charity stripe, a problem that kept them trailing 46-53 at the break.

During the half-time pep talk, head coach Antony Nembhard made clear to his team how he felt: Were playing well offensively but very poor defensively. Theyre getting a lot of lay-ups that they shouldnt have gotten.

The talk seemed to inspire the Eagles — in the second half, UTMs Ambrish Patel started an offensive tear scoring from all angles: mid-range jump-shots, reverse lay-ups, three-pointers, and of course, the floater. UTSC had no remedy for Patel or Carty who played hard and hustled non-stop across the court.

In the stands, the energy level skyrocketed when UTSC fans started trash-talking to the home fans. And it was hard not to get excited. The adrenaline was contagious when bench players from both teams added to the mix with their own chants.

The game remained close down the stretch. Both squads traded baskets until Patel drained a clutch three to put the Eagles up by one. However, UTM fans had their hearts in their mouths when Patel suffered a nasty collision with an opposing player and collapsed to the ground. Patel sat out for the rest of the game. And this simply paved the way for Carty to take over the reins.

For Carty, who is set to graduate this summer, the championship game was his last time to shine. With Patel out, Carty knew the onus was on him to step up if the Eagles held any hope of fending off the Maroons towards victory.

And step up he did.

The Eagles pushed the lead to nine within the last minute. UTSC fouled Carty in the dying seconds, placing him on the line to score the last point of the game and his career. UTM won 95-85 with Carty retiring in style.

I had a solid game and it feels good, said Carty, who finished with 24 points, after the game. No complaints. Gotta go out on top.