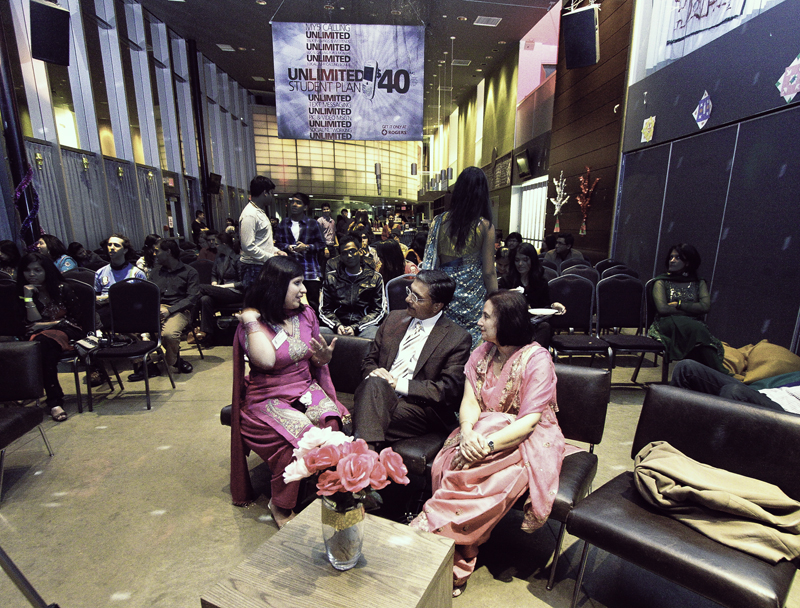 On Friday, October 29, the Hindu Student Council hosted their fifth annual Diwali Dhamaka in the Blind Duck. The events included performances, a three-course dinner, and an open dance. Over 400 students attended.

Diwali is a five-day celebration, usually beginning near November. Diwali in 2010 actually falls on November 5, but this year, the festival was held a week early.

In Hinduism, Diwali is the celebration of Rama’s victorious return from his battle with Ravana, and the inner light that overpowers evil. It is celebrated across India and the rest of the world. While Diwali is important to Hinduism, Jainism, and Sikhism, the HSC made sure to welcome everyone to their event.

“It’s all about unity,” said Gupta. “India has every religion, and I know our name is Hindu Student Council, but this festival really is about bringing everyone together.”

The night began with a series of dances from UTM students and comic skits by the three MCs. Modern, traditional, and Bollywood dances were performed by beginners and classically trained dancers. The events finished with a performance by a four-man band led by Saad Tauseef and Ahsan Bin Arif. Dinner and dancing followed until 1 a.m.

“I want you all to know that my wife and I, since we’ve been in Australia and Montreal and Waterloo, we finally feel like we’ve arrived home,” said UTM’s new vice-principal, Deep Saini, midway through the performances. Saini skipped another party to attend the Diwali Dhamaka.

“Diwali is all about light—light in our brains and in our heads and in our hearts,” Saini observed, adding that he was incredibly proud of the attendees, and youth across Canada working to build a Canadian identity and a multicultural society that celebrates our common humanity. “I will definitely be very mad if you don’t invite me again next year!” he added, to applause and cheers.

Alisha Mann, dance coordinator for the South Asian Alliance, spent two weeks preparing her performance—a modern dance number. She also performed at the HSC’s last Diwali. “It was nerve-wracking the first few minutes, but it’s a lot of fun. It always is.”

At the conclusion of the performance, MC Wasah Malik praised the HSC and its growth, which he has seen throughout his years at UTM. The first Diwali celebration five years ago had about 40 attendees, while 2010’s Diwali Damakha saw over ten times that number.

“The performances were so fun!” said a student in attendance. “I feel like I’m back home.”