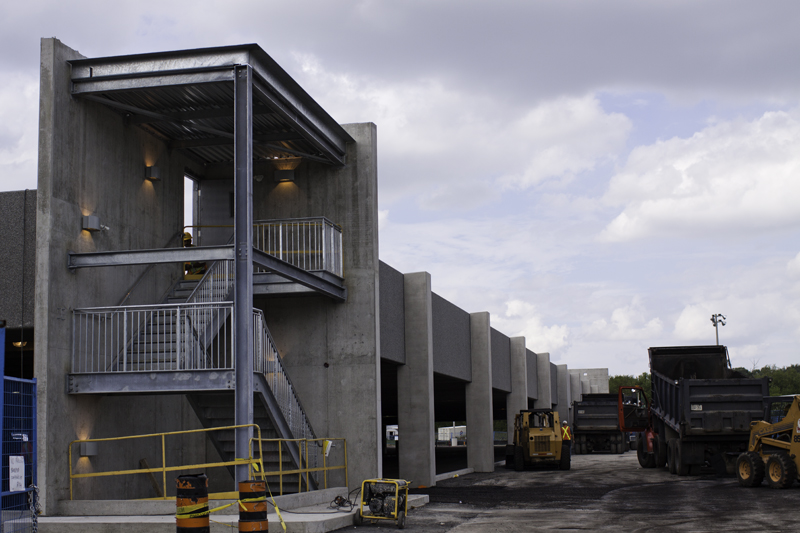 Construction at UTM continues with the building of a new parking deck in lot 8 across from the RAWC. The construction began on April 5, 2010, and was set to be completed at the beginning of the 2010-2011 school year.

The parking deck will add 291 spaces to the lot and costs an estimated $6.5 million. There will still be a deficit of parking space, which is causing problems for many UTM students, but it is a start. Additional levels may be added to the deck at a later time if
necessary.

“People will be inconvenienced because of the limited parking. It’s a huge challenge for us. The excess parking capacity we had last year, based on detailed counts of vehicles on campus during peak hours, will make up for some of the spaces being taken out of service. And we will also be looking at contingency plans in the event that parking demand far outstrips availability,” said Paul Donoghue, UTM’s chief administrative officer, in an interview with the Mississauga News.

With the construction of the new buildings, UTM is expected to increase its student population by nearly 4,000 students in the next few years, to a total of 15,000 students.  The construction of the new parking deck was planned as an environmentally friendly project. Instead of paving over some of UTM’s prominent grass and wooded areas, a second level was added to a pre-existing lot. If parking issues continue, further decks may be added to lot 8, eventually creating a large parking structure.

“Being environmentally sensitive and responsible is the only acceptable alternative. Building a surface lot would have required destruction of one of our defining elements—the remarkable green space that surrounds the campus,” said Donoghue in a press release for the University of Toronto.

Both new buildings will meet and perhaps even exceed the Leadership in Energy and Environmental Design (LEED) ratings.