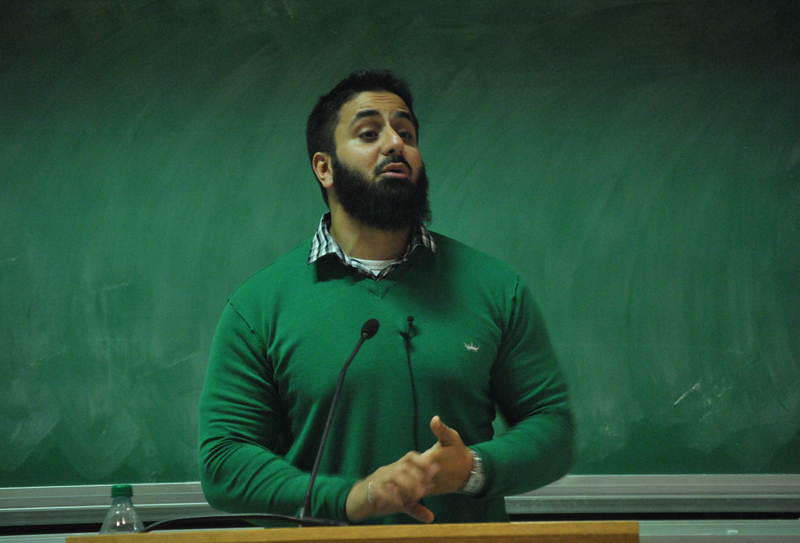 Over 100 students attended the talk given by Tzortzis, an international lecturer for the Islam Education and Research Academy. In light of the contentious topic, “Proving the Existence of God”, Tzortzis provided comic relief to keep the audience intrigued.

“Has everyone heard of the Big Bang?” Tzortzis asked the audience. “And I don’t mean the thing that happens after too many curries.”

Tzortzis incorporated the Qur’an into his proof the existence of God. He also cited well-known Western philosophers and atheistic literature, provided counterarguments, and explained the various arguments about the creation of the universe. After juxtaposing different sides of the debate, Tzortzis settled on the necessity of God as the creator and the provider of objective moral truth for that creation.

Since the topic was debated according the Islamic values, Tzortzis spend the second half of the lecture discussing the validity of the Qur’an as holy scripture, citing historical context and linguistic uniqueness. He explained that the Qur’an includes varieties of poetry and prose that do not appear in other Arabic documents of the era.

The two-hour lecture and discussion were scheduled to end at 9 p.m., but questions kept pouring in well after the allotted time. Tzortzis gladly obliged, remaining at the podium an hour later than originally planned.

“The MSA held this lecture to reach out to people who are willing to have dialogue on the existence of God, and to teach people who do believe in God how to prove His existence,” said Syed Shaheryar Gillani, MSA’s marketing director. “UTM is known to be a very tolerant campus where discussions like these can happen with respect for each other.”

The UTM MSA, one of the largest and most active clubs on campus, offers the Community Lecture Series to educate Muslim students and offer insight for those interested. Lectures are held periodically throughout the year, and all students are invited to attend.

“I was curious how Muslims would argue for the existence of God compared to the Christian arguments I’m more familiar with, and I found it mostly all the same or parallel,” said Paul Filaber, a third-year student and member of the UTM Catholic Student Club. “The talk was welcoming. I find that we’re all open; we just need a bit of initiative.”