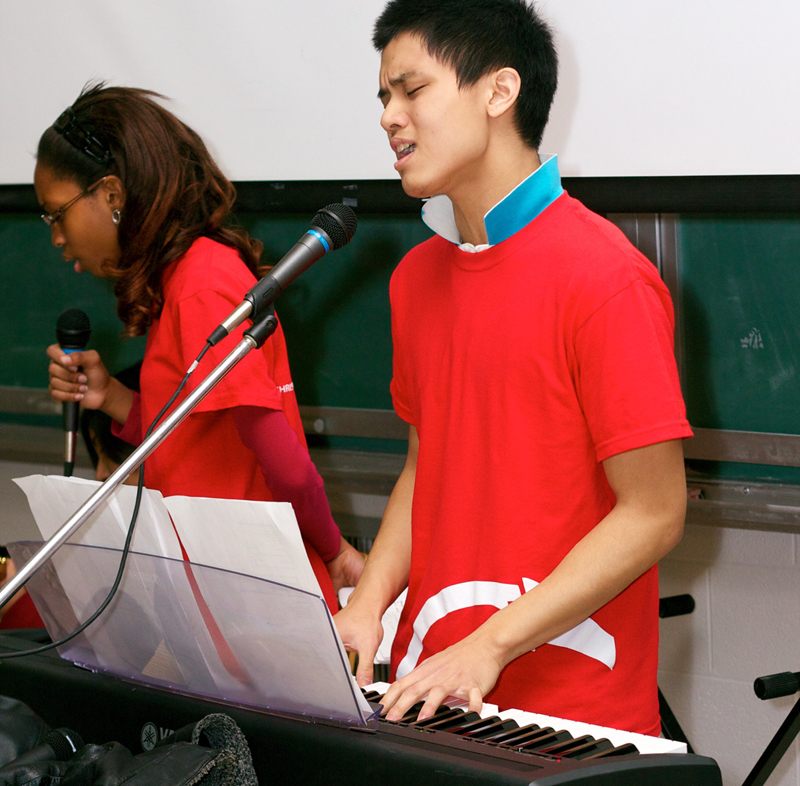 Performers came prepared with instruments, poetry, play scripts, and short messages they wanted to share with the attendees.

“Christian Unity Week at UTM aspires to bring together Christians from all nations, backgrounds, and languages, hoping to unite them for the one purpose of sharing the good news of Christianity with other UTM students,” said Jonathan Wahab, president of CUA. “The talent show would be said by many to be the most anticipated event of the year for Christian Unity event-goers.”

“We believe every individual is unique,” continued Wahab. “Whether it be people that can sing a song, perform a skit, recite a poem, play an instrument, lick their elbows, juggle ‘devil’ sticks, or anything at all, we hope that this be an opportunity for people to come and offer a bit of themselves. We also hope that students that come out will have their questions about Christianity answered.”

The Christian Unity Band started the night off with Christian songs of worship. The band’s vision and hope is that Christians from all different clubs on campus come out and unite in voice and fellowship.

Tarak George, the emcee of the talent show, came up first on the list of performers.

“I was asked by my friend why I believe in God and all I told him was ‘Come to the talent show, I’ll show you why.’ So here I am—this is the reason that I believe in what I believe,” said George, who played an electric guitar solo accompanied by a video presentation of the beauty of nature.

Performances that followed consisted of violin solos, acoustic songs, rap, poetry recitals, and skits. Most of the performances included messages of what Christianity means to them and personal testimonies about life experiences.

The night ended with free pizza.

“We give out free pizza every month at our events because we believe that God has blessed us with funding and we hope to cater not only to the students spiritually, but physically too—at the same time hoping to have a chance to get to know the students more personally,” said Wahab when asked about the pizza charity.

The talent show is only one of the many events CUA hosted during the week. The Christian Unity band performed on Monday and Thursday from 2 to 3 p.m. in the Blind Duck. Christian volunteers gave out 1,200 free bibles and tons of free Christian-themed books on campus throughout the week, while free hot chocolate and Starbucks coffee were handed out outside the Student Centre.

“We hope to not only share a spiritual fulfillment with the students, but also keep them physically warm—with hot drinks!—amidst the cold and crazy weather this week,” said Wahab.

CUA holds monthly events on the last Thursday of every month during the school year. All are welcome to attend.

For more information about CUA or other Christian clubs on campus, students are asked to e-mail Jonathan Wahab at jwahab@gmail.com.