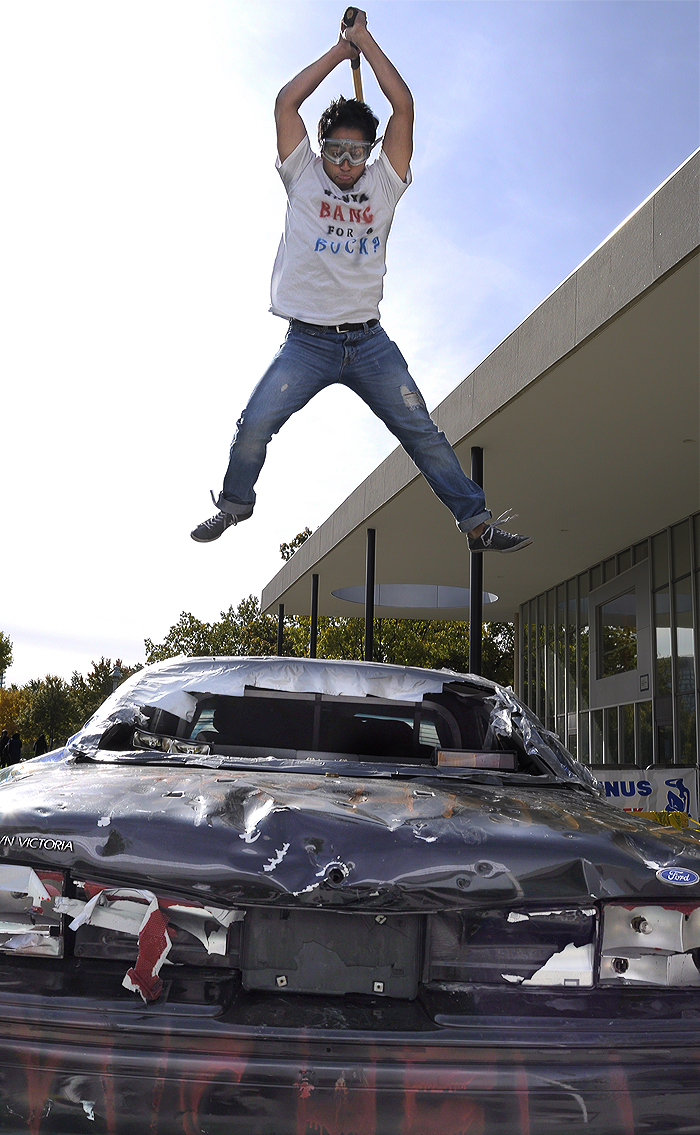 As students made their way to morning classes last Thursday, many paused to consider the commotion in front of the Student Centre. The area typically functions as a walkway for students but was transformed as students gathered to watch their comrades release their frustration by pounding on a black Ford. Cheers and screams filled the air at each swing of a sledgehammer and each blow of a steel bat. A stereo played Mariah Carey songs from under a large tent, where members of the UTM Meal Exchange received student donations in exchange for a go at the car, which was donated by Lyons Auto Body. Within the first hour, the Fords back lights were smashed, the bumper mashed, the windows dented and the muffler hung off the car.

Who else would like to take a shot? All proceeds will go to charity! shouted a member of the UTM Meal Exchange.

Anthony Simone, an executive member of UTM Meal Exchange, explained the history of their non-profit organization. Meal Exchange is a national charity with 40 chapters across Canada. Our mission is to fight food security issues in local communities. Statistics on the Meal Exchange website show that 753,458 people use a food bank per month, about 35% of food banks have difficulty to meet demands and 41% of food bank clients are children.

UTM Meal Exchange was initially reluctant to implement the Bang for a Buck fundraiser. After asking UTMSU and Campus Police, they were directed to meet with Dean of Student Affairs Mark Overton. Dean Overton approved their idea, so they were able to move ahead.

UTM Meal Exchange took safety measures such as providing goggles and gloves and even required participants to sign a waiver form.

Members of the UTM Meal Exchange expressed how happy they were to see the appreciation of students around campus for Bang for a Buck. When you see the campus getting involved, you feel appreciated. Also, its a lot of fun, said Simone.

One student said, This is one of the smartest fundraisers Ive seen on campus.
Meal Exchange promises more events this year that will raise funds and awareness for hunger. The next event is Trick of Eat: volunteers along with the UTM Meal Exchange will go door to door in various neighbourhoods dressed in costumes to collect food items for the Mississauga Food Bank. Last year, UTM Meal Exchange was able to fundraise 800 pounds of food in four hours, which were donated to the UTM Food Bank. If you would like to get involved, you can register for the event at www.trickoreat.ca.