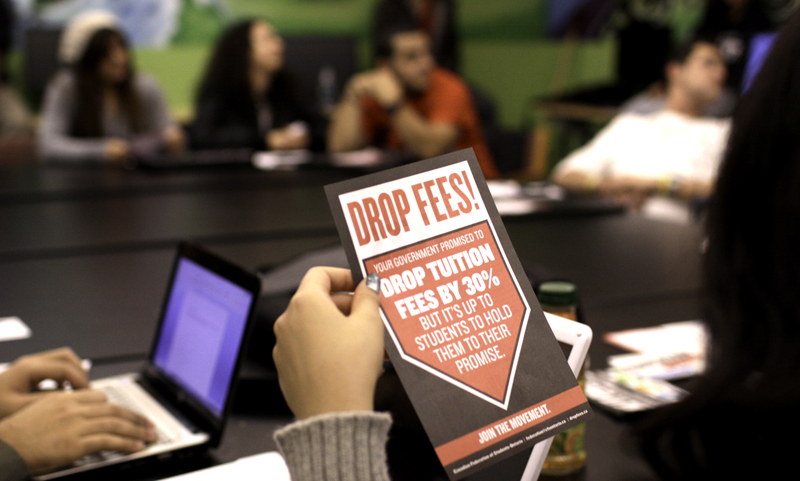 UTMSU held the year’s first Drop Fees coalition meeting last Tuesday. At the meeting they discussed how to raise awareness for the Drop Fees Rally, scheduled for February 1.

UTMSU has suggested that during the provincial election in Ontario the Liberal Party promised a 30% reduction in Ontario student fees. In reality, the Liberal party promised to provide grants of $1,600 to students from families with incomes of less $160,000. The 30% reduction refers to the ratio of the grant to the average tuition (around $5,300).

The discrepancy aside, student unions across Ontario will once again rally for a decrease in tuition fees.

“Even though they promised a 30% drop, a reduction is actually a lie,” said VP External Munib Sajjad at the beginning of the meeting. Sajjad also explained that part-time students and international student are ineligible.

“If international students want their fees dropped, then their presence needs to be shown,” said Sajjad.

Along with a fee reduction for all students, Sajjad is also lobbying for a national education act that would cover all university students across Canada.

“We’ve been lobbying for years but haven’t seen a change,” said Sajjad. “We need to get students together. We want to drop fees and make sure everyone is attached to it.”

The coalition’s goal is to get 2,000 UTM students out into the streets for the rally in February.

Other attendees’ visions for the goals of the campaign, not covered by the Liberals’ election promise, included government subsidization of education, a freeze in tuition fees, support of the community, prioritization of education and health care, and a united campus.

The discussion digressed to a comparison between the Drop Fees campaign in Ontario and campaigns in other countries. Chris Thompson cited the student strikes in Santiago, Chile.

In August of this year, 150,000 students took to the street of Santiago to protest for more funding, better teacher training, and scholarships. The protests ended in tear gas and arrests when the student leaders lost control of the crowd.

Walied Khogali, UTMSU’s executive coordinator, said that before any changes can happen, the coalition needs a strategy. Khogali proposed an entire week dedicated to lobbying, coordinated with other student organizations in the GTA. He suggested making viral YouTube videos of students and a “Party for a Cause” to raise awareness of the coalition.

“If you’re taking the bus, say hi to your bus driver and plug [the rally]. Ask if you can make an announcement. Most of them are so nice, they’ll let you,” said Khogali.

He also suggested embedded journalists from the national and ethnic newspapers and chasing celebrity endorsement.

“ ‘Debt is guaranteed: you have to accept it and live with it’—I don’t believe this, and I don’t think it’s right,” said Khogali. “We want to sit around this table next year and celebrate that fees haven’t gone up.”

For the rest of November, the UTMSU and the coalition will be hosting information tables across the campus. Yasmine Youssef, the associate VP Equity, pointed out that the UTM coalition needs to do more than raise awareness about the Drop Fees campaign.

“We need to educate people. People know about it, but they’re not angry about it yet. People need to be angry before they’ll do anything,” said Youssef.

The next coalition meeting is scheduled for Tuesday at 5 p.m. in the Green Room at the Student Centre. The meeting is open to everyone.