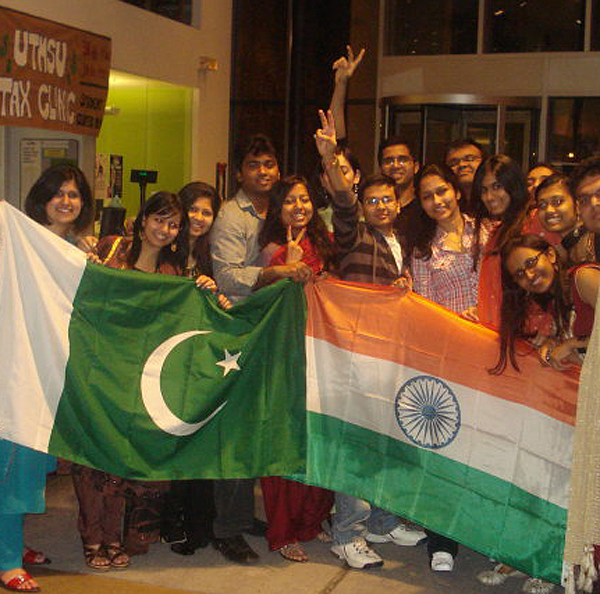 Last Friday evening, the Hindu Students Council organized its annual Holi Antakshari. The event was attended by approximately 200 students and celebrated peace and harmony between people of all countries and races. It also focused on a musical competition between the Maharajas (India) and the Sultans (Pakistan).
According to HSC executive Garima Bhatt, Holi is a cultural festival in India where people of all religions get together and celebrate the season “by throwing color and water on one another.” Music is also a significant part of the event, which started with the national anthems of India and Pakistan.
Holi Antakshari traditionally attempted to make people forget all differences and hostilities between the two countries, promoting a message of peace through avenues of artistic expression such as Bollywood movies and musical game-play.
Most of the attendees dressed up in traditional shalwar kameez and other South Asian clothing to emphasize the similarities in dress and attire between the two countries. Traditional South Asian food such as samosas and other refreshments were served to the students.
Antakshari is a very popular game in India and Pakistan. Its name is derived from the Sanskrit words Ant, which means “end,” and Akshar, which means “alphabet.” The term refers to a game where one team sings a song and the other team picks up on the last alphabet of the last word sung by the opposing team before proposing another song. The team with the most successes at this art of rhyming ends up winning the round.
HSC executives used variants of the traditional Antakshari and divided their game into an innovative five rounds. The first round was Mr. Ya Miss (Mr. or Ms.), where the players were shown half the face of a Bollywood actor or actress and they had to guess who it was and sing a song from the movie where they both acted in. Another round was based on the Sur (melodic composition) of a Bollywood song, where an instrumental was played and the team had to guess and sing the song.
The third round was Tasveer or Pictionary. After images from a Bollywood film were shown, the attendees had to guess the movie and the song. The fourth round was the Golmaal, where the different audio and video from films were combined and the teams had to sing the song in the video. The final round was Chota-Chetan (Baby Chetan), where the team had to guess the name of the actor or actress from their baby pictures.
HSC executive Parikh said that Hindu Student Council strives to emulate Gandhi’s statement: “Be the change you want to be” and spread the message of peace and pluralism.
The funds raised from the event will be donated for the humanitarian reconstruction efforts in Haiti.