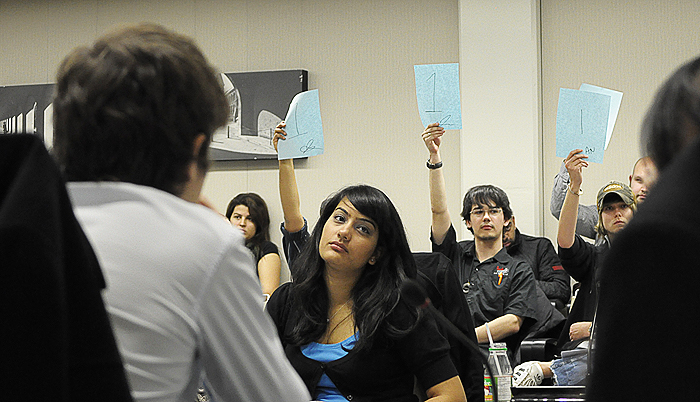 An investigation conducted by The Medium has exposed a mishandling of the collection and distribution of proxy forms at UTM for the 2009 Annual General Meeting of the University of Toronto Students Union, which took place last Thursday at the St. George campus.

Proxy forms allow one student to hold up to as many as eleven votes, provided the voter gets ten other full-time students to sign the proxy form and include their student numbers. Proxy forms can thus sway important votes in an Annual General Meeting. In last weeks UTSU AGM, where roughly 22 out of the 26 UTM students in attendance held proxy forms, their presence amounted to over 200 votes.

In both the UTSU and the UTMSUs constitutions, Annual General Meetings are to be held in the fall session of each year so that full-time students can review their unions financial statements and vote on any amendments of the constitution or proposed bylaw changes.

As indicated in the UTSU website, U of T students could collect proxy forms in only two locations: Room 115 in UTMs Student Centre, which is manned by UTMSU office managerLinda Feener, and the UTSU St. George office. No other location was authorized. Yet in an email sent to The Medium, Feener stated that not a single UTM student had picked up proxy forms at her office. I had some here in my office in case anyone wanted one. [UTSU] sent out an email that indicated [students] could pick up one from me too, but I did not give any out.

Yet around 22 UTM students showed up at the AGM with proxy forms. It isnt clear whether the students obtained the proxy forms at the St. George office, but their student numbers would have been recorded. In their conversations with The Medium, no UTSU or UTMSU representative offered this explanation, and no student has come forth stating that they collected their forms at the St. George location.

UTSU VP internal Adnan Najmi said that signed proxy forms were  faxed to him by UTSMU staff member Dhananjai Kohli once they were collected from UTMSU.

Najmi added that Kohli was the staff member at UTMSU we were coordinating with about logistics for the AGM. It is common practice at a students’ union, and most organizations, for staff to support logistics. The UTMSU website, however, does not list Kohli as an employee, even though every other full-time and part-time employee is listed

UTMSU VP equity Vickita Bhatt admitted to urging students to collect proxy forms and to get them in on time, but when asked where she had directed students and to whom, Bhatt said, I dont know. Youll have to ask [UTMSU President] Joey Santiago.

In a phone call with The Medium, President Santiagos confirmed that Kohli supervised the proxy distribution and collection at UTM from November 16 to November 17.

Thomas Kristan, a division 3 director who sits on both the UTMSU and the UTSU Boards of Directors, said he was not given clear directions on how to collect a proxy form for the AGM, and therefore did not have any other votes besides his own. The proxy forms have been destroyed, said Najmi, arguing that they contained [students] personal information.

Najmi extended the deadline for proxy forms to students at only UTM without consultation with the UTSU Board of Directors. And although the forms were due last Monday at 5 p.m., proxy forms were only delivered to the UTM campus by a board member 30 minutes past the deadline. According to Santiago, executive director Mohammed Hashim made copies of proxy forms  sent to him and distributed some to Feeners office, and the rest to Kohli the morning of November 16. The unnumbered forms were faxed back to Najmi at UTSU by 8 p.m. on Tuesday.

Henry Ssali, UTMSU VP external and, according to the Unions constitution, the liaison between UTSU and UTMS, said that he was never contacted by the UTSU to organize logistics for the AGM. I was never communicated with on issues pertaining to the UTSU AGM. The town hall for UTMSU was on the same day and my priority is to UTM students, said Ssali.