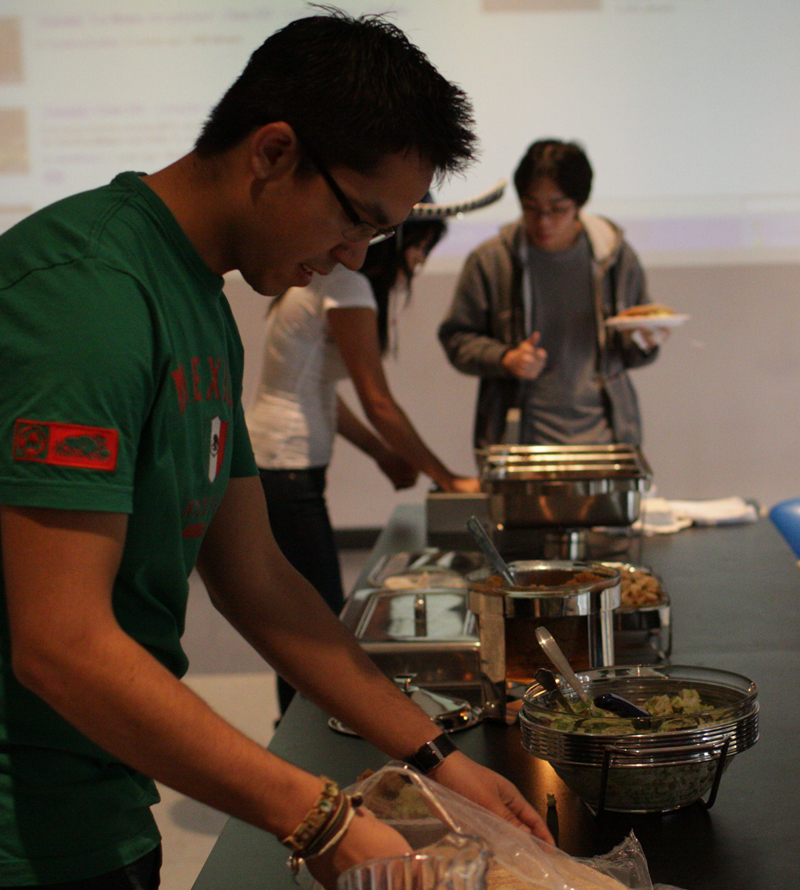 Last Wednesday and Thursday, the Organization of Latin American Students hosted Taste of Latin America. Passersby detoured into the Presentation Room at the Student Centre at the sight of sombreros, Dora the Explorer, and fajitas.

OLAS members, complete with exaggeratedly large sombreros, provided plates of rice, chicken and beef fajitas, and Caesar salad at $5 for members and $7 for non-members. Attendees indulged in the savoury feast while watching music videos on the projection screen by Shakira, Kumbia Kings, and other Latin American artists. Students took turns breaking down a Dora the Explorer piñata full of candy.

“We want to expose people to Latin American culture. It’s interesting—the food, dancing, the music, everything!” said Oscar Meza, an OLAS member. “You know, Shakira is pretty popular and Spain won the world cup, so everyone has Spanish fever. This is the largest membership the club has ever had.”

Meza, and his family made the food for the event. The Meza family runs a Mexican restaurant called Ayy Chihuahuah in Bolton, Ontario.

“The food was a big incentive for me and probably for most students,” said the UTMSU VP Internal, Gilbert Cassar. “I really admire the music and culture.”

In the past, OLAS hasn’t been particularly active. This year, they hope to hold plenty of events, develop a strong presence on campus, and host a Latin pub night near the end of the year. The club will hold a Latin event every month that will include food tasting, movie days, and dancing at salsa nightclubs.

OLAS invites all students to join in and enjoy just one aspect of the various and diverse cultures on the UTM campus.

“I love the Latin vibe and I love to dance,” said Sunil Shah, president of OLAS, after he had displayed his samba skills around the Presentation Room. “I don’t have a Latin background, so I want to emphasize that you don’t have to be Latin American to enjoy and appreciate different cultures. I think it’s important to enjoy what our campus provides and experience as many different cultures as possible.” Shah said that he first became intrigued three years ago by Latin dance and the friendly and vivacious vibe that OLAS members exude.

OLAS has also been in contact with professors from the Department of Languages. Apart from food-tasting and dancing, Shah expressed his desire to provide students with educational material and events on topics such as Latin American politics and economics.

So far, OLAS members have gone to El Rancho Nightclub in Toronto to party for Halloween and enjoy weekly salsa lessons in the Student Centre. Students interested in enrolling in salsa lessons or becoming members can check out the club’s Facebook page, OLAS @ UTM.