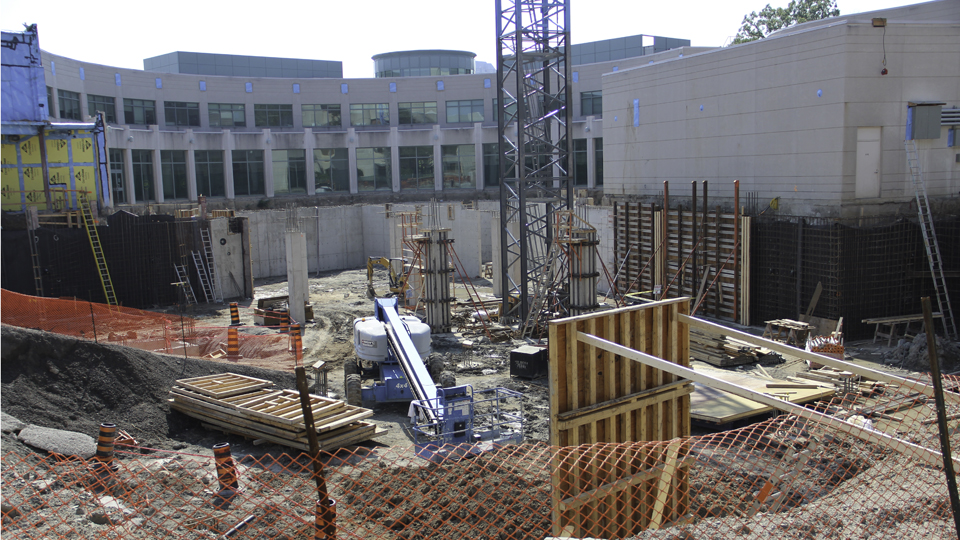 Some UTM students were shocked to return to campus last week and discover that construction was taking place on the 11-year-old Kaneff Centre, the first major academic building constructed on campus since the North Building and the William G. Davis Building, then called the South Building.

Because UTM is expecting its enrolment to swell to 15,000 students by 2017, there is an urgent need for more space. UTM has seen a 77% increase in space in the past decade in the form of classrooms, labs, offices, and residences, but even this hasn’t kept up with enrolment growth.

The new four-level Innovation Complex will be constructed as an addition to the Kaneff Centre. Expected to be completed next September, the building will host the new Institute for Management and Innovation, which currently offers undergraduate and graduate business degrees that combine management studies with projects in industries including accounting, biotechnology, and environmental sustainability. Of the nearly 13,000 UTM undergraduates, over 2,200 are enrolled in an undergraduate management program.

According to Carol Phillips of Moriyama and Teshima Architects, one of the key architects involved in the design of the new Innovation Complex, the $35-million, 6,300-square-metre complex will house the Li Koon Chun Finance Learning Centre on the lower level, as well as a variety of new instruction group study, research spaces, and classrooms—one 90-seat class and two 45-seat classes. The main floor will consist primarily of existing Kaneff teaching spaces, TA and support rooms for the Department of Economics and Management, non-assigned multipurpose presentation rooms for teaching and other campus activities, the Office of the Registrar, and other student services, as well as the Recruitment & Admissions Office. It will be fully integrated with the two-storey Kaneff Centre. Finally, an underground pedestrian tunnel will connect the Innovation Complex to the Davis Building.

The ceremonial “Rotunda” space, which will fill in the circular green of the existing Kaneff Centre, will be used for special events and social gatherings; it will consist of natural limestone at the lower level and a screen of interior wood fins at the upper level. The Rotunda is the main social space of the building, intended to serve as an everyday student lounge and a space for events. The upper levels will largely be faculty offices for the departments of economics and management, including the MMPA program.

The complex will be designed to meet the Leadership in Energy and Environmental Design Silver certification. It will include a green roof prepared for but not initially fitted with solar panels, interior glazing to harvest natural light, stone wall cladding, terrazzo floors, and an oak ceiling.

Each room in the complex will have acoustics designed for voice, whiteboards, and a location for projection ensuring maximum visibility. There will also be a small food services facility for coffee and some limited hot food options.

“The identity of the project is only partially academic,” said Phillips. “The inclusion of the Registrar and Rotunda elevate the project beyond its academic functions to one that is an architectural introduction to the campus, a social nexus, and a backdrop for everyday and ceremonial memories for a majority of students.”
Phillips said that Wi-Fi, power sources, and seating will be provided in the common spaces to “support the idea that learning occurs everywhere”.

“It is a challenge to work with an existing structure,” added Phillips. Measures have been taken to upgrade Kaneff’s routing and power requirements to the same standard as the addition’s.

UTM will pay $35 million in construction costs for the complex, but the administration expects to eventually pay between $70 and $100 million for the business school plans of which the complex is a part, including planned expansions to the facility.

In May, one week before the complex’s groundbreaking ceremony, U of T’s president, David Naylor, and UTM’s vice-president and principal, Deep Saini, went to the Mississauga city council and received a commitment of $10 million over 10 years from the city to finance the project . A KPMG study showed that the project, once completed, would have an economic impact of over $22 million per year for Mississauga.

The Innovation Complex was approved by Governing Council, the highest decision-making body at U of T, on June 14, 2012.

On May 23, 2013, UTM officials and other dignitaries arrived on campus for the groundbreaking ceremony on the Five-Minute Walk between the Davis Building and Kaneff.

A few days later, Professor Hugh Gunz was appointed inaugural director of the IMI institute and assumed his two-year position on July 1. Gunz spent eight years as chair of UTM’s Department of Management and is currently a member of Governing Council.

The Kaneff Centre opened in early 1992. It boasts the second-largest lecture hall at UTM with a capacity of 350 seats and is also the home of the Blackwood Gallery.