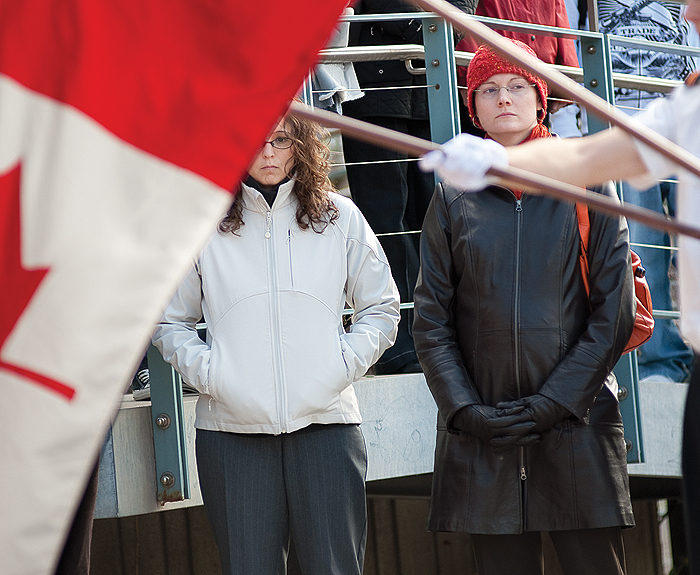 At the eleventh hour, on the eleventh day of the eleventh month, members from the UTM community gathered outside the front entrance of the South Building for the traditional Remembrance Day  ceremony.

The ceremony began with a Call to Order initiated by the Manager of Police Services, Special Constable Len Paris. Principal Ian Orchard addressed the UTM community after the call.

The significance of the event is to remember the efforts and lives of the Canadian soldiers who had fallen in the two great wars, Korea and in recent times peacekeeping missions in Afghanistan, said Principal Orchard.

UTMSU President Joey Santiago recited the Flanders Field poem in the memory of the fallen. This was followed by the Last Post and the dipping of the flag, which ECSpeRT team members and campus police staff lowered to half-mast.

Towards the last half of the ceremony, Principal Orchard and UTMSU VP University Affairs and Academics Maria Pilar Galvez laid wreaths. Students in attendance observed a two-minute moment of silence. During the course of the ceremony, the campus police stopped all traffic on campus to honor the dead. The Reveille followed the silence as the flag was raised. Paris provided the closing remarks.

Remembrance Day in Canada originally remembered the fallen in World War I and II. Over the time, it has been adopted to include the soldiers of the Korean War and Afghanistan who are striving to protect democracy and secure Canadians at home, said Constable Paris.

No veterans were present at the ceremony. Most of the Great War veterans are over the age of eight-five, said Constable Paris, and given to the weather and other considerations, they would thus find it difficult to attend.

I grew up in the United Kingdom in the years not long after World War II, said Principal Orchard. The house next door to my parents still had a bomb shelter, and my mother had a ration book, which she still keeps to this day. My father was in the Royal Air Force and met my mother in hospital during the war, where she was a nurse. For me, Remembrance Day brings back many thoughts and memories.

On how Remembrance Day is important to UTM, Orchard added, The number of students at UTM has grown over the time that I have served as vice-president and principal here, and I believe part of the reason relates to the current war that Canadians are fighting in Afghanistan. Some of those soldiers are the same ages as the students here, so our young people can relate and better understand the difficulties these soldiers are going through.

Remembrance Day is new to me, said Zainab Ahsan, a third-year international student. Growing up in Pakistan, we never celebrated any events related to the two world wars, even though I know from my Pakistan studies books that many Pakistani soldiers fought in the Great War alongside Canadian and British soldiers as part of the British Indian Army. The Remembrance Day ceremony allowed me to not only honour the lives of the Canadian soldiers but also Pakistani soldiers and those of other nationality that gave their lives in the two wars to create a better world for us.