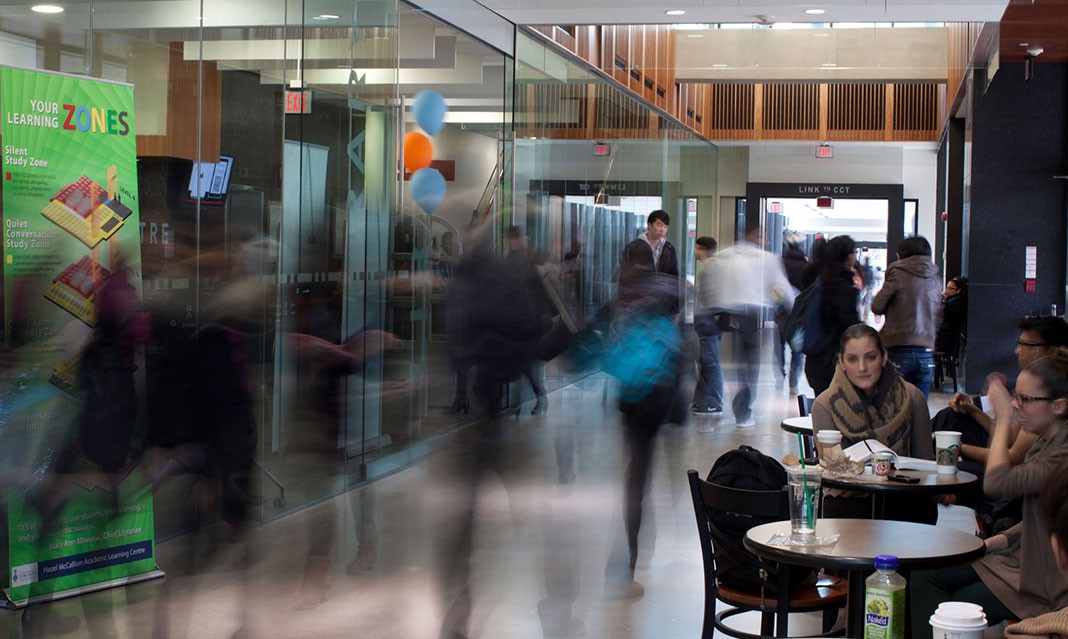 A mob floods down IB’s main steps. Students turn into classes. Students rush out of classes. They mill around the lobby—talking, texting, snacking—toting laptops, rifling through backpacks, clasping cigarettes between their teeth, dragging doors open and heading outside into the winter wonderland.

I hitch my laptop bag higher and tighten my grip on a Starbucks coffee cup. I inhale and prepare to storm up the steps to my second floor classroom, praying I won’t drop my laptop, spill my coffee, or get shoved down the steps by the mob.

It’s 12 p.m. on Monday at UTM in winter 2012, where the ratio of students to space has teetered further and further out of balance over the last five years. Compared to 2011, an extra 500 students now fill our seats, eat our food, and elbow each other for space on our buses. Compared to 2008, it’s an extra 2,000.

Some students haven’t noticed a difference in the number of bodies on campus. Others have. They complain about limited class space, limited bus space, limited study space, and super-slow food lineups. But how many students is our campus built to handle? Can any planned expansions handle another enrolment hike?

After class, I edge down the steps, riding a fresh mob to the CCT building, craving more coffee before my next class. I peer through the glass windows as I enter the building. I watch the Starbucks lineup extend beyond the edge of the counter, with waiting students leaning against the bar. I file into line and wonder whether the Tim Hortons lineup is just as long.

Chances are, it is. This year, the university installed a Tim Hortons webcam for students to check how long the line is before setting out for the Davis Building. Maybe that’s a little entertaining. Maybe it’s a possible solution to chronic overcrowding. But what if the Tim Hortons webcam is just a symptom of the problem?

When students are surveyed about food on campus, they usually launch into an angry rant about food prices or spout phrases like “There’s no variety” or “There aren’t enough healthy options”. But before all these woes can be dealt with, another overarching issue must be looked at: there’s not enough.

When considering how much food a campus needs, two questions dominate the discussion: is the campus close to an urban centre, and how many students live on campus? The answer to the first question is a definite “no”; the answer to the second is 10%. In UTM’s case, the two aspects balance out.

Bill McFadden, the director of hospitality and retail services, says food planning involves the collaboration of several other administrative units, as well as building architects. It’s also about “putting the right thing in the right place at the right time”, he says. Food choices need to be suitable for the purposes of the space. For example, a Second Cup fits better in the smaller IB lounge, whereas a Mr. Sub belongs in the larger food court of the Meeting Place.

Eric Madan, a full-time student representative on the Erindale College Council, acknowledges the complexity of accounting for the food necessities of all the bodies that pass through UTM, and also wonders if building expansions can catch up to escalating enrolment.

In a 2009/10 report, UTM Services found that food availability was disproportionate to the number of students on campus. Nevertheless, in 2010/11, enrolment increased by about 500. September 2011 marked the opening of the new Instructional Building, with its Second Cup and panini-making cafeteria.

But can new venues cater to the needs of an extra thousand students? What about the next thousand? When class ends, I drag my feet to library, hoping to catch a few hours of silent study. I dodge the slow-walkers, the talkers, and the texters, and descend into the basement. I peer over the cubicles as I walk by. Full, full, full.

I finally spot a seat on the fourth floor. I brush eraser shavings off the desk and drop into the seat. I look around again. Full, full, full.

Political science student Jericho Tan voices the concern of many students. “It’s not just the library,” he says. “There’s no space to sit anywhere.”

Madan, like many who are part of campus clubs and societies, is lucky enough to have an office in the Student Centre. But when it’s time to study, Madan dislikes the noisy atmosphere of the Student Centre. First he attempts to find a space at the library. When that fails, which it often does, Madan goes home.

However, students who have small breaks between classes do not have this option.

New study spaces have become available with the opening of IB, but again, the issue of keeping up with incoming students arises.

At the end of a semi-useful study session, I shuffle to the bus layby. It’s 5:23 p.m., and I’m ready to go home and collapse—but I can’t bear the thought of shoving, squashing, and squeezing through the mob that has now gathered at the mouth of the 110 north.

I stand outside the piles of pushing people and wonder whether I should wait for the next one.

With only 10% of our undergraduates staying on residence, the remaining 10,800 students must commute.

The UTM Residence Life staff says that unless some sort of expansion is made to their buildings, they will be accepting the same number of students for several years to come. They indicated that demand for on-campus housing usually stays at about 98%.

Aubrey Iwaniw, the environmental projects coordinator at UTM, confirms what students already know. Iwaniw, who liaisons with the Mississauga Transit office, indicated that routes 110 north and 44 north are the busiest on campus; the 110 is popular because it heads to Square One and the 44 because it runs along Mississauga Road.

Tan recites a typical day trying to get on the 110 north. “People crowd around the already very slippery road before the bus pulls in. As the bus pulls in, the bus driver honks and motions for students to back away from the curb. Students charge from all directions in no order at all.”

Tan, Madan, and fourth-year Priscilla Yuen can all cite days when they couldn’t push onto the bus. Sometimes, students who succeed find themselves standing with nothing to hold on to, or even in front of the yellow line by the front windshield.

Yuen is thankful that bus drivers have been letting people on despite the fullness. The crowd, she says, has died down since September, with only the occasional full 10 a.m. bus.

For Yuen, the crowd itself isn’t the problem. “I don’t mind waiting for the next one,” says Yuen about the 44 north, “but sometimes it takes up to 30 or 40 minutes… and it still gets full.”

Iwaniw mentioned that Mississauga Transit added some short-term routes for the busy month at the start of school. They temporarily added a short-term 110 bus that arrived every seven minutes and a 44 north bus that would shuttle back to take the students that were left behind.

Yuen, however, insisted that she saw no extra buses. “I am pretty confident that Mississauga Transit did not add any extra buses,” she said. “Actually, the schedule has been the same since September 2010—I have a picture of the bus schedule from then that I still use now.”

The large crowds have incited one permanent change in this year’s 110 north schedule. Since December 12, the bus began arriving every seven minutes, hopefully easing some of the swarms.

Alana Tyers, a Mississauga Transit planner, holds that, despite the expected increase in coming years, Mississauga Transit has no plans of making additional changes to these routes. “Should incidents of overcrowding or any other related service issue occur,” she added, “we will make whatever changes necessary at the time.”

Bus ridership saw a massive surge when UTSMU lobbied for the U-Pass several years ago, but no more surveys have been taken since then to find out how many students take the bus instead of driving to and from school.

For students in 2012, the trouble is almost over, especially with the addition of the new 110 north route. For next year’s froshies and remaining undergraduates, things might get tough, unless the MiWay officials change their plans. Next year, campus administration foresees an enrolment dip for the first time since 2001. But numbers will hike up again to an extra 400 students in 2013/14.

Campus capacity is one of the many affairs tended by the ECC. The ECC and student leaders “meet before every formal ECC meeting and collaborate together on issues like these and try to come up with effective ways to address them at formal meetings,” says Madan. At formal meetings, however, staff and students sometimes clash.

Still, there is hope. In response to student surveys, the UTM library announced the creation of new silent study space on the first (basement) level. The expansion, which will begin in May, comes at the cost of relocating older serials that no longer see much use.

Planned renovations to both the North and Davis Buildings will also aim to create more space for studying and dining. This summer, parts of the aged, stony, high school-like North Building will come down. The new structure will grow by about two thirds of the current size and will include a new lounge-style dining area.

McFadden says the new dining area will introduce a more comprehensive, multi-counter, combined-cash setup, much like that in the Instructional Building. The new system means fewer lineups and faster purchasing.

The ever-popular Tim Hortons in Davis will also receive a makeover this summer. With a longer counter, grabbing your iced capps and double-doubles could take half the time. Along with the Timmy’s, the rest of the Davis Building dining area will also undergo a radical transformation.

Both buildings’ dining area designs include seating for different purposes: seats suited for eating, softer seats for studying, and in-betweens.

“We want to put in spaces that allow people to study and be productive with their time,” explains McFadden, “like, for example, when they’re waiting for the bus.”

Plans for similar changes at the Colman Commons dining hall (in Oscar Peterson Hall) are also in motion. Again, a more comfortable design aims to attract non-residence students to that area of the campus.

UTM administration has planned with up to 15,000 students in mind, a peg we’re set to hit sometime after 2017. By then, speculations about new buildings might become realities, bringing with them an urgency for more food space, more study space, and more transit space.

Madan notes what he sees as the most important issue. “It’s always a question of ratio,” he says. “The main question has to be whether the projects are proportionate to the inflow of students.”

Looking at our campus right now, students see a crowded space, one that grown radically—even over the span of one graduating class’s term at UTM. Graduates of the coming years should take a long look at the young campus. Ten years from now, UTM might be unrecognizable.