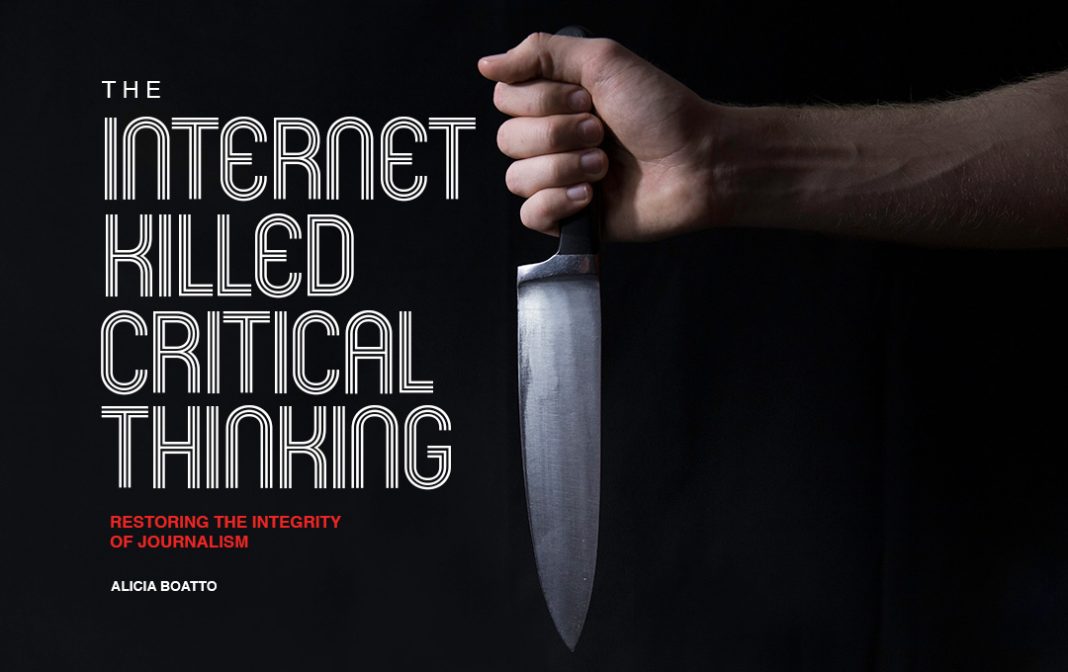 Technology has ushered us into a new age—one filled with an abundance of information available at a moment’s notice to billions of people across the world. With the rise of social media and portable devices, sharing information has never been easier and more dangerous.

Sources of information, specifically news outlets, are scrutinized. Reporters have been accused of bias, causing the reliability of news media decreasing sharply. Audiences have been chanting the mantra of “fake news” to discredit information they simply don’t like. With so many outlets of data, both fake and official, people have lost the ability to discern fact from fiction in order to preserve their own ideologies. It doesn’t take a genius to look at current events and realize that information is being catered to two extreme spectrums. It seems that people don’t want to stay aware of the world around them, they only seem concerned with being right over people of a different mindset. The quest for facts has been lost in the attempt to push agendas, and with it, the credibility of modern journalism.

The degradation of the free press is exactly why I’m adamant that journalism still matters, and in fact, has never been more important. As a hopeful journalist graduating from the University of Toronto, the ignorance of so many when it comes to journalism never fails to give me cause for concern. Journalists are not the enemy; we are here to give undiluted facts and knowledge to audiences so that they may arrive at their own independent conclusions and decide their own course of action. It is the responsibility of journalists and reporters to function as the carriers of information. We are the bridge for every citizen to have access to accurate information regarding politics and world affairs.

Reporters cannot afford to lose the faith of their readers. Otherwise, we run the risk of alienating audiences to less reliable means of information. Our purpose is to provide information, not to influence outcomes. Reporters, especially TV anchors that have let their bias blatantly show on national television, influencing the network’s affiliations are detracting from the actual issues. It is my belief that if a reporter becomes the news instead of stating it, then they have lost sight of what their job entails. Individuals like Glenn Thrush, Megyn Kelly, and Anderson Cooper have succeeded in gaining viewers for their networks, but in the process, have failed in their jobs as reporters. We have lost our neutrality in the quest to gain views, and that loss of middle ground has damaged the industry of news reporting.

Good journalism is still vital for today’s society; one where finding the right information can be overwhelming and confusing. Our age of technology has changed the way we access and read the news. Long gone are the days where newspapers were circulated weekly and awaited eagerly by readers.

We now live in a world where dozens of stories are being published in an hour, let alone a single day or week. With all this information, it’s easy to just sit back and absorb the myriad of statistics thrown at us, instead of differentiating between fact and bias and different forms of articles. Social media is filled with online critics and supposed-experts in journalism remarking that “This isn’t news,” “This is biased”, “Fake news,” without even understanding the different forms of reporting. As news outlets, as well as readers, it’s important to make clear the different forms of articles, whether that means understanding the difference between a news article, an opinion piece, or the entertainment section of the paper. I find it troublesome when I see Facebook users claiming “poor journalism” on articles, when they are in fact reading editorial and opinion pieces. When audiences are unable to differentiate between a news article and opinion piece is when journalism is needed most in order to inform and to educate.

The trend of crying “fake news” and dismissing vital news stories is furthering the importance of good journalism. We need readers to be able to critically assess stories, observe the facts objectively, and then form their own opinions. Many people, including my classmates and peers, are content with either turning a blind eye to current events or isolating themselves to a single source of information. As readers, it is our responsibility to cross-check the stories we’re being told, to take initiative and figure out our own stance within a story, to ask questions about what’s missing in the story, and maybe question how the details have been portrayed. A lot of this misinformation comes from the way social media filters our information. Platforms like Facebook and Twitter have given users the opportunity to select and personalize news sources and topics that they want to see. If we limit ourselves to selective outlets of information that only present one-sided arguments, can we really learn and think critically about current issues?

While at U of T and minoring in the professional writing program, one course I have taken in particular really highlighted tendencies of modern audiences. The course was focused on blog management, and one of the lessons the professor taught us was to tailor our posts for “scanability.” People today aren’t actually interested in fully reading articles. People today just want the gist of an article on one glance and then move on. This tendency is what has propelled companies like Buzzfeed, whose posts are condensing largely into lists and small blurbs, into popularity. The trend of scanning articles results in writers reducing their content at the risk of excluding pertinent information. Quality journalism is important because it reminds readers to read actively, especially in a society where people are too busy to stay aware. Organizations like Buzzfeed, Narcity, and Vox, which limit stories for convenience, have begun making that style of scanability the norm for news media. Essentially, lazy journalism has created lazy readers. Quality journalism needs to take back the world of news media and restore integrity and professionalism to the industry in order to create well-informed readers. However, it is also the consumer’s responsibility to be aware of where their news is coming from, to take the initiative to look into sources of information, and be proactive about asking questions.

When I tell people that I want to get into the journalism industry, I’m usually told about the shrinking newsroom and the low demand for reporters. But I’ve learned a lot working for this student paper, especially regarding the role of reporters and journalists. One thing this role has taught me, more than anything, is that the need for quality and unbiased reporting is more desperate than ever, regardless of the shrinking newsroom. The boom in technology and social media has blinded reporters from their main objective of reporting corroborated facts, causing us to lose our notoriety and authenticity. It is that objective of solid reporting that I hope to fulfill after my graduation and encourage my more experienced cohorts to remember.