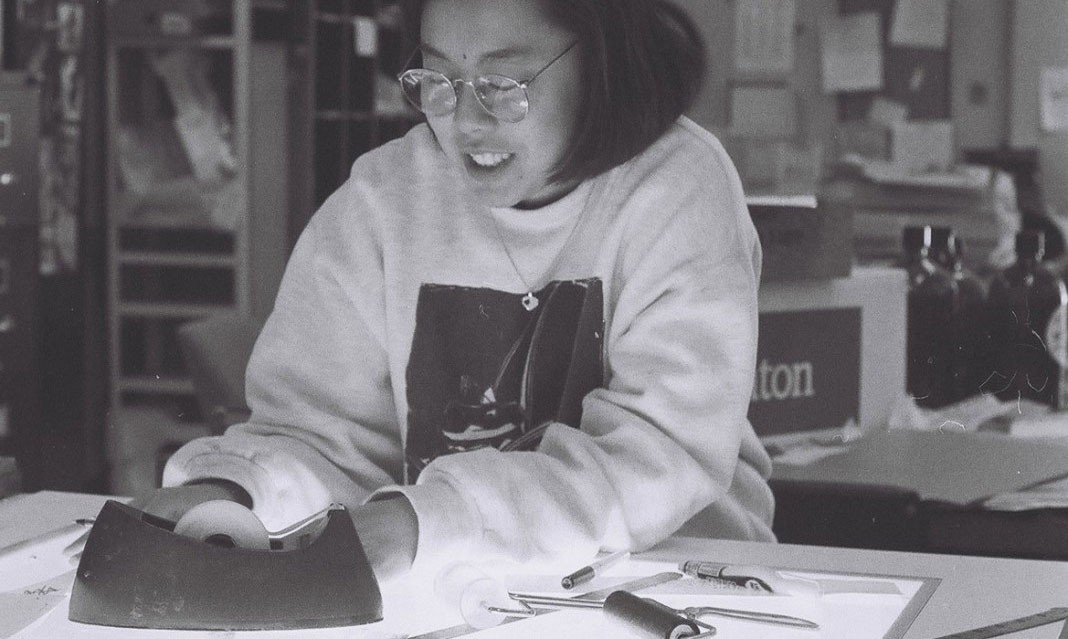 Every Monday morning, a stack of fresh newspapers appears on stands around campus. But how does it get there? It takes people, planning, programs, papers, and printers—not to mention hours of research and editing. When we think back to when the Medium was first born in the 1970s, it’s hard to imagine how all that happened without shiny iMacs, swanky software, and automated machines.

TYPESETTING IN THE ’70S

It’s the decade of Farah Fawcett fluffy hair, big bell bottoms, and Pink Floyd. At UTM, or rather Erindale College, the doors of the South Building open into its brick-lined hallways for the very first time. Medium II, as it’s called, also turns up on campus with headlines like “Woman to be nominated for mayor” and “Erindale quest for basketball team continues”.

It’s hard to imagine the Medium office—or any other campus office, for that matter—without a few sleek monitors. But let’s try. Instead, the newspaper staff had bulky, metallic equipment like typesetters and waxers.

The editors trickle into a campus office over the weekend. Each editor assembles one section of the newspaper. The editor procures a large, sticky, blue-lined, cardboard-like piece of paper about the size of the final newspaper page it’ll produce. In some years these papers or “flats” were stuck on the office walls for safe-keeping. The blue lines form a template; they mark where the headlines, body text, photos, captions, and ads will fit.

The editor starts with the articles already typed up and printed. (The process differs from year to year.) Depending on the generation, the editor takes either full 8.5×11” papers or smaller strips to a metal machine called a waxer.

Now, the editor looks over his pages. Are there any grammatical errors or unsatisfactory sentences? He makes corrections with a special blue pen.

When all the “its” and “it’s”, “you’res” and “yours” and “weres” and “we’res” are found and fixed, the flats are finished. One of the editors volunteers to physically drive the boxed-up flats to the printing house.

PRINTING IN THE ’70S

Medium II (later renamed the Medium) has worked with many printing houses over the years. The specifics of how the software and machinery worked differed from printer to printer, but here’s what a typical set-up looked like.

The flats are now in the hands of the printer. Pre-press production starts. People and programs review the pages. Textboxes are aligned, edges sharpened, and colours corrected.

In a technique called “photo offset”, chemicals are poured on the flats, exposing them to a precise amount of light. The hardcopy is transferred to film that is then stripped into “film flats”, which will finally be imaged onto aluminum plates hung on the press. The images are transferred from plate to paper via cylinders and rollers: some rollers pour water, others pour ink, others absorb the liquid, and still others distribute it. The last roller brings the ink to a rubber cylinder. The rubber cylinder presses onto the paper, releasing a water-based fountain solution that covers the areas that will be whitespace. The solution repels the ink that flows over the page.

The pages roll out from the press. They stand a few minutes while the ink cures.

If you’ve ever wondered why you get ink on your hands when you read a newspaper, here’s why. Because of the breakneck pace of newspaper publishing, printers opt for a quicker-drying ink in a process called “cold web printing”. This process isn’t as precise and permanent as the kind you get in magazines or books. When you think about the purpose of a newspaper—to be read fast and discarded fast—the ephemeral nature of the medium (thin paper, smudgy ink) make sense.

Today, the typesetting and printing processes are a little different. No flats. No waxers. No sticking. No driving. All the layout is done on iMacs with desktop publishing software. Editors drag and drop textboxes into a computer template instead of physically sticking them onto a piece of cardboard. Editors digitally drag and drop files onto the printer’s server instead of driving pages over. The process in the office is quicker, crisper, and cleaner. At the printer, though, the process is still pretty much the same—except now, the printer picks up files, not flats.

If you’ve made it this far, you probably have questions. You’re wondering: Why do these processes matter? And why do student newspapers still print anyway?

It would be a lot faster—not to mention cheaper—to cut out all the above. Upload some articles online. The information is what constitutes a journalistic publication, not the medium. Right?

To answer those questions, we need to step back a little. Today’s newspapers, magazines, and book publishers are still trying to figure out where they fit in now that the Internet has uprooted much of the culture that formed their foundation. The best answer, at least for the moment? People are still reading print.

A few studies have shown that people still prefer paper when reading texts longer than 400 words. This encourages a trend that many publications have been gearing towards in the last few years: longer, more in-depth pieces appear in print issuesl like magazines and weekend papers, whereas short, hard news is what quickly flies down their screens.

What does that mean for student newspapers? For now, the Medium will continue to print. But will it look exactly the same in a few years? Probably not. All that can be said for certain is that news—whether it’s broken through tweets, Facebook posts, pint-sized paragraphs on the website, or lengthy print investigations—will outlive any particular medium.