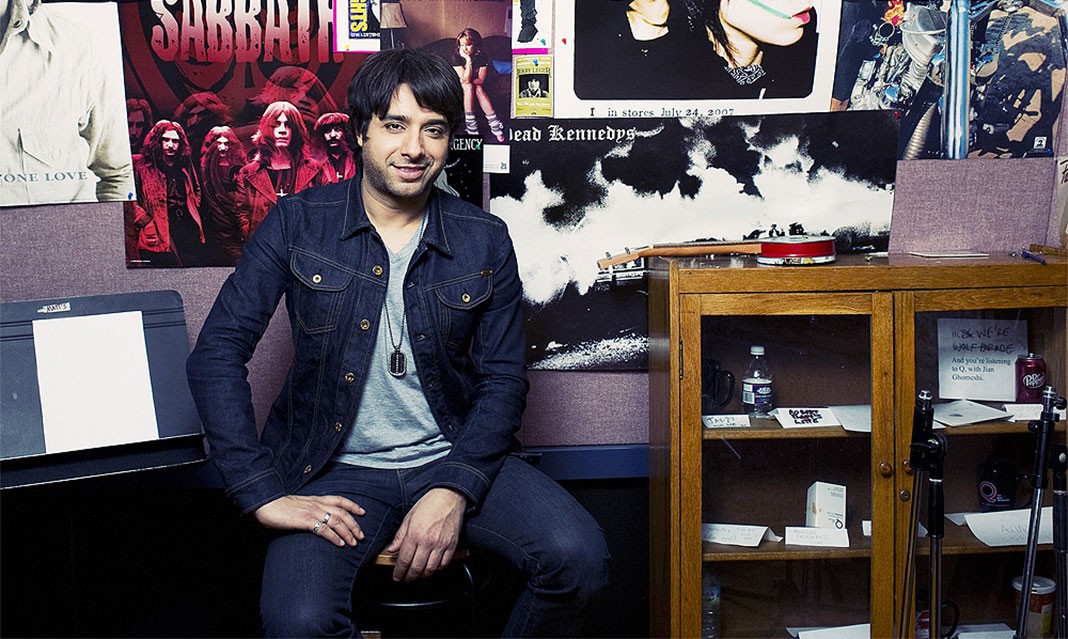 An award winning broadcaster, the host and co-creator of the national daily talk program, Q, on CBC Radio One, Jian also manages the career of Canadian singer/songwriter Lights through his production company Wonderboy Entertainment.

At the CBC building in downtown Toronto, Ghomeshi dishes about his years as a confused undergrad student at York University, learning how to be comfortable in his own skin, and who his biggest critic is.

The Medium: You’re an artist, musician, writer, producer, and manager—what keeps you so driven to do so many different things?

Jian Ghomeshi: It’s a good question. I feel like I have this unbounded interested in a lot of things. I would say, in terms of my own self-identity, my best quality is that I have this wide variety of interests in things that I want to do. So when I’m interviewing someone or involved with a project, I’m genuinely interested, I’m genuinely throwing myself into it—the downside is, I feel like I’m counting down the years. There’s already things that I can no longer do,[ like play in the NHL], so when I think of the list of things that I want to do, there’s a bunch of stuff I’m really interested in. Honestly, I think part of my ambitions is fuelled by the love of wanting to be involved with something. So, for example, with Lights, that comes from a genuine passion and belief in her over the years, and wanting to work with her and develop her and see her dreams through as her manager. And that’s true for any project I’m involved in.

TM: Was there ever a time when you thought this career and industry weren’t for you?

JG: There’s a lot of times I’ve felt that in the most pronounced way. I lamented in the past; particularly when I was in university, I was really worried and kind of overcome by the fact that I had a variety of interests and I kept thinking that if I only focussed on one, I’d be particularly good at it—you know, as if I’m some sort of jack of various trades and master of nothing. I was really into singing and music, and I felt like if I just focussed on that I could be Bowie; and I was really into political science and history and studying the Middle East, and if I just focussed on that I could be Edward Said. The irony of all that is, despite the fact that I lamented these various interests, it’s that very “Renaissance Man” nature of me that’s led me to be able to do what I’m doing. I use my political science major and women studies minor every day, my experience as an artist brings empathy into my interviews with other artists, and for all those years on the road, I use my experience as an activist. The very concern I had with my diversity of interests has actually turned out to be a boon for me. And when I speak to campuses and students, I say “Don’t be afraid of having a variety of interests”, because people get freaked out and think they have to focus on one.

TM: After speaking to so many campus groups, many of which were during Frosh Week, is there anything you wish you could go back and tell your first-year self?

JG: I’d say, “Hey, pal, try and be more confident. Try not to worry so much about what sets you apart, because that could actually be an asset.” I feel like between being a first-generation immigrant and the kind of stuff I was involved in, my struggle through my teenage years was worrying and feeling like I didn’t fit in. I focussed on that a lot, and wanting to fit in somehow and have people like me always clashed with the fact that I’m somebody who has a lot of strong opinions and I’m someone who wants to create change and I want to act on things I believe in. And those things don’t necessarily go hand in hand, advocating and being loved by everybody. The most important thing I could do for younger Jian is give some assurance that it’s okay. I really love the “It Gets Better” campaign, because what it’s really saying is “trust who you are”—and as time moves on, and the older you get, the more experience you get, you realize it’s okay to be you. And it’s true and it’s been really important for me. One of the tricks of a broadcaster, for example, is to impart this sense of comfort, being comfortable in your own skin on the air. I used to say that was the key to broadcasting, but it’s almost the key to life. You tend to like people more who are open and comfortable with themselves and not putting on a façade. TM: You have a great way of making people feel really comfortable on air. Some of your guests show sides of themselves that we never really see in their “celebrity” identity. Howie Mandel, for example, was very candid about his struggle with mental health issues, and he’s usually seen as a funny man who can’t be serious. Has there ever been a time where an interview completely changed your opinion of the guest—for better or worse?

JG: All the time. Thank you for saying what you said. The idea that I can create a sense of community and put them at ease and get somewhere with them is something I really try for. I think part of it is really investing in the person I’m interviewing, both by doing the research and demonstrating to them that I actually care about this. When you invest in the interview as the interviewer, the interviewee can sniff that on you, and they’ll relax and tell you things that they might not tell someone who’s more passive about what they’re doing. But it’s happened many times: I’ve gone into interviews thinking “This will go okay” and end up being blown away. Jennifer Love-Hewitt comes to mind. I remember interviewing her, thinking, “She’ll probably be bubbly and sweet—best-case scenario, she’s a nice person.” I remember my producers at the time saying “Don’t go too hard on her.” She was probably expecting some superficial questions, but at the interview she turned out to be incredibly genuine and self-aware and connected to who she is and what people think of her, not delusional about her own abilities. She was just an all-around sweet person, very interesting, and I walked away really impressed with her.

The flipside of that is interviewing Chris Rock, who’s one of my heroes, and I had a very disappointing interview. He didn’t invest and engage and I was asking questions of a political nature based on his documentary (that he would be interested in), and he had absolutely no interest in going there and he wasn’t funny; it was just all-around kind of disappointing, which is most depleting not only in the sense that I didn’t get a great interview but he’s also one of my idols and now I have to think of him like that forever.

TM: What are the biggest misconceptions that people have about you?

JG: One of the things that’s always been a misconception about me, because of the way I carry myself and because I’ve got opinions that I’m not afraid to share, is that I’m super-confident and you could say anything to me and about me and it won’t bother me. It’s not only untrue, it’s the opposite of the truth—ultimately, I’m an artist, and the same thing that fuels me to write and play music or perform is the same kind of vulnerability or insecurity that makes me concerned about what people think or respond when they get something wrong. Inevitably, there are always people who misunderstand what I say, or if I’m being sarcastic they think I’m being serious. I’m a serious guy but I joke around a lot; I like satire, I like sarcasm, I like humour, and if there’s ever a misunderstanding about what I’m saying on air or on Twitter and people are taking it as some very serious commentary…

Other than that, people also have misconceptions about how easy it might be to do a show like this. I sometimes have people ask me what I do for the rest of the day, as if I just turn up and freestyle when I go on air. Boy, do I wish that was the case! I haven’t figured out a way to do what I do without doing research and working with my team, so I think—and I don’t mean this in any woe-is-me way, but realistically—people sometimes don’t know what it takes to put the program on air.

TM: There’s a lot of people who I hear saying how much what you do means to them. How much is that a part of your reason for doing what you do?

JG: The best thing anyone can say is that they feel connected to me, or the country, by listening to the show. That’s such an honour; it’s such a wildly flattering thing to hear. I’m not someone who spends a lot of time reflecting and thinking on what I’ve done. In fact, I focus on the things I do wrong—that’s another thing people don’t know about me—so the show ends and the most critical person is me, I pick it apart. If I screw up I’m very hard on myself, and it’s amplified by the fact that I always screw up on air in little ways; I’ll stutter or say something I wish I’d said differently. But when I do have a moment to reflect that I co-created something here and it’s sort of based on my personality and interests, that is resonating and that has worked, I can’t believe it—I think it’s incredible! What a generous gift for people to want to tune in and listen to things I’m interested in and conversations that I’m passionate about. I’m sure a lot of it has to do with the guests we have and the team we have, but to be at the centre of that is such an honour.