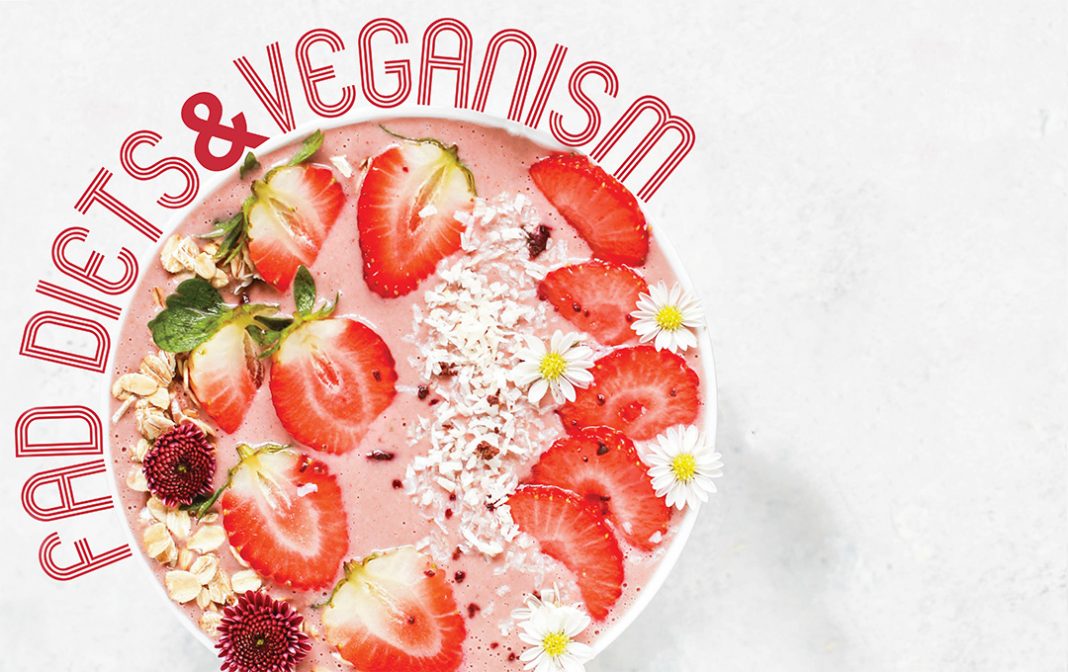 When individuals, especially women, look at Instagram models, such as Kayla Itsines, Diana and Felicia of basebodybabes, or Jen Selter, it is easy to get captivated by the way they look. With their washboard abs, it is natural to have a desire towards wanting that for yourself. I, too, am guilty of following such accounts in the hopes of one day looking as perfectly sculpted as they do. Even other non-fitness models like Kendall Jenner, Hailey Baldwin, or Gigi Hadid, have a naturally thin frame, and for many women who do not look like them, having their type of body is unattainable. Seeing these models on different social media accounts, predominantly Instagram, can be a reason as to why people turn to fad diets. Essentially, a fad diet is a diet that promises large weight loss results in a short period of time, and is usually attained through an unhealthy and unbalanced diet. However, some diets, although classified as “diets,” are not fad diets and more of a lifestyle change or preference.

Juliana Cavaleri, a Ryerson University graduate with a Bachelor of Science in Nutrition and Food, sat down with me to discuss various diets to help decipher the true definition of a fad diet, as well as its possible effects on both the body and mind. One of the largest problems associated with fad diets is weight sustainability. Cavaleri explains that, “A lot of people, when they’re trying to lose weight, they’ll keep it off for a bit but it’s not sustainable. And then they revert backwards and gain even more weight than what they lost before.” This constant battle of back-and-forth weight loss and gain is detrimental to not only a person’s physical health, but also emotional wellbeing. It is very discouraging to see yourself put on more weight than you had previously lost. However, it is natural to feel “desperate” to lose weight when comparing yourself to Instagram models. Trying out different fad diets like the egg fast diet, different liquid cleanses, or the raw food diet is all too common amongst people desperate to shed a few pounds.

While she does agree that there are diets out there that work well with certain people and their lifestyles, the overall key is finding a balance. Cavaleri is a huge advocate for finding your own rhythm and balance that works best with your lifestyle. For example, veganism to a meat lover seems unrealistic, but to someone who has problems digesting meat or does not enjoy eating it, a vegan lifestyle becomes more desirable.

Social media can sometimes influence our decision to turn to a fad diet. In an interview between American stand-up comedian, colour commentator for UFC, and podcast host Joe Rogan, and American journalist, author, and filmmaker Sebastian Junger, the two discuss the implications that social media can have on one’s identity. Junger explains that risk of suicide and Facebook are said to be correlated with one another. He referred to something he read and said, “In other words, people that are on Facebook and social media […] are at an increased risk of depression and thoughts of suicide.” This can also be relevant from a diet standpoint. Individuals can feel a sense of depression over the way they look. In an article by Josée L. Jarry, Amy Kossert, and Karen Ip of the National Eating Disorder Information Centre, the authors wrote, “Body-image dissatisfaction and over-reliance on appearance as a source of self-esteem, impair the quality of life of most women, and are key diagnostic criteria for eating disorders.” Overall self-esteem and confidence often stems from how we perceive ourselves.

It is no surprise that diets such as veganism, vegetarianism, and the ketogenic diet are gaining popularity, which can be hugely attributed to the growth of various social media outlets. Instagram especially has a wide array of vegan food accounts—such as vegan, veganbowls, and vegancommunity—that have given people a sense of belonging to an online community. They paint veganism as a wildly cool, natural, and healthy diet, and they have gained millions of supporters and people transitioning into a fully plant-based diet. While veganism, vegetarianism, and ketogenic are diets, Cavaleri does not believe them to be fad diets, but instead, more of a lifestyle. People who choose to follow one of these diets drastically change their eating habits and usually do it for life. Living a vegan or vegetarian lifestyle are popular diets simply because it’s cruelty-free eating, it’s environmentally friendly, and for some, it portrays a sense of “coolness.”

This raises the question—are people opting for a vegan lifestyle simply because they care about the animals and what they are putting into their bodies? Or is it more to feel a sense of community online? How does being a vegan or vegetarian affect the way people view you? Cavaleri does mention that eating animal-based products can be very taxing on the digestive system. She states that when our bodies produce phlegm or gas, that is a way of our bodies telling us it is “poison” and that we don’t like it. “So, I think how you’re feeling by not eating animal-based products is another incentive for people to not want to eat animal-based products anymore,” says Cavaleri. She also explains that many vegans often incorporate yoga into their lifestyle. The combination of both a plant-based diet and yoga is said to be a holistic lifestyle because it targets both the mind and body. While veganism is believed to be better for the environment, it is also known to be much costlier—not only in terms of food, but also clothing, and even household cleaning products.

An ongoing stereotype about vegans is that those who carry out this lifestyle feel the need to vocalize it. This belief entails that people become vegan because it is the “cool” thing to do. The motives of people following a vegan diet always seem to have an underlying fogginess to it—you never quite know if they are following it solely because of their beliefs or to feel a sense of community via social media. People who do follow veganism are assumed to be setting up this image that they live a holistic and healthy life that is cruelty-free and better for the environment. If the sole reason for becoming a vegan or vegetarian is for the image, then that automatically takes away from the noble and righteous lifestyle that many vegans follow.

One problem that can arise from a vegan or vegetarian diet is the intake of too many carbohydrates. Cavaleri says, “Really learning how to balance yourself and not just eating carbs all the time is imperative.” When a food item has the word “vegan” in front of it, it does not mean that it is automatically healthier for you. Vegan pasta, lasagna, or pizza still have a substantial amount of carbs in them, which could lead to weight gain.

This brings us to the ketogenic diet, which is a low carb, high fat, and high protein diet. Most people on this diet will get their fat and protein intake through meat. Thinking back to our ancestry, Cavaleri explains how we used to be hunters and gatherers, which led to having high protein diets. Keto is based on our diet as cavemen, where our bodies used fat as fuel instead of carbohydrates. “When you keep eating carbohydrates, your body is in glucogenesis. You are always producing new glycogen and glucose but then if you eat too much of it, it’s just storing it as fat now,” Cavaleri says. Many would agree that most delicious foods are carb-filled, like pasta, pizza, bread, cake, muffins… need I go on? However, as much as we love to indulge in these delicious foods, they are also the reason for weight gain and fatigue.

The ketogenic diet is not as popular throughout social media like vegan or vegetarian diets are. Of course, there are many people who have adopted the keto lifestyle, but it does not have the same attractive reputation that vegan and vegetarian lifestyles have. The lack of fame associated with the keto diet may be because it relies heavily on the intake of protein. This protein usually comes from an abundance of meat which is the complete opposite of a vegan or vegetarian lifestyle. Although the overall effects on one’s health may seem better on a ketogenic diet, it still doesn’t quite have that “vegan class.”
While at work, Cavaleri admits that she deals with many patients who are interested in starting a fad diet, like the military diet or a juice cleanse. What she opts to do is teach patients portion control. Instead of telling someone “No, you can’t eat that,” it is better to educate and slowly try to eliminate their problem foods. Cavaleri also states that after they have children, women are most likely the ones wanting to start a fad diet. “It can range between late 30s to 50s when menopause starts,” says Cavaleri. “Weight management is all about hormones and hormones can really affect the way someone is eating, sleeping, and all those things.” She adds that people interested in starting a fad diet almost always fail and end up putting all the weight back on, if not more. Fad diets work as a vicious cyclic decline that Cavaleri explains: “After they see me, they’re motivated to take on the changes. And then a week passes and then two weeks pass, and life happens. They’re upset, there’s emotional stressors, then they eat again and then they lose the momentum. So, it’s very common that something triggers them to revert backwards.” Cavaleri also explains that another big problem associated with fad diets is the reverse psychology effect. “When you say you can’t have carbs anymore, some people are more inclined to eat more carbs,” says Cavaleri. Therefore, this can allow binge eating to occur because people get upset with themselves for not sticking to their respected diet.

The Atkin’s diet and South Beach diet are among the most popular fad diets that Cavaleri gets asked about. The basic premise of the Atkin’s diet is low carb and unlimited fat and protein. The South Beach diet has three phases that aim to replace the “bad” carbs with the “good” carbs and “bad” fats with the “good” fats. “With the South Beach and Atkin’s, those weren’t really doctor encouraged,” Cavaleri says. “The difference with these diets and the ketogenic diet is that [keto is] doctor supported.” Veganism is not supported by doctors, but instead, more of an internal belief system that people have for reasons that have to do with animal cruelty, digestive, and many more.

Cavaleri explains that it is all about portion control. A person can diet all they want, but some people need a serving of fruit or a plate of pasta to keep them on track. When it comes to a person’s diet or lifestyle, it is all about finding a balance. Whether the goal is to lose weight, have more energy, or live a life you feel is morally grounded, finding a nice contrast between eating a regular balanced meal paired with those moments of indulging is key. This is why being fixated on achieving the ultimate body image can be damaging to one’s health. While it can act as a positive motivator, it can also lead to negative emotions if the results are not what you were expecting. Just like with a person’s diet, finding the perfect balance between health and acceptance is just as important for anyone.