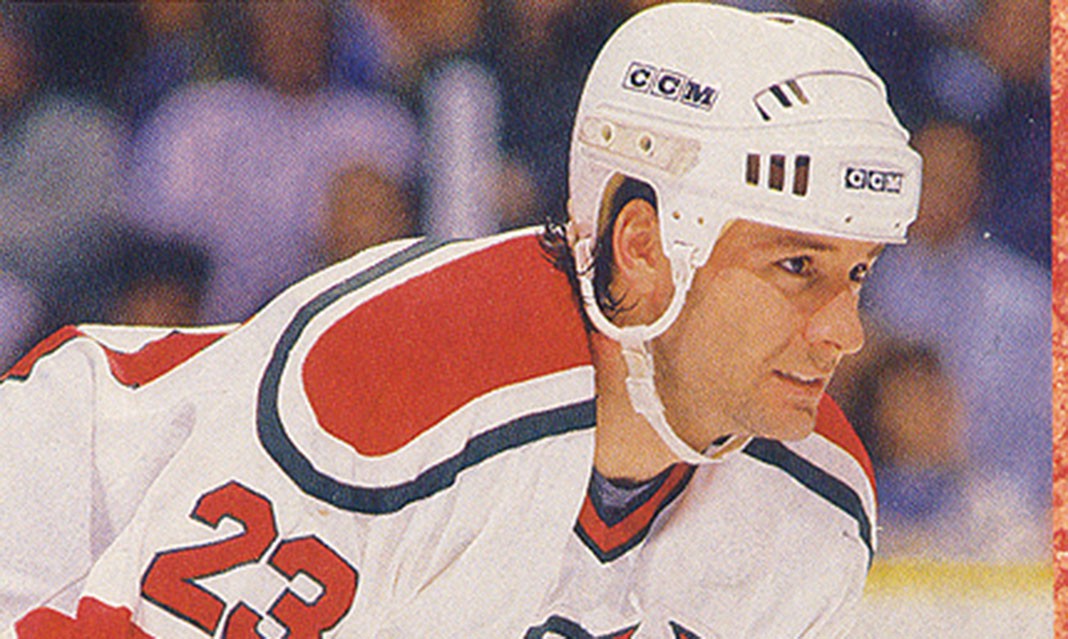 Born in Toronto, Ontario, Driver played junior hockey for the Royal York Rangers before he was recruited to the University of Wisconsin, where the Colorado Rockies promptly drafted him. He got his first taste of NHL action in the 1983-84 season after the Rockies relocated to New Jersey. At just 21, he represented his country at the 1984 Olympics in Sarajevo, where Canada finished just short of a Bronze medal.

During his 15-year career, Driver gained a reputation as a strong defenceman with a great point-shot and poke-check. His leadership skills were so strong that he was given the Captaincy of the Devils in 1991, then Assistant Captain in 1992, under Scott Stevens.

During the 1994 playoffs, Driver played 17 games and scored seven points. The Devils swept the Red Wings to capture the Stanley Cup. Following that season, Driver signed with rivals New York Rangers as a free agent. He played three seasons and retired in 1998 after a 15-year career.

What was your most memorable goal?

I would have to say the goal that I scored in game three of the 1995 Stanley Cup final was probably my biggest. We had a two games to none lead in the series against the Detroit Red Wings and to win game three would put us in a tremendous position. My goal was one of five straight that we scored to take total control of the game and series. In all honesty though, it was probably the passes that I made to teammate Sean Chambers for his two goals in the Cup winning game that stick more in my mind. They were huge goals that helped us win game four and sweep the Red Wings.

As an ex-NHLer, what is your opinion on headshots and fighting in the game today?

The headshots need to be penalized to the fullest extent to help control the number of concussion injuries that we are seeing today. Players are bigger, stronger and faster then ever before. There needs to be more responsibility placed on each player to give more respect to the opponent. It’s one thing to hit a player legally when they have their head down but it’s another to go looking to intentionally injure a player who is in a vulnerable position.

What was it like to play with future Hall of Famer Martin Brodeur? what was he like off-ice?

When I had the pleasure of playing with Martin Brodeur, he was very young. He was extremely poised for a young goaltender and you could see that he played very calmly for one. He never let a mistake a teammate made or a bad goal he gave up change his focus. He worked extremely hard in practice, which made him very tough to beat in games. Off the ice, Martin is very approachable. He is always willing to take time to speak to young kids and give them encouragement.

What was it like to be on the ice and skate around with the Stanley Cup?

Winning the Stanley Cup was like a dream come true. As a young boy growing up in Toronto, I can vividly remember pretending to play in the Stanley Cup Finals. Whether it was playing street hockey or fooling around on the man-made outdoor rinks in winter, I was always thinking about one day playing in the NHL and winning the Cup.

How did your family feel about you being on the road all the time?

It took time for my wife to get adjusted to our travel, but she was always very supportive and quickly understood the amount of work that goes into being a professional athlete. My children were young and often didn’t really understand why daddy was traveling a lot, but after 15 years and winning the Stanley Cup, I think even they began to understand how important that was to me.

Who was your favourite team to play against? Why?

I think my favorite team to play against was the New York Rangers. They are the closest team in proximity to the New Jersey Devils and the rivalry has always been real intense. A few playoff match-ups will do that! I’d say my second favorite team to play was the Toronto Maple Leafs because it was my hometown and I knew there would be lots of family and friends attending those games at the old Maple Leaf Gardens.

Why did you sign with your rival team over the Devils?

My decision to sign with the Rangers was strictly a family move. I wanted a no-trade clause in my contract to stay with the Devils and they told me that they wouldn’t be able to accommodate me. I wanted some control over my own destiny and a no-trade clause would do that. As a group, our defensive core was beginning to age and the Devils had a lot of good young talent that needed to start playing. I felt that since I was the oldest defenseman on the team at the time that I may be the first to be traded to make room for the young guys.

What do you think you would be doing if you didn’t make it to the NHL?

Had I not made it to the NHL, I was working in college toward a degree in physical education with the desire to become a physical therapist. I enjoyed learning about how the body can heal itself with the help of doctors and therapists.