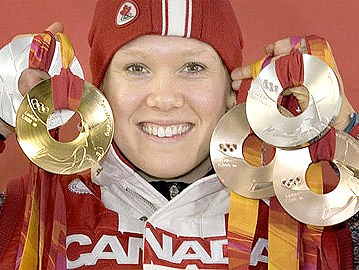 Andrew swears he based his list “solely on the athlete’s abilities, accomplishments, performances and accolades from during the past decade, not on the popularity of the athlete.” We believe him. Kind of. This may be the most surprising pick on the list. Not many people, after all, recognize Nestor’s accomplishments on the tennis court. But he has been one of most accomplished doubles competitors since he turned pro in 1991. Nestor sports a mere 85-119 record, which means he doesn’t exactly excel in singles matches. But in doubles? That’s a different story. Holding an impressive 718-278 career record in doubles matches, Nestor has won 65 titles, including five grand slams and a gold for Canada in Sydney. When discussing national hockey, most Canadians will mention the men’s team and how they won that gold medal in the 2002 Olympics in Salt Lake City, overlooking the women’s team entirely. Yet they are the more consistent of the two, winning two Olympic gold medals in 2002 and 2006 and nine Gold medals in World Championships. And who was the most integral part of these award-winning teams? Savvy veteran Hayley Wickenheiser.

The Saskatchewan native has contributed to 11 gold medals for Canada at the four Nations Cup tournaments and been named by Sports Illustrated as one of the “25 Toughest Athletes.” Deserving? I think so. The British Columbia native may come from a country that produces little basketball talent, but he sure has made the most of his opportunity in the NBA. Since he was selected 15th overall by the Pheonix Suns in the 1996 draft, Nash has won two NBA MVPs and is a seven time all-star as well as winning Canadian accolades such as the 2005 Lou Marsh Trophy and a two time Lionel Conacher Award winner for best Canadian male Athlete. Not bad for a guy who only started playing basketball in the eighth grade. Born in Winnipeg, Manitoba, Klassan is the most decorated Olympian in Canadian history, winning a Canadian-first five medals at the 2006 Turin Olympics. Her speed skating career began when she failed to crack the 1998 Canadian Women’s National hockey team. Seldom has a career change turned out be such a blessing in disguise. Quite possibly the greatest goalie in the history of the NHL. Enough said.

Don’t believe it? Brodeur holds the records for the most regular season NHL wins, most shutouts, most 40-win seasons, most consecutive 35-win seasons, and most games played by an NHL goaltender, and is the only NHL goalie to ever score a game-winning goal.

The most amazing part? He’s done it all while with the same team, the New Jersey Devils. Guaranteeing himself a nomination into the Hall-of-Fame, Brodeur has proven to be the best at what he does. Nobody from any previous generation comes close to his career accomplishments. His status as the  number one Canadian athlete of the 2000s should come as no surprise.