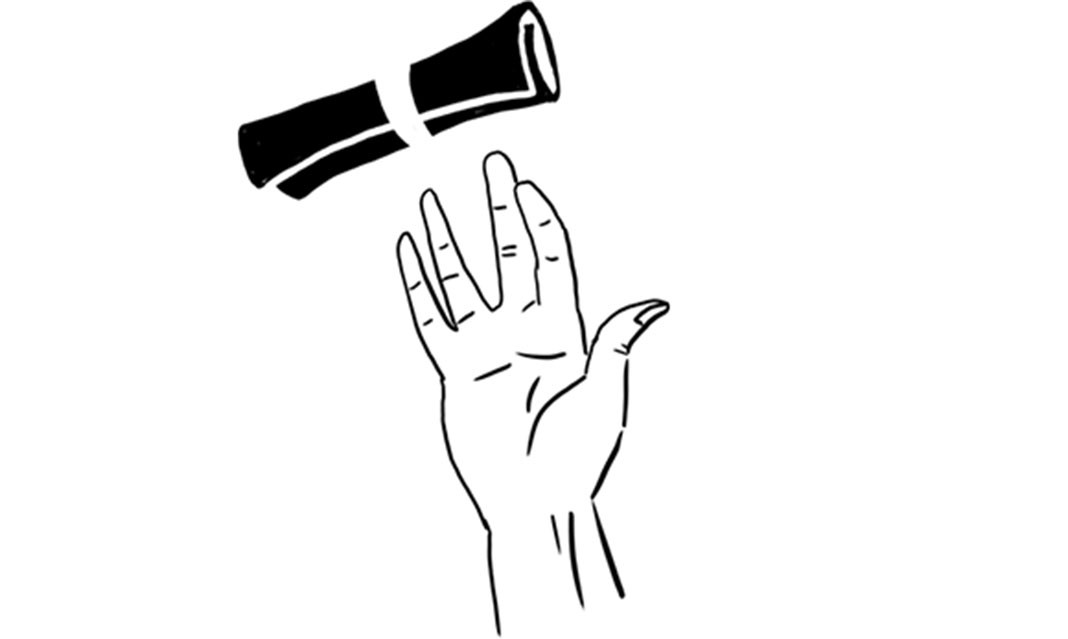 I was at a walk-in clinic several months ago, filling out the required information form, when I found myself blanking on what to put as my occupation. Should I write in student? But I had graduated in May. At work, my official title was “researcher”, and I guess my work was now what primarily occupied my time. But calling myself a researcher felt stupid. In a hopeful gesture towards my upcoming graduate school applications, I wrote in “student”, but then cringed inwardly when my doctor asked me how school was going. “Good,” I said; I couldn’t muster the mental energy to explain my weird, neurotic lie on the form. Besides, I was aiming on being a student again next year, anyway. That is, if I’m accepted into graduate school.

If we’re no longer students once we graduate, then what are we? The vast majority of my friends who happen to be recent grads are suffering from some kind of post-graduate identity crisis. A mental survey of my peers reveals a variety of responses to this problem. Many have moved back home; some have financial reasons for it, and others just want to be back in the nest. A few have gone on to college, teacher’s college, law school, or medical school to further define themselves professionally. Some have climbed back up into the womb of academia by going to graduate school. Some are “just chillin’” (their words). Very few have managed to claw their way into a position in their field. Most are working at jobs for which they are vastly overqualified. Many are “finding themselves” through travelling, or at least talking wistfully about it.

My reaction to my own graduation was to try to find my way back into sweet, sweet Mother Academia as soon as possible while working a well-paying 9-to-5. I started the job as soon as I finished up my exams, and was immediately exhausted. I never thought that sitting all day could sap my energy so much. My coworkers were all nice, but they were “office nice”, making awkward small talk with me in the communal kitchen while I waited for them to finish with the microwave.

After months of typing and clicking while hunched over a keyboard, I developed pain and numbness in my hands. I slept poorly, waking up with pins and needles and running cold water over my wrists at 4 a.m., shaking my hands to try to wake them up. The doctor at the clinic suggested it might be carpal tunnel syndrome and referred me to a rheumatologist for testing.

I liked having a job that clearly separated work from the rest of your day—so different from student life, where there’s always some assignment you could be working on. After you graduate, your free time is truly free, and you’re accountable to no one. You can spend entire weekends just blazing and watching Breaking Bad! …On the other hand, you might spend entire weekends blazing and watching Breaking Bad. It’s a gift and a curse.

At the rheumatologist’s office, I didn’t lie again—I wrote “researcher” on the form. It still felt dumb. The doctor, sticking electrodes on my arm, asked me what I studied in school. “Art history,” I said. He smirked, zapped me, and asked, “So what does that qualify you do to?” (Thank God I left out my minors in philosophy and women’s studies!) I wanted to counter with some liberal arts mumbo jumbo about “knowledge for knowledge’s sake”, but the man was running an electrical current through my forearm. I muttered, “It qualifies me to go to graduate school.”

It’s easy, as a student, to simply swing from essay to essay, class to class, year to year. But I’ve heard it so many times from so many of my fellow graduates: when the next hurdle isn’t laid out in front of you, you have to make it yourself—and the choices are terrifying and endless and paralyzing. What to do? How to spend my time? What to make of myself? What makes someone an adult, anyway? Having a degree? That can’t be right. Having sharp knives in the kitchen? Having a kid? Feeling exhausted at the end of the day?

The smartass rheumatologist told me my nerve conduction was fine. No carpal tunnel. As usual, I followed up with some Google later that evening. According to the Internet, some medical professionals think carpal tunnel syndrome isn’t just caused by work-related activities. The symptoms can be produced by stress and anxiety.

I left the researcher position because of my hands. They were nice about it. Office nice. I work at a café now. I fell into this kind of work really easily—I think I missed talking to people and being on my feet more than I realized. I like making sandwiches for people. I’m very understanding when they tell me they’re having trouble deciding. “I know!” I say, sympathetically. “There are so many options!”

The pain and numbness has subsided, for the most part. I’m still waiting for my application results. I think once they come in, I might go travelling.