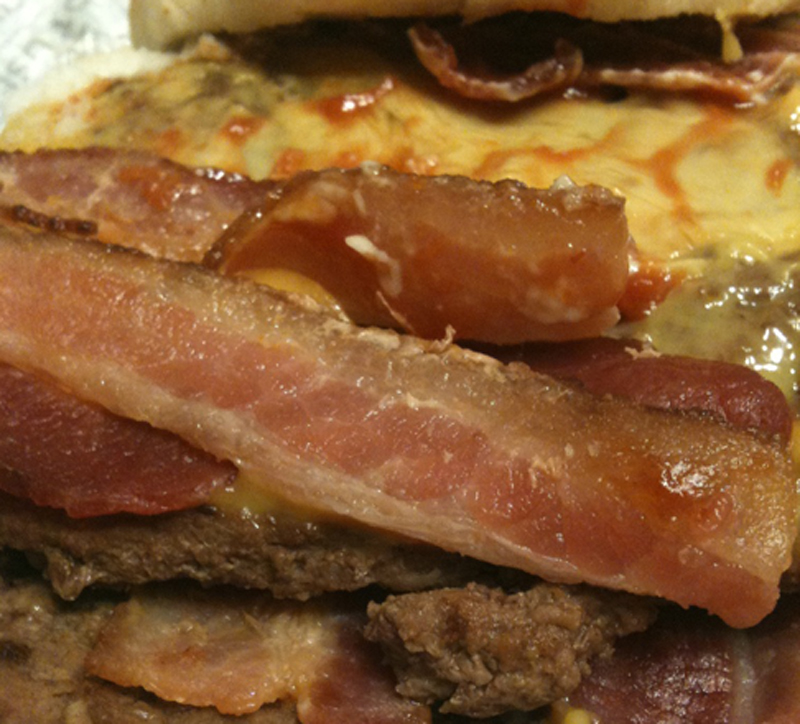 In 2004, one man was brave enough to plow through a one-month binge of high-calorie protein, high-sugar soft drinks, and a cavalcade of low-nutrient hamburgers. Morgan Spurlock, a 41-year-old West Virginian, went on a 31-day McDonald’s binge in a film that made audiences laugh, feel disgust, and (admittedly) develop a hankering for some golden arches in the movie “Super Size Me”. Ever since the release of this movie, fast-food restaurants like Wendy’s have done away with their extra-large sizes.

Wendy’s is one of the major fast-food chains in Canada. They used to celebrate their “Biggie” and “Great Biggie” sizes, which only cost about 30¢ more—who could resist that?

As msnbc.com reported in mid-2006, Wendy’s decided to eliminate their “Biggie” option and cut down on trans-fatty cooking oils in order to cut calorie consumption for their patrons. What was also reported was that their sizes were shifting because of this decision: the large is now the medium, the medium is now the small, and the large has been replaced with a 42-ounce trucker-sized beverage which barely fits in your hands. So, beneath the surface, Wendy’s is still serving up the “Biggie” portions, they’re just changing the name to make it seem like they’re cutting-edge and healthy.

Wendy’s elimination of their “Biggie” size was not globally advertised and did not receive much attention until their workers were told to ask “Would you like a small, medium, or large combo?”

In 2006, they removed “Biggie” labels from all their drink and fry containers, but didn’t actually change the sizes at all; on the contrary, their sizes actually became bigger under the guise of cutting back their sizes.

The former 32-ounce “Biggie” beverage shifted to their standard medium. The former 42-ounce “Great Biggie” beverage is now the comically large size. The former 5.6-ounce “Biggie” fries is now a medium, and the former 6.7-ounce “Great Biggie” is now the large. So, supposedly Wendy’s customers can now feel better about themselves knowing that the multi-national food chain is cutting back its sizes and eliminating the extra large sizes—but they’re really not; no wonder they never advertised this new frame of mind.

But hope is not lost. Much like the other fast-food chains, Wendy’s also came out with its own line of healthy selections, including their new range of salads! But wait, there’s more! According to their online nutrition calculator, their range of salads contains the same amount of calories as their ½-lb. double with cheese hamburgers.

Now, the consumer is left with three decisions: eat a salad, eat a hamburger, or stop eating fast food altogether—it’s surprising how many Canadians will never reach for the latter option.

This brave reporter went into the Burlington Wendy’s located on Fairview Street (right beside the Burlington Mall) and ordered the biggest thing on the menu to shed some light on just how big these sizes really are.

1:14 p.m. I walk up to the front counter and order a Triple Baconator and ask for the large combo. I’ve had a bad experience with their bacon before where it came out all white and rubbery, so the server made sure that the bacon was crispy and not made of rubber this time; apparently you have to ask for the good bacon when you order at Wendy’s. I sit down at the table. The food takes up the entire tray. I start eating.

1:22 p.m. I am halfway through the meal and I feel fine. No notable changes except for my elevated mood; what do they put into these burgers that make me so damn happy to eat them?

1:26 p.m. I’m starting to feel a big flush and I feel like utter shit. I’m a third done my burger and have barely dented the fries and drink.

1:32 p.m. I am done the burger. The fries are almost done and I’m about halfway through my large Fruitopia. I begin to lose my breath and sweat heavily.

1:37 p.m. I have devoured the rest of the fries. I have a piercing headache and my hands tremble. My body shudders, but I’m not cold. I start seeing little green circles floating in the air. This can’t be good.

1:49 p.m. I gulp down the rest of the Fruitopia and feel like I am going to die. My body quakes with twitches, my head sweats with tears of fatigue, and my stomach is kicking the sides of my body—it must be angry at me. I start to feel lethargic and stagger home where I sleep for the next six hours, only to wake up and have the same pounding headache and sweats. I didn’t eat anything else that day.

The shocking truth behind this experience is that some people do go into fast-food restaurants and order the biggest things on the menu because their bodies have long since adapted to the ever-expansive menus.

Health Canada recommends that the average healthy Canadian should only consume 2,000 calories per day in order to lead a healthy lifestyle. Well, in my one meal, I acquired nearly 2,200 calories.