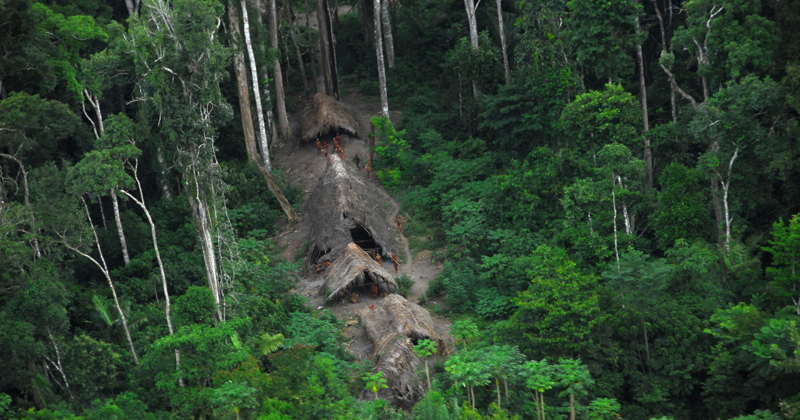 The Amazon River is the largest river in the world, flowing over 6,000 km through Peru, Columbia, and Brazil into the Atlantic Ocean. Survival International, a native rights group, estimates that there are 67 uncontacted tribes—of the total 100 found throughout the world—that live along this basin. An “uncontacted tribe” is a group of humans that has had no contact with the modern world. Often, this means that isolated tribes live a hunter-gatherer lifestyle.

However, the case may be that many uncontacted peoples are not unaware of the world around them; they have just chosen to live apart from it. Experts say there are few, if any, tribes that have had no outside contact at all: it’s more likely that previous generations had negative encounters with these contacts, prompting social taboos that drive clans deeper into isolation. In the Amazon specifically, the rubber boom that lasted from 1870 to 1914, and saw the enslavement and massacre of natives, probably gave uncontacted tribes some hint of the Western world.

Once again, Amazon lands are experiencing oil and gas booms, but supporters of native groups say the boom is a bust for remote Amazon Indians, who suffer both physically and socially when exposed to the modern world. These natives are especially vulnerable to foreign disease: in the early 1980s, petroleum exploration by the British-Dutch Shell Oil Company led to the first contact with the previously uncontacted Nahua tribe. Within a few years more than half of the Nahua tribe had died.

Now civic groups and native organizations are pushing governments and the courts to rein in oil development. In December, a coalition announced it would petition the Organization of American States to protect the Cacataibo, said to be the last uncontacted tribe in the central Peruvian rain forest. Meanwhile, Peruvian officials have complicated an otherwise typical development clash by asking: do unseen natives even exist? Activists have answered that the elusiveness of some rainforest tribes, coupled with the threat of infection posed by outsiders, makes getting an accurate census near impossible.

Many companies are still taking precautions to protect both their workers and any natives that might be encountered. In the summer of 2007, U.S. oil firm Barrett Resources and Spain’s Repsol-YPF submitted plans to Peruvian officials describing how their workers would respond in the event of encounters with isolated tribes. The document advised workers to be on the lookout for footprints, spears, arrows, and other signs of humans. The Barrett manual advises workers that uncontacted natives might become curious about noises, helicopters, and lights, causing them to leave items that signal a desire to make contact with workers. Both plans prohibit workers from having any contact with natives or giving them food or other objects. The documents order workers to treat Indians peacefully, making efforts to protect them from illnesses. Some activists and scientists argue that we should leave these tribes untouched. As development continues to encroach on tribal territories, activists are buckling down.

Native rights groups like Peru’s Racimos de Ungurahui note that in recent years fatal illnesses have beset tribes like the Nahua, Nanti, and Kirineri after they came into contact with oil workers. A native rights group based in Lima called AIDESEP is calling for the establishment and protection of government-protected parks for uncontacted natives.

Others say more contact is inevitable, and that managed contact is a better strategy than unmanaged; strategies should be determined on a case-by-case basis. For instance, many groups are thought to be in forests that already have a protected status through the country’s government, but developers and logging companies routinely encroach on protected areas: in 1996, loggers that were illegally harvesting timber came into contact with the Murunahua (or Chitonahua) Indians. In the years following first contact, about half of them died from diseases and violence.

At the request of AIDESEP in 1997, the Peruvian government created the Murunahua Territorial Reserve, measuring 482,000 hectares, located in the province of Atalaya and department of Ucayali. The reserve was meant to protect Murunahuas that had been recently contacted and those voluntarily living in isolation. However, Peru’s INRENA (Instituto Nacional de Recursos Naturales) has reported that loggers are destroying the natives’ rainforest by illegally cutting timber inside the reserve.

Just as in the past, future oil exploration authorized by PeruPetro in the Kugapakori-Nahua reserve will most certainly lead to more violent encounters with the Nahuas and other Amazon Indians who have chosen to live in isolation. For instance, the Camisea natural gas pipeline project has become particularly controversial. Frequent leaks from the Camisea pipeline have  severely polluted the rainforest ecosystem of the Amazon rainforest, which these uncontacted indigenous people depend on.

On a positive note, the many countries have recently passed new laws to protect uncontacted natives.

In May of 2006, the Peruvian Congress approved Law 28,736 to protect indigenous tribes currently in isolation or recently contacted. Despite both international and individual country laws that protect uncontacted tribes, current activities by loggers and oil companies are putting in severe risk the survival of uncontacted indigenous tribes in the Amazon.