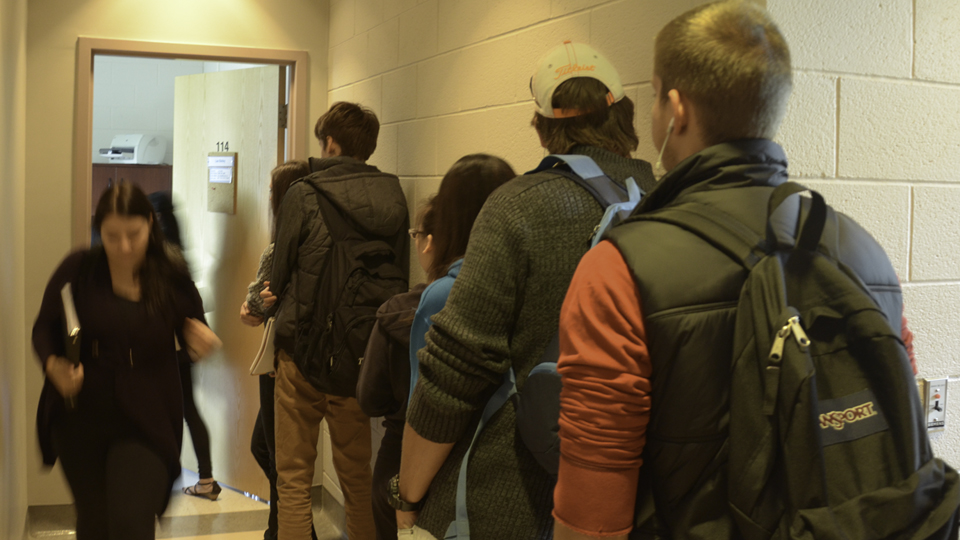 Clammy hands? Loss of words? Don’t worry, it’s common among undergraduates to sweat, stutter, and go blank when speaking to their professors. Conversations that last for 20 seconds feel like hours, questions that needed to be asked are forgotten, and even planned meetings go by in a blur. Many students feel intimidated by their professors.

But why is this fear so common? Why do so many professors plead with us to come to their office hours, only to sit in an empty office waiting for the time to pass? If you’re a first-year, have you ever asked yourself why you get nervous around your professors? Do you have a sense of inferiority? Are you worried about making a bad impression?

“It really depends on the professor,” says Ayan Dine, a third-year student of English and women and gender studies. “If they’re nice and outgoing, then sure, I wouldn’t mind going to office hours. But if they’re intimidating, and they’re really strict and stern, I wouldn’t go. I’d be too afraid.” Dine added that she feels more comfortable visiting professors during office hours when they make an effort to build a relationship with their students.

For many students, the first time they walked into their professor’s office hours, the main concern was “trying not to sound stupid”.

Andrew Sepielli, a philosophy professor, understands this feeling. “It’s much easier to get into conversations with people when you presume that the person thinks well of you,” he says. “But if you’re not really sure, and if you really value the other person’s opinion, then you might avoid those circumstances.”

Sepielli explained that although some professors seem intimidating, it’s really just their teaching styles that give students that impression. “Some professors respond in a sort of adversarial way,” he explains. “I feel like professors kind of see argumentation, and back-and-forth ‘Is this right? Is this wrong?’, as the kind of fundamental mode for interaction, whereas most people don’t.”

Most people need a natural dose of small talk before they can begin interacting at that level—which makes the kinds of professors Sepielli talks about seem too intense.

As Sepielli sees it, students shouldn’t be afraid of their professors. After all, sometimes the professors are just as nervous about interacting with the students. “You know how if you’re going camping in the woods and you see a bear, people say ‘The bear is more afraid of you than you are of it’?” he says.

He says students should worry less about looking foolish in front of their professors. “One thing to remember about professors,” he adds, “is that everyone who does this for a living loves what they do, to an inordinate degree.” He says that professors appreciate the enthusiasm that makes you speak to them in the first place. In other words, you can’t go wrong talking to someone about what he or she loves.

On the other hand, not all students find their professors intimidating. Professor Lee Bailey, for example, who teaches economics, has office hours three times a week for the same class. His office is always full.

What does this mean? Are some professors simply less intimidating? Or does the fear of doing poorly in certain classes outweigh the fear of the professor? Or perhaps it’s just a matter of proportion. The intros to economics and  psychology usually have more than 1,000 students enrolled in each.

In their upper years, students may also begin to go to their professors’ office hours more. Classes become smaller and more familiar, and meanwhile, it becomes necessary to meet with professors outside class for things like proposing a thesis or proceeding with independent research. And once in a while, office hours are purely a discussion between people who are passionate about the same topic.

So maybe it’s all a misunderstanding. Maybe professors don’t really mean to be intimidating at all. Besides, on the students’ side, does it make sense to worry about looking like less than a genius in front of someone who’s supposed to guide you? Probably not.

Nevertheless, many students will continue to feel that way. But hopefully, as time passes, your enthusiasm for the subject might tip the scale and finally outweigh your fear. You’ll just hold your breath, walk in with a smile, and realize they’re not as scary as they seem.