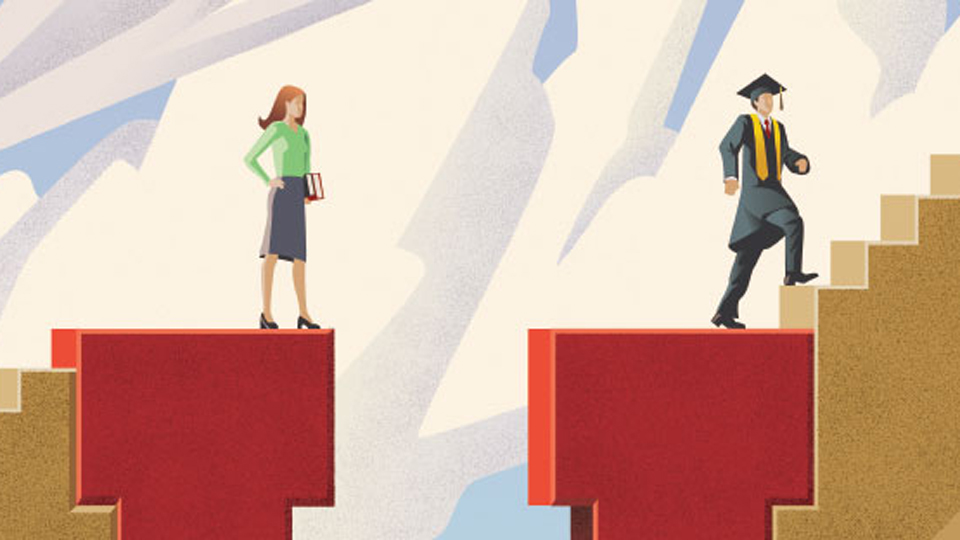 More and more women attend university at an undergraduate level today than ever before. For example, in UTM’s 2009/10 year, we had 6,137 girls enrolled, compared to 4,573 boys. These numbers may suggest that female students are trying harder both to get into an undergraduate program and to stay there.

In an informal poll of 10 female students at UTM, seven said they didn’t feel the need to work harder than men in university. They said they didn’t feel the need to prove themselves on the basis of their gender. One of the seven, Patricia Cleigo, explained the reason for her answer. She feels that there is an equality among students, that “they are not criticized based on their gender or nationality, but on the quality of the work they submit and how they conduct themselves”. Another of the seven, Edna Bovas, believes that students are evaluated solely on their intellectual contributions.

And yet, of the seven students who said they felt no gender pressure at a university level, two said this was not the case in the workforce. And five of the 10 polled said there was still pressure to succeed in a male-dominated workforce. Three of the students felt the need to outperform their male counterparts at university in fields historically considered “proper to men”, such as science and engineering, to have an equal chance at employment in these fields. One CCIT student said that in our culture, women still have to give up more if they want to pursue the same careers as men. The student believes that women who passionately pursue their careers are perceived as aggressive, whereas men who do the same are well-regarded and considered ambitious.

And nine out of the 10 said they felt a pressure to prove themselves smart in general.

Harsimer Singh, the events coordinator of the UTM Women’s Centre, discussed the result of the cultural and ideological shift that took place several decades ago: it became socially acceptable for women to pursue postsecondary education instead of marriage after high school. Before this shift, female university students felt pressured to live up to their family’s expectations and prove themselves particularly worthy of the investment. The question is, do female students still feel this way?

Another student, Julianna Chianelli, raised the point of unequal pay in the workforce. In 2010, the Canadian Human Rights Commission released a report that stated that women working full-time made an average of only 72 cents for every dollar earned by men. The report explained that one cause of the gap is the difference in the type of work men and women do. Nursing, sales, and clerical work were cited as examples of lower-paid positions typically held by women.

Chianelli also supposed that there are more female students in the humanities than in business and science. Since positions that require humanities degrees are generally lower-paid, Chianelli feels that, in a way, society is training women for lower-paid positions by valuing their skills less.

Rebecca Witney pointed that while she feels there is no gender discrimination at university, she still feels that certain stereotypes encourage different educational routes.

“Boys are given toys to build with while girls are given dolls to play with, so it’s assumed that boys are better at math and engineering than girls,” Witney said.

The role that stereotypes play in students’ expectations when they come from high school is something Professor Rhonda McEwen says she has observed in her CCT classes.

“There are the guys who come for all the techy stuff and the decoding and then they realize that there is a lot of reading, and then the girls come in and they are scared of the technology. And maybe there are guys who are scared about the technology, too, but they don’t want to share it with me, because they think I have stereotypical expectations of them and I’ll think less of them if they don’t fit that.”

McEwen cited that there is usually a balance between the genders of the students with the highest marks from every high school.

Whether it concerns the salary gap or the pressure to prove themselves as “smart”, it seems some female students are still worried about gender differences.

Professor Catherine Phillips of the French department observed that while there are generally more women than men in language courses, the males who are in the classes are strong in the subject. She also noted that when it came to class participation, female students who are strong in a subject tend to refrain from answering questions when they felt others needed a chance to participate. Male students, she said, are more likely to answer a question when they know the answer, whether or not the professor wanted the rest of the class to participate.

So do female students feel they need to prove themselves in their classes? According to our informal poll, probably not. But of those who said they didn’t feel pressured to outdo their male counterparts in university classes, many said there was some difference in how they perceived their performances.

Whether it concerns the salary gap or the pressure to prove themselves as “smart”, it seems some female students are still worried about gender differences. And that worry may manifest itself in things like class attendance, academic performance, and university enrolment, and become self-fulfilling.