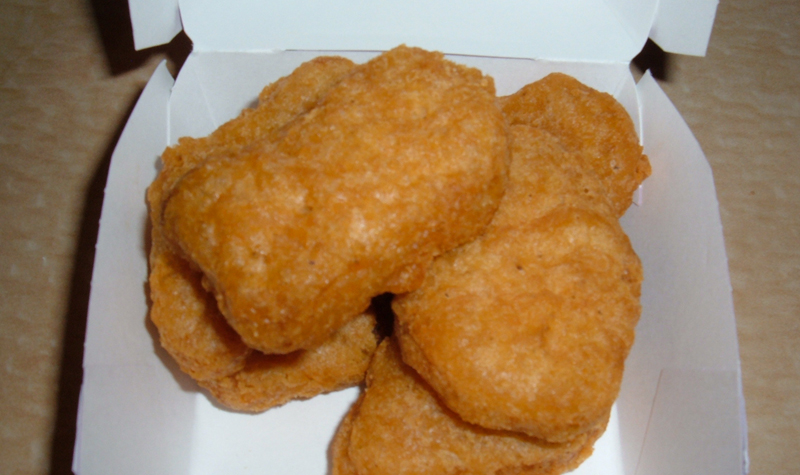 It should come as no surprise to read that some of the things we eat are not very healthy; I say things because, frankly, a lot of it just isn’t food. There’s a general realization that much of what we consume is in fact awful for our health: full of preservatives, colourings, and all sorts of other nasty additives, and yet a company like McDonald’s is still the largest owner of real estate in the world. Why, then, are we still so compelled to continue consuming these products? Some have suggested clever marketing, with brand names being indoctrinated into the human subconscious through years of advertising; others suspect addictive substances contained within the food itself. Perhaps it’s just laziness, the convenience of purchasing a meal that’s already been prepared.

Even the preparation itself is something we don’t like to put a lot of thought into, like what happens exactly in the process of an animal becoming a gray-brown patty of exact burger-sized circumferential specifications. Recently, there have been some images and videos floating around the web, detailing the appetizing process of “mechanically separating chicken”, which is used to create chicken nuggets. All of the actual chicken is gone before the process even begins; the leftover carcasses—bones, ligaments, tendons, etc.—are blended into a pink paste which is disinfected with ammonia (commonly found in bathroom cleaning products), and coloured, flavoured, and scented with additives to make it seem like—well, food. Perhaps I’m old-fashioned, but I’ve always thought that food was disinfected via high temperatures, also known as cooking, rather than being bathed in chemicals. Anyway, the treated carcass paste is then cut into little nugget shapes, ready to be deep-fried and served. One could imagine that if huge profits are being made off the refinement of chicken carcasses, then perhaps similar practices are being applied to other meats as well.

Among other things, there is also an unnatural inclination to consume junk food. Soft drinks contain an average of 10 teaspoons of sugar or sugar equivalent, and are so sweet that phosphoric acid is needed to make the drink palatable. Oddly enough, most of the nutrition-deficient and sugar-laden junk food we eat doesn’t even have sugar in it; it’s too expensive. In order to cut production costs, most companies have turned to a cheaper alternative: high-fructose corn syrup. Studies have shown that for the human metabolism, HFCS is even more harmful than sugar. Worse yet, some have shown that many samples of HFCS contain traces of mercury, which is highly toxic.

Despite the facts and figures, these treated, packaged, canned, wrapped, sealed, preserved, and mechanically separated foods are still being sold with massive success. How bad can it really be, you might say? After all, people eat these things on a daily basis and yet are still living and breathing. The human body has an amazing capacity for survival, it’s true, and sustains itself through a great deal of punishment and nutritional lack. Still, the physical concerns are clear; the World Health Organization classifies coronary heart disease and stroke as the leading causes of death throughout the globe, both of which are highly correlative with poor dietary choices.

More startling, perhaps, is recent research which has shown that poor dietary choices, in addition to physical disease, can also lead to a wide variety of mental illness. Dr. Hyman, author of the recently published book The UltraMind Solution, writes: “The average American consumes literally pounds of hormones, antibiotics, food chemicals, additives, artificial sweeteners, and MSG each year. Each one of these toxic chemicals has been shown to harm the brain.”

Hyman suggests that most psychological issues, from laziness to depression to autism, can be linked to nutrient imbalances caused, in large part, by the things we eat. Hyman focusses on the functions of many different vitamins and minerals in his studies, but let’s focus on one in particular: magnesium.

“The list of conditions that are related to magnesium deficiency is very long,” he writes. “There are more than 3,500 medical references on magnesium deficiency.” You may suffer from a magnesium deficiency if you experience any of the following: “anxiety, autism, ADHD, headaches, migraines, chronic fatigue, irritability, muscle cramps, insomnia, palpitations, angina, constipation, fibromyalgia, asthma, kidney stones, diabetes, obesity, osteoporosis, high blood pressure, menstrual cramps, and more”.

One study of hospitalized patients, published in the Journal of Intensive Care Medicine, concluded that if you are magnesium-deficient, you are twice as likely to die. Well, where does dietary magnesium come from?, you might wonder. First of all, the typical North American diet is not only magnesium-deficient, it actually actively depletes it from our bodies. “Magnesium levels are decreased by excess alcohol, salt, coffee, sugar, phosphoric acid, antibiotics, etc.,” says the study. Now, what provides magnesium? Dark green vegetables, halibut, nuts, and beans. There are certainly big names pushing for the sales of alcohol, coffee, junk food, and sodas, but who is marketing the veggies and nuts? Most people I speak to actually try to avoid nuts because they’re high in fat—when in truth dietary fat, especially the healthy kinds, has absolutely nothing to do with the accumulation of bodily fat. (By the same logic that misleads people to thinking that eating fat makes fat, eating brains should make brains.) Not only, then, are nutrient-depleting foods heavily suggested by marketing and availability, but the foods that do have these nutrients are actually avoided… Spinach? Gross.

The whole picture is quite frightening when you start to think about how our diet is shaped by social influences, that there are powers that could be directing your subconscious towards foods that cause physical illness and mental instability, and that there are entire industries which depend financially on illness for their success.