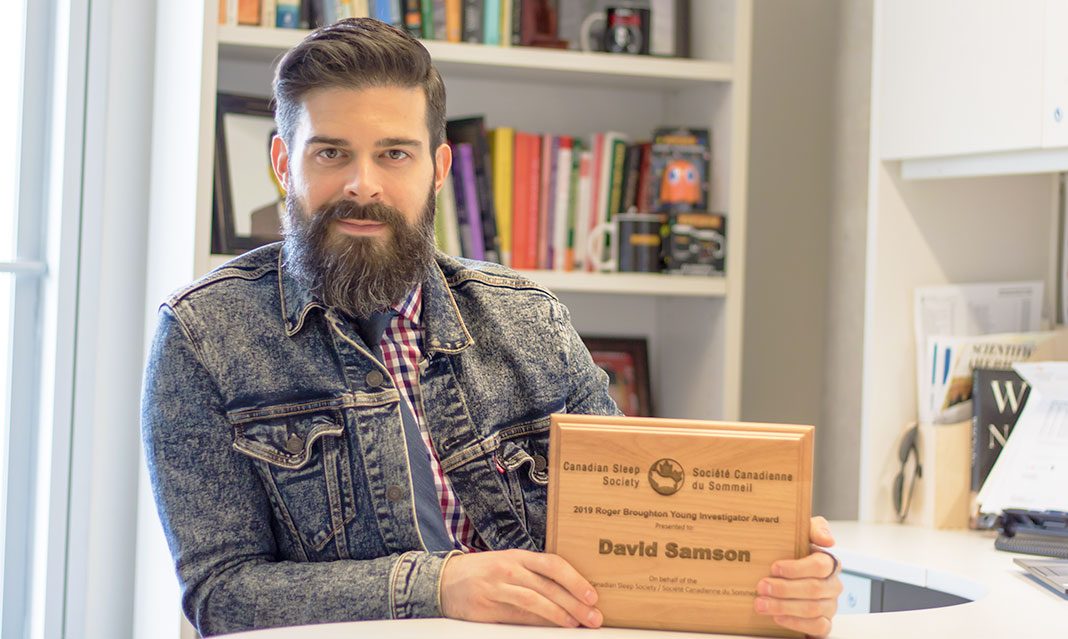 Dr. David Samson, assistant anthropology professor at UTM, won the Roger Broughton Young Investigator award at the World Sleep Society’s conference in Vancouver this September. The Roger Broughton Young Investigator award recognizes junior scientists who have made significant contributions to sleep research. The Medium sat down with Dr. Samson to discuss the award and his research on sleep.

Samson says winning the award is an indication for him “that [he is] on the right track.” While the majority of sleep researchers are neurologists by training, Samson is an evolutionary anthropologist and therefore, approaches sleep from an entirely different perspective.

Working with wild chimpanzee populations and studying their sleeping platforms as a graduate student sparked his interest in sleep. Samson also observed orangutans at the Indianapolis Zoo and experimentally manipulated the type of sleeping environments of the orangutans. Some nights, Samson and his team would provide straw material, whereas on other nights, they would provide high-quality foam. When the orangutans slept on better material, “they actually scored better the next day on touch screen cognitive tasks [and] had better accuracy.”

Samson has worked with small scale hunter–gatherer societies such as the Hadza, an indigenous ethnic group who live in Tanzania. The studies with the Hadza revealed that “our sleep is linked to our sleep environments and our downstream ability to perform.”

Sleep’s importance extends beyond humans to primates and perhaps, animals as a whole. However, very few researchers, including Charles Darwin, an influential evolutionary science scholar, have studied sleep in the context of evolution. When Samson realized that “no one [was] looking into sleep’s role in human evolution,” he decided to pursue this field equipped with the phylogenetic skills he learned at Duke University and the limited existing literature on the topic.

Samson’s work reveals that “humans are bizarre sleepers.” He says that “we are evolutionary outliers when it comes to two things: we know the qualitative feeling of being sleep-deprived and having that downward shift in mood—that lack of ability to quickly shift our cognition to higher levels. We know that our minds and bodies are linked to our sleep, because we feel this every time we are sleep-deprived.” However, while one would predict that “since humans [have the largest brains out of all] primates and we need sleep for high level cognitive functioning, they would sleep the most,” humans “surprisingly sleep the least out of any primate on the planet.”

The second behaviour which makes humans evolutionary outliers is that “out of the short seven-hour average [time spent sleeping], humans have the greatest proportion of REM [out] of any primate.” REM, which stands for rapid eye movement, is the deepest stage of the four-stage sleep cycle and contributes to “innovation, memory consolidation, emotional recollection [which are] all these things we think of as important to human success.”

While REM contributes to vital cognitive skills, it also increases our susceptibility to danger. During the REM stage, humans require a significantly higher level of arousal to awaken. Therefore, if someone calls your name during REM, you might not wake up. To summarize, human sleep is shorter in duration and has a longer REM stage as compared to other animals and Samson mentions that “humans had to overcome some challenges in our environment and ecosystem” to sleep this way.

To demonstrate the importance of sleep, Samson starts his ANT402H5: Wild Nights: Sleep, evolution, and performance in the twenty-first century class with a “chronohack.” Chronohacks tap into a person’s circadian rhythm to improve their quality of sleep or activity upon waking. Samson’s best advice is consistency: sleep at the same time every day and wake up at the same time every day.

“If you’re super consistent overtime, allow the environment to cue into your suprachiasmatic nucleus—the master circadian clock [in the brain,] and you get that as amplified and synchronized as possible to your environment, then your body knows when things are going to happen. Your sleep quality is increased, [you have more] restorative sleep, and the idea is [that] you wake up [feeling] completely ready to tackle the day.”

Light hygiene also plays an important role in determining the quality of your sleep. Samson advises minimizing light sources, especially sources of blue light such as cellphones and television. He challenges students in his class to take light hygiene a step further and only use candle light after sunset.

Samson acknowledges that for students, it is challenging to consistently sleep around seven hours each night while juggling deadlines and tests along with jobs and extracurricular activities. Another “big trade-off for young adults is shortening social alliances over sleep. Often, [young adults] choose building social capital over sleep.” However, it is important to remember that while making time for sleep when one has so much to do may seem counterintuitive, sleeping properly can improve cognitive function and productivity leading to an overall better performance.

Samson continues to search for more answers about sleep. Currently, he is working with communities in Northern Alaska and specifically elders among the Yup’ik communities. The “massive variations in light and temperature” in Northern Alaska have “an impact on the timing of sleep and activity.” Samson spent this summer building relations in Alaska to help “interface with the community” and will continue to study their sleep patterns using actigraphy, a non-invasive method of monitoring cycles of rest and activity.

His future research plans include looking at the flexibility of sleep in the primate order and creating a database of natural human sleep outside of the Western context.