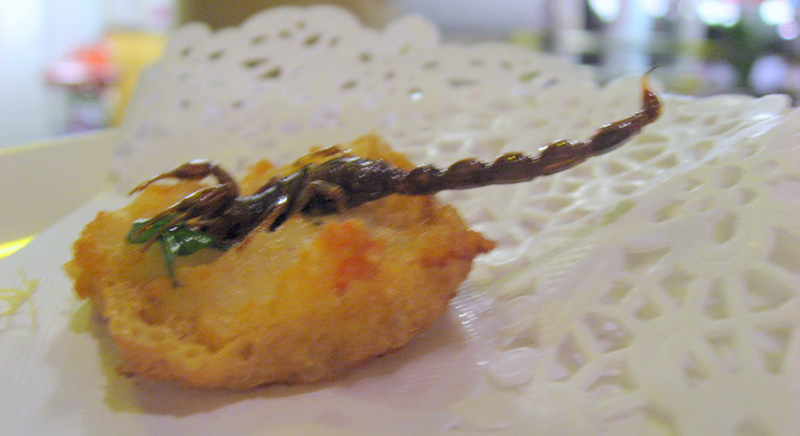 Living in a multicultural society, we’re exposed to a huge variety of ethnic foods. International cuisine has incorporated different dishes from different cultures, and a lot of us have also incorporated different ethnic foods into our own diet. Eating food from different cultures has become the norm in our society, and our perception of “ethnic” food has changed. For example, a bowl of pasta does not really seem ethnic to me (and no, I’m not Italian). A bowl of pasta to me is a Thursday night dinner. The point is, we’ve all grown used to what used to be “ethnic” food.

Personally, I’ve tried almost everything—and I mean almost. And looking over some food reviews in our very own city of Toronto, I stumbled upon some interesting but really weird dishes.

Anyone want to try frogs? If you live in Etobicoke or in west Toronto, you might want to check out La Petite France. It’s a romantic dressy-casual restaurant. You might want to bring a date along. Their “Garlic Sautéed Frog Legs à la Provençale” is a specialty. If you live in Downsview area in northern Toronto, you can check out Le Montmartre. This French restaurant also has a romantic casual setting, but most importantly, it serves frog’s legs sautéed with tomatoes concassé, garlic, and herbs. That dish doesn’t sound too weird. I wonder how it looks or tastes.

For any of you adventurous diners, I have the perfect restaurant: Toronto’s Atlantic restaurant. It’s located in Brockton Village, West Toronto. It’s a traditional-casual American restaurant but its dishes sound pretty weird. They serve platters of ants, scorpions, worms, frogs, crickets, and jellyfish. In one review, the head chef mentions the many customers who (apparently) enjoy these dishes.

If you want to experience some East Asian delicacies from Vietnam or Japan, try the New Sushi Island Japanese Restaurant, located downtown Toronto at College and Crawford. It’s a casual Asian restaurant that serves an ethnic dish of scorpions. The fire scorpion roll, as listed on the menu, is actually limited one per table for all you can eat. If everything is unlimited except the scorpion, does that mean that it’s actually a delicacy? Or maybe scorpions are just limited here in Toronto…

There are so many restaurants that serve the strangest foods. But who knows? They might actually be delicious. Sometimes we like to mix it up a little and try something new, something ethnic. So if any of you readers are wild, adventurous diners who are always craving or willing to try something new like frogs or crickets or scorpions, you all know where to satisfy those cravings! At least you know where to start.