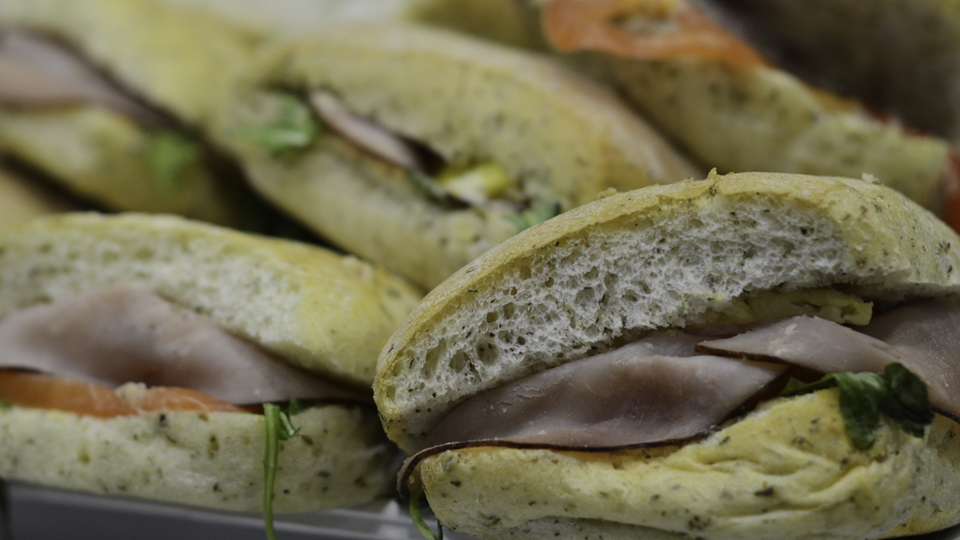 The sandwich is a brown-bag classic. Come university, it becomes not just the perfect choice for lunch, but sometimes breakfast and dinner too. It’s a quick, cheap, and—depending on what you put on it—healthy.

Thankfully, our campus has no shortage of sandwich options. I scouted out what UTM has to offer by tasting different versions of the humblest of sandwiches: the ham and cheese. This classic features all the components that make up a well-composed sandwich: meat, cheese, veggies, bread, and condiments. Let’s break a little bread!

The king of the sandwich world offers the classic ham sandwich on a 6- or 12-inch sub on any flavour of bread (mmm, flatbread) and with any combination of vegetables. Despite the reputation of Subway’s breads, the vegetables were the standout feature. The romaine lettuce was crisp and the tomatoes juicy and plump. Because the vegetables were fresh, they held their texture, smell, and flavour. On the other hand, the mustard—the classic condiment for a ham sandwich—was sour and a little overwhelming. Subway’s ham sandwich is the most wallet-friendly on campus, weighing in at under four dollars.

When you think of Tim Hortons, you might immediately salivate over the thought of sugar-drizzled doughnuts with a steaming coffee. But never dismiss Timmies when it comes to sandwiches. Their take on the classic ham was beautifully presented: neat and tidy with an even distribution of toppings. But the ham and cheese were definitely the stars here. The sweet, tangy, rather untraditional mustard complemented the sweetness of the ham, while the cheese was sharp with a good bite. The bread and vegetables served their purpose, but had no real presence. Overall, it’s worth the extra money for the quality of the meat and cheese alone.

Just like the Instructional Building, where this sandwich heaven is situated, Panini Fresca is innovative, modern, and a little upscale. The panini version (referred to as the “Italian Club”) is a little more than the typical ham sandwich. They layer on sliced turkey, arugula, and a savoury garlic spread. But I have to admit, it’s the trademark panini press marks, toasted edges, and oozing warm filling that won me over. The warmth of this sandwich is particularly tempting when you’ve just walked in from the cold. Panini Fresca’s sandwiches are by far the most expensive on campus, but do yourself a favour once in a while and give in to the grill.