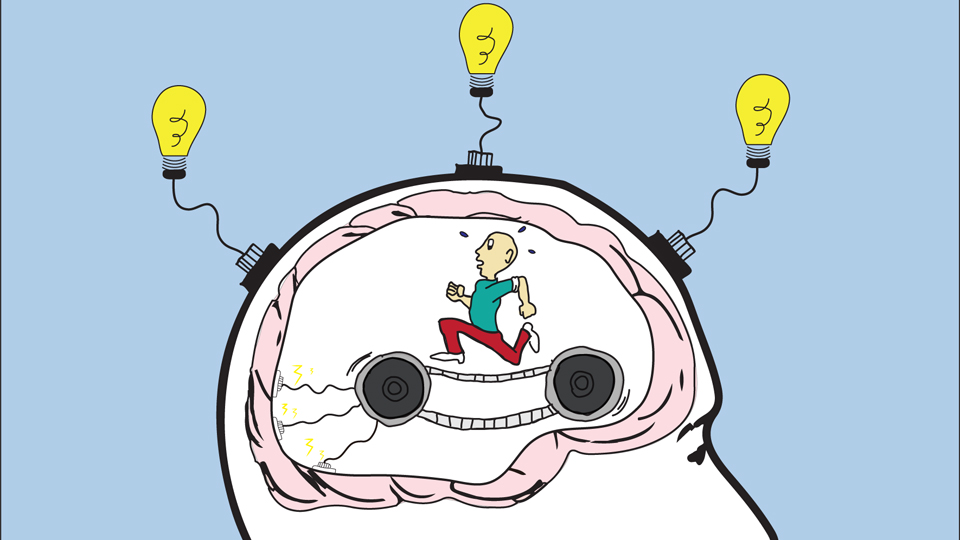 The physical endurance that exercise breeds may sharpen your mind over time. According to an emerging perspective on human evolution, the runner’s high—that weightless and empowering feeling of clarity you get after a run—can be traced back millions of years to how our brains first developed complexity in prehistoric times.

Picture our earliest hunter-gatherer ancestors as they hunted animals on foot, increasing their physical endurance with every stride. As humans began to outthink and outrun other creatures to secure food, our bodies and brains evolved simultaneously. According to David Raichlen and his fellow scientists at the University of Arizona, this evolutionary perspective gives exercise a new importance if we want to sharpen our minds. Does active movement play a part in the way our brain grows and reshapes itself over time?

In his article “Linking brains and brawn: exercise and the evolution of human neurobiology”, Raichlen draws on the traditional notion of “survival of the fittest”. According to this notion, only the most athletic and active members of a species survive and pass their genes on to the next generation, because they can compete for food more efficiently. Our species was not exempt. Through generations of active movement, the human body tended towards longer legs, an upright balance, and better agility. The body adapted.

Until recently, these two developments were thought to be discrete. Scientists believed that the mind became more complex because humans faced mental challenges, not physical ones. A similar philosophy—the separation of mind and body, the distinction between mind and matter—dates back to ancient times.

But Raichlen’s developing perspective on brain and body evolution suggests that these developments happened in parallel. In other words, the movement of our active ancestors shaped not just the way our body looked, but also the complexities of how the human brain works today.

Raichlen compared the physical endurance and brain size of certain animal species. He found that species like dogs and rats that can run quickly and for long durations tended to have larger brain volumes. Raichlen recalled a study in which rats were bred to be marathon runners; when these marathon rats reproduced with other marathon rats, their offspring were born with startling characteristics. The rat pups showed not only a high capacity for physical endurance, but also increased levels of a protein substance called brain-derived neurotrophic factor. Scientists link a surge of BDNF in the brain with increased brain growth. With more BDNF coursing through their brains and bodies, this generation of rat pups could move faster and think quicker. Their brains and bodies were changing at the same time.

Raichlen hypothesizes that our ancestors experienced a similar surge of protein, and that we might, too, when we exercise regularly. Our most active early ancestors would have handed down certain biological characteristics that characterize physical endurance, like increased levels of BDNF. This could explain the human advantage in brain size. With this new and increasing ability to reason, humans were able to devise complicated traps and plans to catch prey.

So when we work out, do we stimulate a healthy flow of BDNF through our brains and
bodies? In a New York Times
article, Raichlen  admitted that his theory of a movement-driven brain evolution remains speculative and, for now, unproven. In a Live Science article, he said, “The evolution of the human brain is probably the result of a lot of complex selection pressures interacting with each other. I don’t think we’re going to find just one pressure that drove all of human brain evolution.”

Still, studies continue to link exercise with neuroplasticity, or the brain’s ability to expand and alter in shape over time. A 2003 Behavioral Neuroscience study reports that mice that ran showed a significantly higher number of brain cells. A 2005 Nature study found that when young mice ran on a wheel regularly, they could navigate a maze faster than non-runners. And a 2010 article in Brain Research found that nine- to 10-year-old children who remained physically active had hippocampi 12% bigger than those of children who were out of shape. The hippocampus is a part of the brain involved in memory, learning, and spatial navigation.

Raichlen’s theory on how our brains evolved is speculative, but the body of evidence supports the core of his theory: through an evolution grounded in movement, hunting, exercise, and travel, the human brain is “wired to run”.