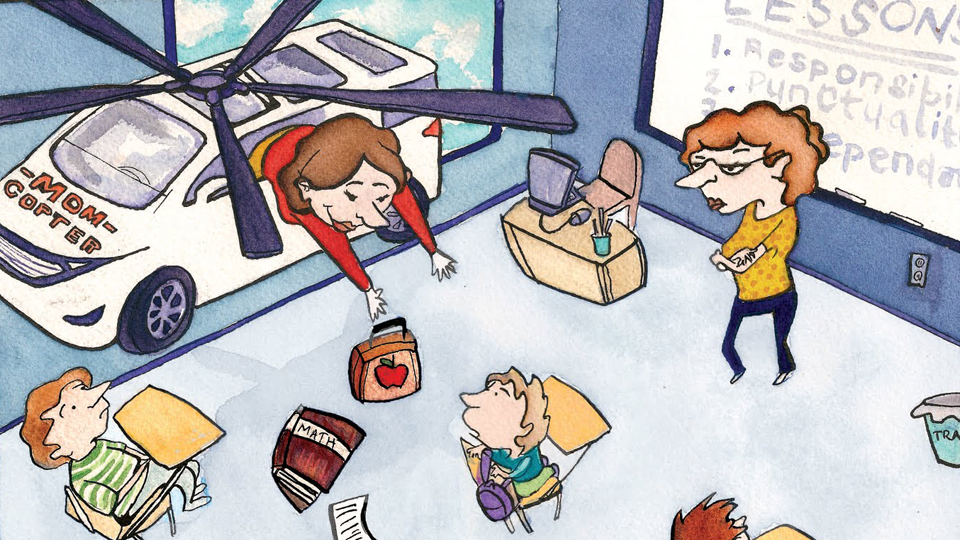 Nothing is more instinctive than parents wanting to protect their children, and the typical news story is no great comfort. But opinions are divided on what constitutes too much.

The Global Post published an article listing the negative psychological effects of an overprotective parenting style.

Children fail to systematically learn from their mistakes when prevented from making them, it argues, and this, in turn, leads to dependency, stunted growth, and poor self-esteem as they find themselves lacking competence in certain tasks.

The article also said that some parents can’t cut the cord even after their child has graduated and is ready to join the workforce.

The Post released a quote from a 2007 study by the Collegiate Employment Research Institute, revealing that some parents negotiate work contracts on behalf of their children. It’s these types of intrusions that lead to overprotected children’s dependency on their parents.

This dependency is just the tip of the iceberg. Individuals buckling under constraints of overprotective parenting may feel the need to go to extremes to prove their independence, not realizing the self-sabotage of their actions.

Katherine Putzig, an 18-year-old first-year humanities student, recounts her grad trip to Florida with her friends. Her mother, who came along with them, established curfew at 2 a.m. “One girl with us, whose parents had never really been there for her growing up, felt she didn’t have to follow that rule because she was an adult, and she stayed out till four in the morning every day,” says Putzig.

By contrast, Ella Wiernikowski, a 20-year-old second-year student, says her parents let her live her own life. “When I was 17, they let me move all the way to France for one year, only meeting the family once,” she says. “My youngest brother, on the other hand, now 16, barely knows how to warm soup, because my mother still does it for him. Whatever my brother asks her to do, she’ll do because he’s the baby and she loves him, but he’s not learning anything. My parents want him to go out and visit friends and have a life, but he has no desire to go outside because everything that he needs is in his bubble.”

This is exactly what the Post article warns about, quoting pediatrician Ramon Resa: “Overprotective parents essentially make children prisoners in their own home.”

A Toronto Star article by Paul Irish reported on the correlation between helicopter parenting and bullying, citing the University of Warwick’s Professor Dieter Wolke, who analyzed 70 related studies on bullying involving more than 200,000 children.

He found that when parents try to buffer their children from bullying, “They prevent [them] from learning ways of dealing with bullies, making them more vulnerable.”

“Parents must stand aside, allow their children to experience life—conflicts and all—so that they can learn how to deal with all the difficult issues that they will face in life,” says Wolke.

Irish wrote that negative parenting (ranging from abuse to overprotection) can turn children into easy targets for bullies because they haven’t developed the autonomy and assertion to fight them off.

“Children need support, but some parents try to buffer [them] from all negative experiences,” writes Wolke.

That’s not to say that the overprotective parent is damaging their child in every situation.

Marlo Young-Sponda, an 18-year-old second-year anthropology and professional writing major, finds her parents looking out for her convenient.

“They are protective, but they don’t want me to miss out on things,” she says. “Say I want to come to campus for a party. They’ll drive and pick me up, so if I’m drinking I’m safe—I’m not drinking and driving or taking the bus or sleeping at some guy’s house. They’ve achieved that nice balance where I do have some limitations, but at the same time I’m living a safer life and I’m still getting to experience things, but not the wrong things.”

The extremes may be rare, but they are there, say the researchers, encompassing both ends of the spectrum: handicapped dependency on the one hand and rebellious delinquency on the other.

Both outcomes are, of course, dangerous. “Research has confirmed that victims and children who bully but are also themselves victims, are more likely to develop physical health problems, suffer from anxiety and depression, and are also at the increased risk of self-harm and suicide,” says Wolke.

Resa attributes these effects to the same cause when she says, “Children eventually become depressed and suffer anxiety disorders that are attributed to obsessed parents.” She adds that parents who try to create a stress-free environment “often accomplish the opposite”.

The exact formula for striking a balance is hard to nail down. But the necessity of making at least some of our own choices, even if we pay for them, is clear. All of the students interviewed, regardless of their history, agreed with Wolke’s conclusion and believe that making their own mistakes is a necessary part of life.