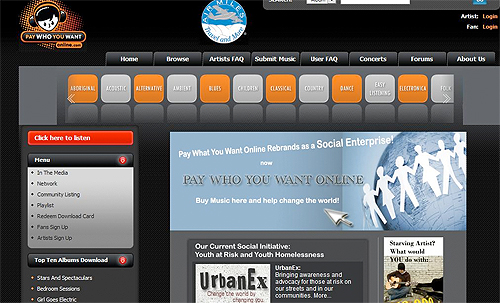 Pay Who You Want Online is a volunteer and contractor-run website on which musicians can post their music and fans can pay how much they want for a given download. The site was founded by Kim Le founded in March of last year as a means to generate profit for musicians and raise awareness of social issues affecting the community.

On the website, artists are offered promotions through print, online and college radio stations. The site also provides venues across Canada for artists to hold their concerts at and so increase their number of fans.

“At PWYWO, we ensure fair compensation and treat artists with the dignity and respect they deserve. We provide them with opportunities to showcase, promote and distribute their music online as 100% legal mp3 downloads. We do not force exclusivity and we claim no rights to the artist’s material. There is no fee for them to register or upload their music for distribution,” says Le, adding that international submissions are also accepted.

This nontraditional form of selling records is not exclusive to indie artists. When popular band Radiohead offered its third album, In Rainbows, at a pay-what-you-want rate, the album went on to become the band’s most successful. Le first came up with the idea for PWYWO from world-renowned Canadian musician Jane Siberry, who offers her music on a pay-what-you-want or can afford basis.

“I was at one of her concerts and I heard her express the same sentiments as other musicians about being undervalued and being treated unfairly,” says Le.

At PWYWO, musicians are guaranteed a base amount for every song that they sell and full control over their account, with no administration, registration or setup fees. Neither are they expected to satisfy any requisites for the kind of music that they submit.

“Music is subjective and what one person may deem to be good music may not be so to another,” says Le. “As long as a musician has CD quality music, and if they can carry a tune, we will accept it.”

A fan has full control over how much they pay and who they pay to. With no required membership and no obligation to buy, one can also listen to music before buying. Minimum amounts are set at CAD$7.00 per album and CAD$0.99 per song. Le attributes a deduction of 10-15% from each paid song as PWYWO administrative fees. Fans also have the option to support a local cause in their community with their purchase.

On January 23, PWYWO officially launched its first social initiative to raise $100,000 for UrbanEx and SKETCH to support youth at risk and homeless youths, using music and art. UrbanEx (www.urbanex.org) is a local Toronto nonprofit organization founded by Em Johnson and co-directed by long-time independent artist lobbyer Alan Waugh. Johnson and Waugh bring awareness and advocate for those at risk on our streets and in our communities.

SKETCH (www.sketch.ca) is a community arts initiative for youth age 15 to 29 who are homeless. The organization is directed by Rudy Ruttimann.

PWYWO is also holding a $10,000 contest for the top-selling artist on the site, who is determined by the most number of songs sold. According to Le, the inspiration for the award was “to motivate artists to participate, to help ensure artists are able to continue to make music for everyone’s enjoyment and a way to encourage artists to work more closely with [PWYWO].” The contest will end when PWYWO reaches the $100,000 goal for the fundraiser to support homeless youths.

More information about the fundraiser, contest and artist submissions can be found at paywhatyouwantonline.com.