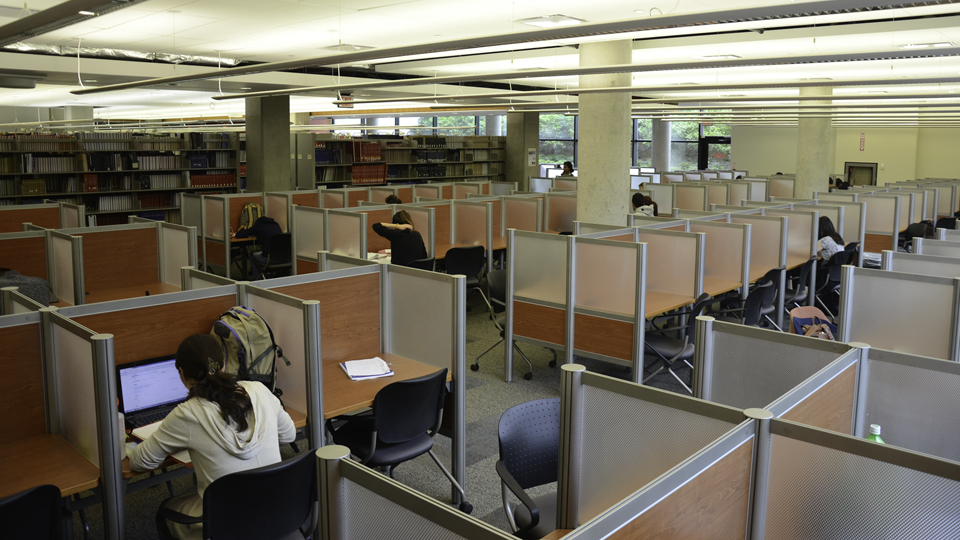 It’s that time of year again. Everyone is in track pants; messy buns and beards are everywhere; Starbucks, Tim Hortons, and Second Cup are making ridiculous amounts of cash; and the library is packed to the brim. Ladies and gentleman, welcome to exam season.

A large number of students have set up camp in the library. One thing you can expect is tempers running high. The library has a set of rules that everyone is supposed to follow, but not everyone does. (To be fair, they do their best to enforce these rules.)

Look, I know you’re dying to know if Sarah and Michael broke up. We’re dying to know, too. But there’s a time and a place. There are people frantically trying to find a computer to print their essays or assignments, and you’ve been browsing Facebook for over half an hour. Most months the library computers are a great way to waste time between classes, but in exam season, they’re a valuable resource. Unless you want to be on the wrong end of some nasty looks from the people trying to print, try leaving the computer to someone who needs it—and check Facebook on your phone.

“But—but—I need to be comfortable!” you stammer. “Also, check out my cute SpongeBob socks!” Yes, yes, they’re charming. Why don’t you Instagram a picture of them and I’ll check it out. After that, why don’t you put on a pair of comfortable shoes and proceed to keep them on your feet until you’re back inside your house. It’s gross—and actually a hazard. No one wants to trip over a pair of stray Uggs just chillin’ in the library hallways. Keep the library safe—keep your shoes on.

3) Whispering in the silent zone

I know what you’re thinking: you can whisper quietly and no one will mind. You just need to tell your friend that Sarah and Michael broke up. You thought wrong, my friend. When it’s actually silent in a silent zone, that’s precisely when you can hear the “psst, psst”. It’s unnerving, and everyone can hear what you’re whispering, so the entire area just heard you tell your friend that secret. If you really can’t control yourself, then exit the silent zone. Shockingly, that’s where the non-silent things are supposed to happen. If you’re too lazy for that, try messaging your friend in the many technologically silent ways available.

Cramming for an exam can tucker you out, no doubt about it. And many of us allow ourselves little naps in an all-nighter. (What’s a 15-minute nap in an eight-hour study session? Beesides, research says power naps are very effective!) But if this is during the day in exam season, you’re probably bugging someone. If you’re that tired, you should probably get out of the library and get to your bed. Besides, you’re taking up valuable study space, and your snoring is kind of ruining the silent aspect of the silent zone.

There have been a couple of instances of theft in the library. And during exam time, nothing’s scarier than the idea of leaving your laptop at your seat and coming back to find an empty desk. All your essays, all your notes—gone. (Despite all your professors’ warnings, you just never got around to backing up your documents.)

It’s fine to ask the girl next to you to watch your stuff while you run to the bathroom, to get some coffee from Starbucks, and so on. We can’t all be in the library for hours without getting up for a break. No, the real issue here is when someone asks you to watch their stuff… and then never comes back. So the poor girl waits and waits and waits, until it’s time for her to leave. Now what does she do? The bravest of us would just get up and leave. Who cares if some nameless person—even better, some jerk who’s been gone for a whole hour—loses their stuff? But UTM still has some nice kids, and they might keep waiting… forever.