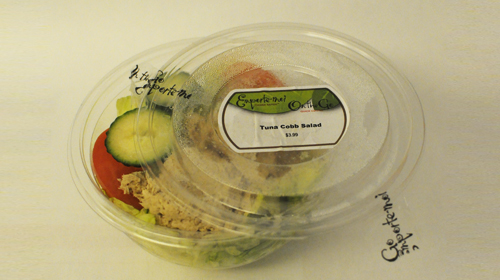 “How much did you say that was?” I ask the teller.

He repeats the amount—ten dollars and change. I stare at my tray. It only contains a smallish plate of stewed pork, steamed vegetables and steamed rice. Oh, and a Coke. There’s a Coke too.

I’m standing in the lineup at the Colman Commons Dining Hall. I’ve come here to interview Marc Bressler, president of UTM’s Residence Council, about how the campus food situation affects those who face it every day—residence students.

Right now, though, Bressler doesn’t say anything. He watches me with a bemused smile as I fumble for my wallet—the residence student getting a kick out of the out-of-residence student’s first encounter with the Colman Commons Dining Hall.

Once I’ve paid the bill, Bressler and I zigzag around the hall, looking for a place to sit.

“When you think about it,” says Bressler, “there are more places to eat at UTM that you’d think.” He’s right: there are two Tim Horton’s, one Booster Juice, one Starbucks, one Pizza Pizza counter and two Mr. Subs, not counting Mike’s Dog House, Circuit Break Cafe, Spigel Hall, the Blind Duck pub and the Dining Hall. According to UTM’s Food and Beverages website, dining locations at UTM total fourteen.

The problem is that many of these locations don’t venture beyond cookies and the odd cold sandwich. And even if there are more locations that one may initially estimate, there are too few food outlets at UTM for a community of 11,000 students and counting. The lineups stretching along most counters attest to this.

The complaints about outlets, however, do not compare to the two biggest ones about food on campus: cost and quality. Interviewing students on campus, I find not one flattering comment about the price or the quality of our food choices.

Umar Shah, a Psychology major, says that the quality of the food “is not good.”

“Particularly devastating” was all Marta Kisel, graduate student, had to say.

These are not infrequent complaints. According to Bressler, the words “quality could be better” and “too expensive” usually feature in residence students’ complaints.

“They are forced to buy meal plans, and those who live at OPH can’t even cook,” says Bressler. The meal plans he refer to range from $1,600 to $3,985 per academic year.

“The cost of everything’s going top, and that reflects on the food prices, which they just pushed on to us,” adds Bressler, referring to the recent 4.1 % increase in the price of residence meal plans.
In a town hall held by the Student Union last November, students complained about “the unsatisfactory food options on campus.”

UTMSU President Joey Santiago encouraged them to email Bill McFadden, director of hospitality and retail services at UTM, adding that a flood of emails might help change the situation.

Bill McFadden doesn’t mind students contacting him. “We’re always here for them,” he says.
This statement is not the only one that might surprise students. As we make our way to the Tim Horton’s at the South Building, down the hall from his office, McFadden gestures toward a set of swinging doors that lead to the Meeting Place.

“I always hold my breath before I go through these doors,” says McFadden, a 27-year veteran in the food services industry. “The lineup for coffee can be ridiculous.”

When I ask about the reason for such long lineups, McFadden argues that as UTM grows, the focus so far has “rightfully been on the academic program. Ancillaries, however have not been able to keep up.”

“We’re getting close to taking these facilities as far as we can. But we don’t have the infrastructure. Tim Horton’s in the Meeting Place […] is woefully undersized for a community of this size.”

Work is already underway to expand the food service options, especially given that both the new Health Sciences Centre and the Instructional will be finished in 2011, adding many students to the campus population. Spigel Hall, for example, will be moved from the underground level of the South Building and placed in the Meeting Place, on the ground level of the same building, along with new food vendors.

As for the food quality, McFadden knows students complain about it. But others have told him they actually enjoy it, he claims.

“Food is very subjective. There is no greater challenge in the industry than to feed the same people, five days a week, three times a day, for eight months. If you think of your favourite restaurant, you don’t eat there all that frequently. And you probably shouldn’t, because you’d get bored easily.”

Regarding the price of food at UTM, McFadden is quick to point out that the price of food has increased elsewhere—even in your run-of-the-mill grocery store. Moreover, UTM Food Services reviews prices yearly with Chartwells, the company UTM contracted for the provision of food on campus.

“If Chartwells wants to raise prices, they explain their rationale to us,” says McFadden. “We don’t always approve these prices and sometimes these discussions get quite heated. We take the figures that Chartwells gives us and we benchmarks against other institutions’ on a regular basis.”

When I ask him if Chartwells has a monopoly of food on campus, McFadden sums up his answer with the term “economies of scale.”

Universities that allow a number of operators to sell food soon discover, according to McFadden, that these operators can’t cover their costs when at times when business is slow, such as during exams and summertime.

Queen’s University, for example, has a longstanding tradition of allowing different food outlets to operate on campus. Yet lately many of these operators have found it challenging to operate during slow times of the year, says McFadden, adding that Queen’s is now going through a Request for Proposal process to find a new contractor.

A one-vendor solution allows the vendor to operate throughout the year, closing some outlets during slow times and reopening them when students flock back to school. Moreover, one vendor can adjust its prices knowing that in a given amount of time, it will have to temporarily close down some of its outlets.

“I love this campus,” says McFadden. “UTM’s the most culturally diverse campus I’ve ever worked in and that’s exciting—when we get where we want to go.”

Bressler agrees there is much work to do. “Students are largely in the dark about the inner workings of the food system. I don’t even have the contract with Chartwells.” But Bressler also says many students don’t bother trying to understand the system.

“They don’t even know who Bill McFadden is. And they should. Most meetings I’ve had with him have been very productive.” Bressler pauses.

“Except for being able to significantly affect the prices.”

“The forum was very well attended and very productive in terms of generating discussion about the community’s desire for enhanced food choice,” says McFadden, adding that the Meal Plan Office will conduct a survey toward the middle of March to obtain the community’s feedback on how to shape the Meeting Place food service plan.

One way or the other, I conclude while I chew on surprisingly decent stewed pork, this is the takeaway message: providing food for UTM is more complex that it seems, and Bill McFadden is the man to talk to about food on campus. So those who feel the need for change should be contacting his office.

The Meal Plan Office’s email is mealplan.utm@utoronto.ca. The office is located in Room 3093E of the South Building, open Monday through Friday, 8:30 a.m. to 4:00 p.m.