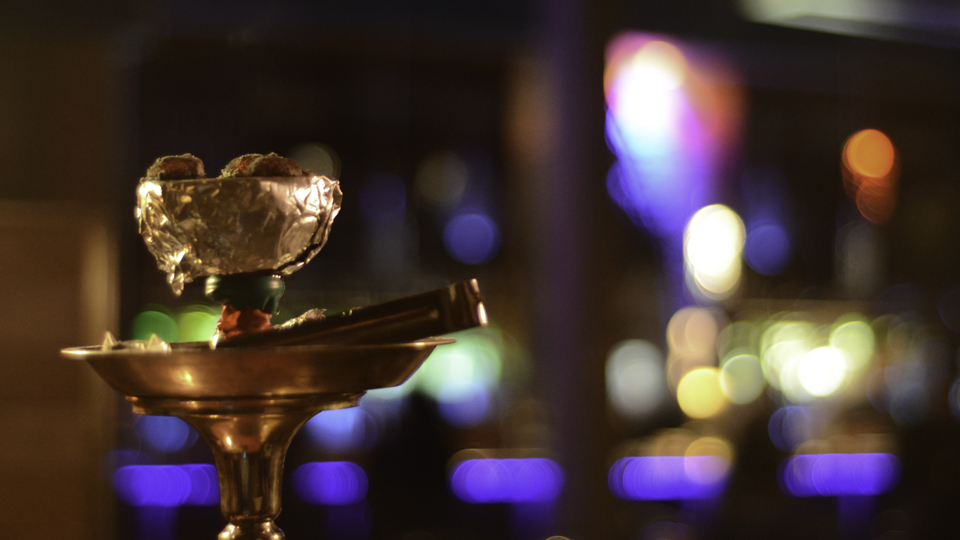 In an Italian household, round-bellied adults indulge in homemade wine and vats of lasagna, seated around a large pop-up table. Growing up in a tight-knit Italian community at a Catholic School, my childhood revolved around watching soccer and eating cannoli in my grandmother’s basement (heaven forbid you use the furniture upstairs!). I identified wontons with ravioli and shawarma with meatballs. Then I came to UTM.

Spending day after day on a multicultural campus does wonders for your palate. The Student Centre is a fount of free food when clubs campaign to attract new members. While my first interaction with a spicy samosa wasn’t the most pleasant dining experience, the fried delicacy has since become one of my favourite snacks.

As I joined more clubs and met students from unfamiliar parts of the world, I not only tried new foods, I also participated in unusual pastimes. A few years ago, the cigarette chimneys that stand outside the library started telling stories about shisha. When a friend of mine smuggled a hookah over the Mexican border, I had to give it a try.

Rami rolled off the plane with a black suitcase draped in fire engine red stickers that read “FRAGILE”.

“What’s with the decoration?” I asked.

“Yo.” Rami’s eyes darted to a Mexican customs officer. “I brought a shisha.”

“Oh, one of those things!” I laughed. “I don’t get it—what’s the big deal? What do you smoke out of that thing anyway?”

A hookah, also known as a shisha, argileh, or goza, is a water pipe used for smoking specially made tobacco (also called shisha). The tobacco is heated by a piece of coal, causing the smoke to pass through a chamber filled with water. The water is supposed to act as a filter. The smoke rises through a pipe and is inhaled through a mouthpiece. Hookah tobacco comes in a variety of flavours, like green apple and grape. The whole contraption reminds me of a fallopian tube.

The customs officer frowned at the computer screen as Rami’s luggage slid through the x-ray machine. The officer unzipped the case and rummaged through clothes until pieces of the pipe stuck up above the brim. A small bag of tobacco fell out of a sock and tumbled onto a pile of clothes.

Rami’s eyes widened slightly as the officer sniffed the bag.

“What is this?” The officer’s eyes scanned Rami’s face.

The officer dropped the tobacco onto the sock and zipped the luggage shut. After such an intense mission to transport the pipe, how could I not try the latest trend at UTM? Seated on a balcony overlooking a glistening pool surrounded by palm trees, I breathed in the rich, flavoured smoke.

“You have to hear bubbling.” Rami pointed at the cavernous base of the shisha. “That’s how you know you’re doing it right.”

This brings me to my first tip: don’t get overzealous and breathe in too deeply. Instead of looking smooth and collected, I coughed and hacked.

The editorial board at The Medium is divided on the issue of smoking. Every Sunday, some of the editors rise up from behind their iMac screens and zip up their jackets to stand outside the Student Centre and puff a few cigarettes. The rest of us stay inside and boast about our healthy pink lungs. When I recounted the story of my shisha experience, one editor exclaimed that I had moved over to the dark side.

Contrary to popular belief, smoking tobacco from a hookah is not cleaner or healthier than smoking cigarettes. Many shisha smokers think the water in the pipe filters out the harmful chemicals in tobacco. In reality, hookah smoke contains the same high levels of toxic chemicals as cigarettes such as nicotine, tar, and carbon monoxide, according to Toronto Public Health.

And yet the Medium team hit up a local shisha lounge on Saturday night. Like the hard-hitting journalists that came before us, we went undercover to investigate the scene.

Poorly lit streets and factory buildings occupy the west end of Dundas Street. The area is shady, to say the least—but that’s how you know it’s going to be a good time. Soft lighting and plush booths line the walls of Oko Blu, an Arabic-style lounge in Mississauga. The ground thumped as the DJ pumped his fist in the air and diners stood at their tables pumped right back, swaying back and forth.

The hookah in the middle of our table was just barely skimmed by the low-hanging light above. Our features editor, Carine, swiftly unwound the rubber hose from the pipe as our photo editor, Junaid, adjusted the coal that sparked red. Plates full of hummus, tabouleh, and kebab lay scattered around the pipe.

I held the mouthpiece to my lips and breathed in until the water in the pipe bubbled. As I exhaled and the smoke swirled around our heads, the flavour played on my tongue. We ordered the house blend, a concoction so top-secret that even the waiters are uncertain of the ingredients. Carine and I sipped martinis and scooped up chunks of meat and baba ghanoush.

The crowd of girls on the dance floor parted as a belly dancer swept in from behind the DJ, twirling the blue wings of her dress in circles. I leaned back against the leather seat and took another puff of the pipe, breathing in the orangey flavour. The belly dancer wound around tables, gyrating her hips and twirling her hands in the air. People rose from their seats and clapped their hands over the heads, cheering her on.

In adherence to the Smoke-Free Ontario Act, local shisha lounges are supposed to be tobacco free. The World Health Organization reported that 40 minutes of smoking shisha is the equivalent of smoking 100 cigarettes due to the passive nature of the hookah.

As girls left the dance floor, we wound the rubber hose around the pipe one last time and zipped up our jackets. Weaving around tables and dancers, we stepped past the glowing embers of the dying coal. Snow crunched beneath my heels as we headed past the sturdy security guards.

I kicked snow at Carine. “So where can I get a shisha?”