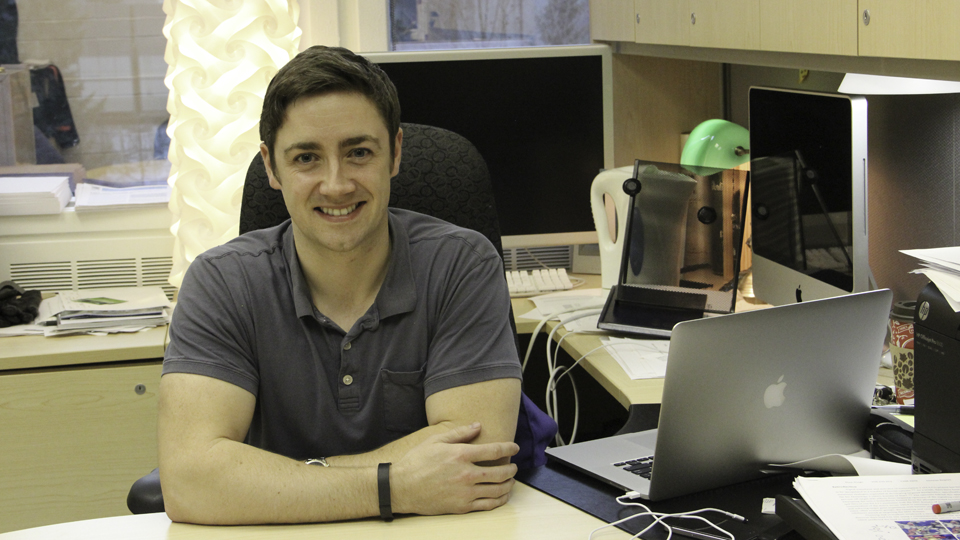 Patrick Gunning, PhD and associate chemistry professor at UTM, has been presented with several awards throughout his young career. Just last year, he was presented with the 2013 University of Toronto Inventor of the Year and the 2013 CSC Ichikizaki Fund for Young Chemists and listed on Toronto Star’s Top 10 to Watch in 2013.

What makes Gunning such a notable name is his research on developing molecules targeting protein-to-protein interactions, specifically the interactions involved in cancer cells. He and his team have created molecules that delay these interactions between proteins called STAT3. When these proteins interact with one another, they are responsible for abnormal cell growth—a growth that can create tumours. Preventing these interactions could lead to a cancer treatment.

Patrick Gunning sat down with me last week to discuss his research and his goals.

The Medium: You’ve won quite a few awards already. How does it feel to be named CRC?

Patrick Gunning: It’s a very big honour because I think it’s very prestigious. And I didn’t think I’d get one when I was in Canada. It’s very nice.

TM: Was CRC something you were working towards?

PG: Since coming here, I think it has definitely been one of my goals to be a CRC.

TM: Do you think that you’re living up to the title of being one of Canada’s most innovative thinkers?

PG: I’d say no. [Laughs] I haven’t achieved what I want to achieve yet. I don’t think I’ll be happy until I have a molecule in clinical trials.

TM: You were interviewed by the Toronto Star in December 2012. How far has your research come since then?

PG: It’s come a long way. The goal is to be in phase one clinical trials by 2015. I think we have a very promising molecule which has now been validated in numerous different human cancers and in animals. So I think we’re at the stage where we’re ready to go forward towards advanced pre-clinical trials, which is the next stage for us.

PG: Well, that’s just one molecule against one target protein, but we have a whole bunch of other molecules targeting other target proteins in other diseases. And there’s no guarantee that the molecules we currently have in advanced preclinical trials will work, we just have to keep on coming up with new and improved inhibitors so that when that one fails, you’ve got another attempt.

But I think the targets we’re going after are good targets, and I think that if we do it properly, it’ll help cancer patients. Maybe not cure them but extend and improve their life.

Certainly the molecules we’re making are low-toxicity, so it should make the treatment of cancer less toxic.

TM: How are you handling the weight of being someone who could potentially be responsible for curing cancer?

PG: Well, I don’t think there’s a huge expectation for me to cure cancer.

PG: ’Cause it’s hard. [Laughs] I don’t think there’s an expectation that I’m going to cure cancer but I think my goal is to add to the information that’s currently available, to further the signs, and hopefully add data that will help either myself or someone else to cure [it].

TM: In your Toronto Star article, you said that sometimes these medications don’t translate as well from mice to humans. How are you combatting this?

PG: Obviously, we have to start off in a living system, such as a mouse, but the metabolisms are slightly different. One way for dealing with the issues of metabolism in a human is to look at human liver microsomes and predict metabolites. My job is to develop molecules that target a human protein with the highest binding potency and selectivity possible, and also to improve its metabolic stability to human metabolic enzymes so that when it does go into a human, it has the best possible chance of working.

In terms of specifically trying to improve it from mouse to human, I don’t know that that’s something you can do. I think you just have to make it the best that you possibly can from the outset and hope that that’s going to translate to humans. I think if you can hit your target protein with high potency and selectivity, you’ve got a really good chance.

TM: What are some things that are still being improved on in your research?

PG: Bioavailability. We’re trying to improve the length of time that our molecule stays in a living system. So we’re trying to extend it—the time that the molecule is in the body and is therefore exerting a biological effect, which is to shrink the tumour. That for us is the main thing. Metabolism breaks down molecules really quickly and our goal is to try and slow that process down. So we’re making modifications to our structure to give it a longer life in a living system.

TM: There have been a lot of cures out there that have fallen short. How are you and your team working to ensure the success of yours?

PG: The main problem with a lot of drugs once they’re in humans is that you get resistance. We’re targeting transcription factor proteins. Hardly anyone targets transcription factor proteins, so we don’t know how readily the proteins will mutate to acquire resistance. I would say we’d have to be ready to make compounds to overcome this reaction if it happens. But we can’t do that yet because we’ve never been in humans.

PG: I play squash, tennis, badminton, and pool, I run, and I paint. I’m trying to find more downtime and get a better work/life balance, but it’s difficult. One of my New Year’s resolutions was I was going to try and have more relaxation time, so I got myself a pool table.

I like to travel but I do that as part of my job. I’m going to Vienna this year, I’m going to Shanghai. […] My favourite new TV show is Derek.