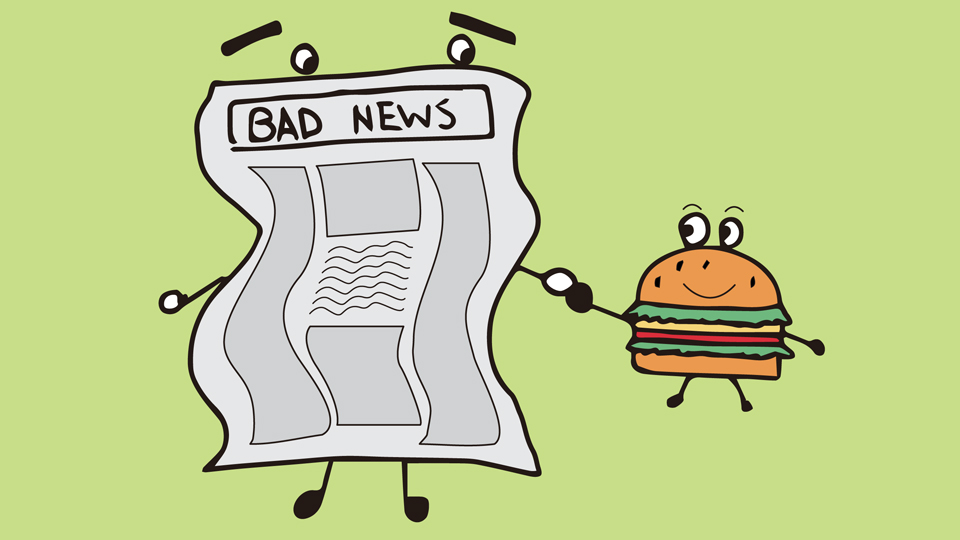 “Suicide bomber strikes US embassy in Turkey. Greece protestors storm labour ministry. Threat of identity theft leaves Canadians feeling vulnerable.” These are just some of the headlines this morning. They’re pretty standard headlines, but they conjure up a difficult, harsh, and scary image of our world. How’s a person to cope? How do you cope? A recent study suggests many of us handle harsh headlines by shuffling over to the pantry and scarfing down a chocolate bar, or by switching our breakfast orders from oatmeal to an Egg McMuffin (“Extra bacon, please”).

But if our brains know we should make healthy choices, why do we tend to fill up on anything fried or cheesy? Dieticians have hypothesized several internal reasons for which people choose high-calorie foods. Maybe they’ve underestimated the number of calories in the food. Maybe they’re just tempted more than they can resist. In contrast, one study focussed on the external reasons—in particular, a harsh environment.

Researchers Juliano Laran and Anthony Salerno suggested that we indulge in more filling and calorie-packed foods when we perceive our immediate environments as especially harsh or unpleasant. We subconsciously look for cues in our environment that tell us our survival resources are scarce. When we get these cues, our instincts kick in and we indulge in the most satisfying food available.

“People make a deliberate decision to go with something more filling or higher in calories when they perceive that resources are scarce in a certain moment of time,” said Salerno.

In their study, Salerno and Laran set up what students believed was a booth for taste-testing chocolate on a college campus. They invited passersby to sit down and provided them with bags of M&M’s. The researchers gave half of the volunteers bags they described as “high-calorie, highly rated imported ingredients”. The other half of the volunteers received bags described as “low-calorie, highly rated imported ingredients”. The researchers further divided the volunteers into a harsh environment condition and a neutral environment condition. They placed posters with the words “survival”, “adversity”, “shortfall”, “persistence”, and “withstand” directly in front of those in the harsh environment condition, and posters with neutral words “the”, “cat”, “ran” directly in front of us the neutral condition volunteers.

Salerno and Laran wanted to see which group ate more M&M’s, and within that group which type of M&M’s (high or low calorie) was eaten the most. They discovered that in the neutral condition, participants who thought the M&M’s had lots of calories ate the  same number as those who thought the M&M’s were low in calories. This means that in a neutral, non-harsh environment, the choice between high- or low-calorie versions is arbitrary. But in the harsh environment condition, the volunteers given high-calorie M&M’s ate much more than those given low-calorie M&M’s. Why did more students eat more high-calorie M&M’s when they saw the posters designed to trigger their survival instincts?

An individual’s environment determines whether their behaviour reflects slow or fast life history. In harsh environments of competition and scarce resources, there is immediacy and urgency in every decision because the future is uncertain. In such cases,  people resort to a fast life history, or the instant gratification of their desires.

When it comes to environments that are more stressful than they are scarce in resources, does our instinct to seize our chance and save our own skins kick in?

Salerno and Laran acknowledge that their theory is debatable. Other reasons have been posited as to why we overeat and choose chips, cheeses, and hamburgers when we’re surrounded by stressful news headlines, term papers, and exam deadlines. It may just be that we’re stressed, and hormones associated with stress prompt our bodies to crave high-calorie and fatty foods. Or it may be that high-calorie foods are simply more appealling to our senses. Whatever the reason, Salerno and Laran’s study seems to suggest that understanding the thought process behind our choices can lead to adopting healthier eating habits. Salerno recommends using this information to become more aware of your environment and the influence it has on you. He also talks about being aware of the subtlety of the power of these influences.

Then again, like the stereotypical woman in a romantic comedy who gulps down chocolate ice cream or guzzles whipped cream straight out of the can, we all have our favourite high-calorie foods that we just need to get us through a rough time.