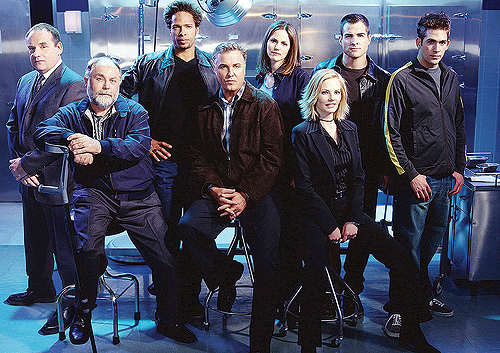 You are alone in the lab. It’s late, but an important murder investigation demands that you stay to run some tests. You scan the fingerprints you have retrieved from the murder weapon earlier today. You press a few buttons and a “MATCH FOUND” pops up on the screen. A big smile spreads across your face. This is why I got into forensics, you think to yourself. This is what forensics is all about.

Every week, millions of viewers watch as Dr. Raymond Langston, Catherine Willows and Nick Stokes work with the rest of their team to solve crimes on CSI: Crime Scene Investigation. Since the show premiered in October 2000, it has enjoyed enormous success. In fact, 35.1 million people watched the fifth season’s two-hour finale, “Grave Digger.” The show’s success has also led to spin-offs CSI: Miami and CSI: New York, which premiered in 2002 and 2004 respectively.

A show this popular must impact a lot of  people. Indeed, the impact has been so significant that it merits its own name—the CSI Effect.

The CSI Effect refers to the sudden rise of applications to forensics programs and to a change in people’s expectations of forensics due to the inaccuracies in forensics-based shows. Because of the CSI Effect, many schools are now trying to emphasize the differences between forensics on television and real-life forensics.

Dr. Karen Woodall, a forensic toxicologist at Toronto’s Centre of Forensic Sciences, believes that some students are taking the program solely because of CSI, although many of them don’t realize what it takes to be in the field of forensics.

Universities at Lakehead, Laurentian, Trent, Windsor and Toronto all offer forensics programs. The University of Toronto’s Rotman School of Management even has a forensic accounting program, while UTM is home to one of Canada’s oldest forensic science programs. Its first class of nine students graduated in June 1997. Now, the program receives hundreds of applicants each year. Around 300 students enroll in the introductory forensics course, FSC239. According to one of these students, Steph Kolodij,“The only reason [forensics] became an option for me was because of CSI.”

One of the criticisms of shows like CSI is their inaccuracies, which lead to a distorted view of what forensic science is. Dr. Woodall insists that it is not an easy job.

“With my students, I try to get across that you have to have a real in-depth knowledge of science. Some students don’t realize this and now they’re struggling,” says Dr. Woodall.

She also notes that there are inaccuracies in what people do which jobs. “On CSI, police practically do forensics. Real forensic scientists are independent from the police. Hardly any of us ever go to the crime scene.”

CSI sparked an interest in forensic science for Andrew Rozendaal. But the fourth-year Forensic Anthropology student is aware of the realities of his program. “In forensics, every individual is a specialist in one area. The specialization in a field is what gives you credibility. When you start doing everything, you lose credibility,” Rozendaal says.

The equipment in these types of shows is also commonly misrepresented. According to Rozendaal, a lot of the tools have not even been invented yet. (One example is the computer program that swiftly matches fingerprints. In reality, the matches are made by trained scientists looking at scanned pictures and finding unique patterns).

“Sometimes [my colleagues and I] discuss how great a piece of equipment would be if it actually existed,” jokes Rozendaal.
So is the work done in forensics more time-consuming? Duller?

Dr. Woodall, who watches about two to three episodes of CSI per season, finds it amusing that “everything’s wrapped up in an hour.” In real-life, she says, tests can take months to complete.

“Jury trials expect all the bells and whistles. Sometimes I have to explain why a report took six months to do. They expect CSI. They also expect you to do every test possible for each case. Forensic scientists only do relevant tests.”

Jessica Lam, a second-year biology and scientific anthropology double major and 2009-2010 president of the  UTM Forensic Club, says that the first thing she was told at the information session for the forensic science program was “This is not CSI!”

“They told us that forensic science is not glamorous,” recounts Lam. “It’s slow, frustrating, [and it’s] hard to find evidence, and you spend hours in labs doing the same thing over and over again. They make FSC239 hard to weed out people who aren’t in it for the right reasons.”

Even though the CSI Effect can give people the wrong ideas for applying to forensics programs as well as unrealistic expectations for the way that forensic research is conducted, prospective students can avoid this by focusing on personal reasons for their interest in forensic science.

Dr. Woodall, too, enjoys her career because “although there’s a lot of work and you’re under pressure to get things done, each case can be unique. It’s very rewarding when your work helps solve a case.”

So, let’s try this again.

You are alone in the lab. An important murder investigation demands that you run some tests. You scan pictures of a fingerprint that was found on the murder weapon. After days and days of analyzing the fingerprint on your own, you finally make a match. A big smile slowly spreads over your face. This is why I got into forensics, you think to yourself. This is what forensics is all about.