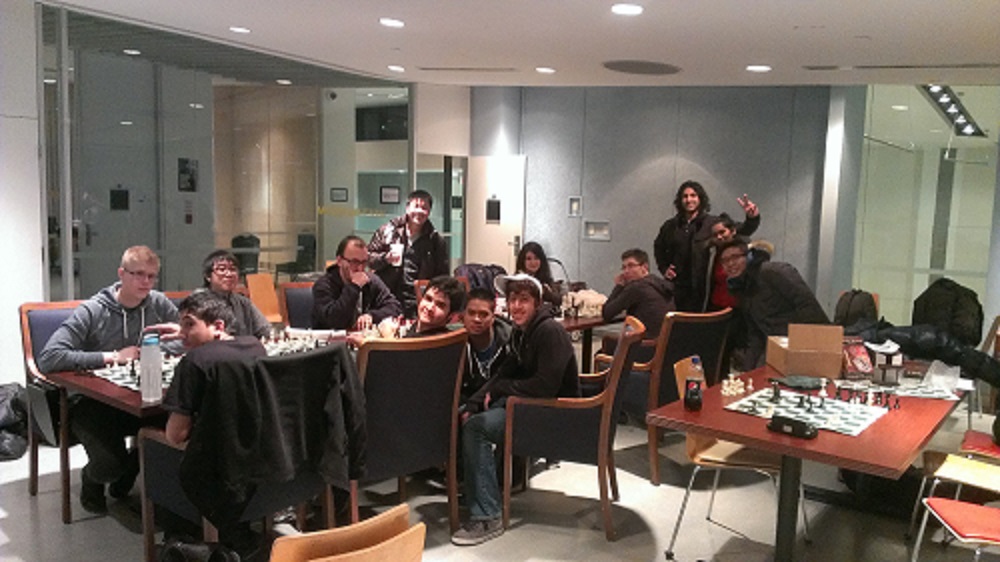 There are ancient references to an Erindale chess club in old issues of the the Medium. A prominent one exists at St. George to this day, but there has been neither hide nor hair of one at UTM. Until now, that is, founded this year by student Ivan Manasuev, and having held their first tournament just before Reading Week.

Manasuev says the idea to create a chess club came to him when he noticed a good amount of student interest on campus. A long-time chess player himself, he decided it was time to bring chess to UTM. The original membership was 15 and has now about doubled, including some 20 who consistently showed up twice a week for their Monday and Wednesday meetings. The increase of this number is also no doubt due to the work of the other executives, he says, including Karolina Stancel, Susie Gretka, and Prateek Sanyal. Most of the members play regularly, but the club also offers two teachers to help those who haven’t been playing as long.

There are high hopes for membership expansion and competing against other schools in chess tournaments. Their internal tournament on February 7 was a marathon of six hours, with trophies going to the top three players:  Alex Vilch, Seiji Nakagawa, and Gael Jacquin. “The reason why we had one so early was because we had a lot of players so involved in chess that we decided to make it a little more interesting for them,” says Manasuev.

He added that the club also wanted to give members experience and the chance to prepare for an external tournament that Manasuev says will happen by the end of the year.  “For now, we’re thinking about Glenforest Secondary School and the St. George University of Toronto Chess Club,” he says.

There’s also an online group set up at chess.com where members are encouraged to compete. The club also offers classes through MiniSkills, which are small sessions organized by clubs, academic societies, and student instructors on campus to provide opportunities to boost skills.

For the time being, all interested students are invited to “join the UTM Chess Cub and show us your checkmate”.